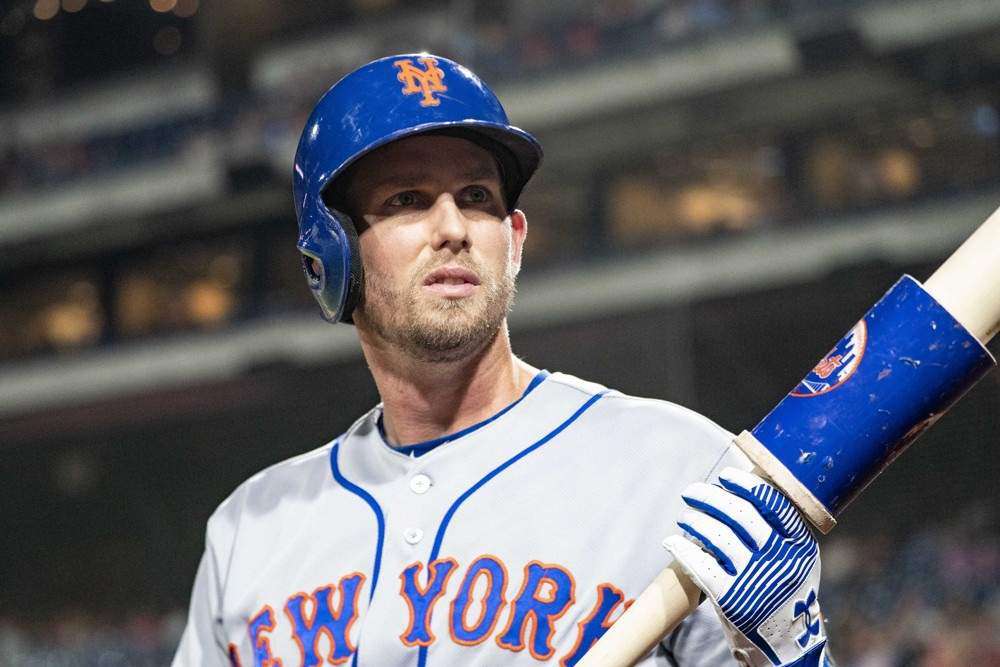 First and foremost, thank you all for taking the time to read this! You are a dedicated fantasy baseballer, reading articles into the final week of the season. I also thank you if you’ve been reading all year. Hopefully, I’ve helped you out in some way, shape, or form. Whether that’s the case or not, always feel free to hit me up for some baseball banter on Twitter @NathanDokken during the offseason. I’ll also be recording Fantrax Dynasty Baseball episodes all offseason if you’re looking to quench your thirst for prospect knowledge.

Anyhow, this will serve as the final installment of Fire & Ice for the 2018 season. I’ve really enjoyed my first season with Fantrax, and I also thank them for giving me the opportunity to contribute this year. Here in our final adventure for this season we’ll look at some of the most interesting names from the second half of the season and spin it towards 2019 draft value.

If you look up “prospect pedigree” in the dictionary, it will have Jeff McNeil’s name listed as an antonym. Completely unheralded as the 356th player drafted in the 2013 Rule 4 Draft, McNeil has burst onto the scene for the Mets in the second half. Since he debuted on July 24th, McNeil has slashed a rather tubular .337/.391/.500. That’s the exciting part. The less tubular aspect of his results are the three homers and five steals over 204 plate appearances. How much of McNeil’s production is to be believed and how much is a mirage?

First, to further grab your interest, I present to you his strikeout and walk rates: 5.7 BB%, 10.0 K%. Not too shabby. That strikeout rate is good enough to be the second lowest in baseball over the second half of the season, trailing only Jean Segura by less than one percent. Looking into his plate discipline backs up this low K-rate. He has a very nice 8.1% swinging strike rate while making contact on 85.6% of his swings. He does, however, expand the zone more than you’d like, with a chase rate of 36.3%. Does this add up to a 10.0 K% over a full season? Probably not, but it is enough to expect him to sit in the low-to-mid teens.

The walk rate looks good when you sit it next to a tiny K-rate, but in the grand scheme of things, it’s below-average. He’s one of the most aggressive hitters in baseball, swinging at 56.7% of the pitches he sees. That’s the 14th highest rate in MLB (min. 200 PA). He makes a ton of contact, but his aggressive approach negates some of that value.

As a left-handed hitter, he has impressed by avoiding platoon splits. His 141 wRC+ against lefties nearly equals his 145 mark against righties. That has helped him maintain that uber-high .335 average. Of course, with a high average comes high BABIP’s, and McNeil’s is definitely inflated at .367. Is it deserved? We check his batted ball distribution for clues!

The first thing that stands out – or rather, doesn’t stand out – is his 31.1% hard contact rate. It’s below average, which already gives me some pause. However, there are other aspects to like. He sprays the ball pretty evenly to all fields, and does one thing that I wish more players without much power could do: hit under 40% fly balls! Power isn’t his game, and he knows it. Rather than killing his BABIP with a ton of fly balls (like Scott Kingery has done in the second half, hoo boy), he is focusing on line drives and getting on base. That’s a great way to keep your BABIP elevated, but .367 is a touch too much. There I go with the classic rock references again.

What is really going to limit McNeil’s value in 2019 is the lack of category juice. His power is pretty average, and the stolen base potential is well below that. He’s like a poor man’s DJ LeMahieu really (which maybe is just LeMahieu outside of Colorado), which is only the case as long as he continues to hit second in that lineup to score lots of runs. He’ll be an endgame option for most of those drafting in 10-12 teamers, but he’ll definitely play a role in 14 team leagues and deeper as a solid overall middle infielder.

Carlos Correa was one of the top picks off the board this year, and why not? The first overall pick in the 2012 draft was coming off an injury-shortened 2017 in which he still batted .315 with 24 home runs in 109 games. He was having a solid first half, batting .268 with 13 home runs. Unfortunately, he wound up missing a month and a half with a back injury. He didn’t debut in the second half until August 10th, and things since then have not been All-Star worthy.

Since his return from the disabled list, Correa has hit just .174/.257/.223 with one lonely home run over 140 plate appearances. If you take the name away from that stat line, that player is un-rosterable. So what the heck is going on? 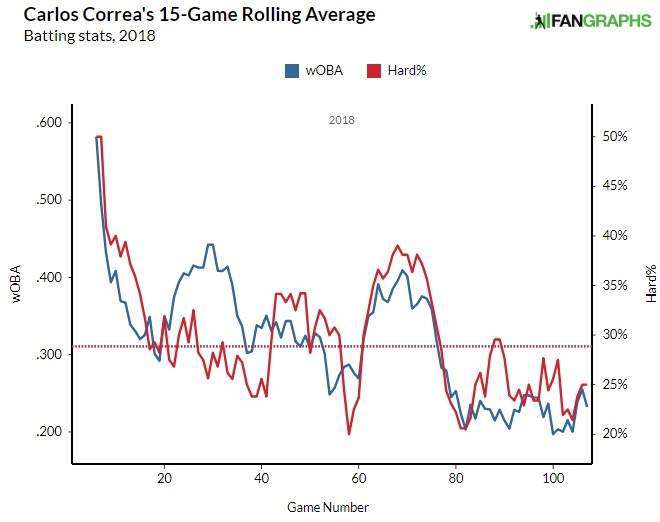 While Carlos Correa has maintained his normal plate discipline, the hard contact just hasn’t been there. It has been below-average since his return, and you can see what an impact that has had on his wOBA. His BABIP is just .211 over the second half due to a couple of reasons; namely, his 24% hard contact rate. However, when you combine that with a 40%+ flyball rate and 12.8% pop-ups, your BABIP will die in a fire really quickly. Soft- and medium-hit fly balls are outs nearly as automatically as pop-ups.

This has to be a lingering issue with his back. The Astros have essentially conceded that he isn’t right by lowering him to the 5-6 spots in the lineup, and manager AJ Hinch recently stated Correa is “not feeling great”. If you’re fighting for every home run and RBI in your standings over these final days, you have little choice but to cut Correa in search of better options. For 2019, I expect a decent discount from what you paid this year. This will be the second straight year he’s missed considerable time, and without a ton of stolen base upside, his overall value isn’t as nice as other shortstops like Francisco Lindor and Trevor Story. Carlos Correa will still be just 24 years old and hit in the middle of a tremendous Astros lineup though, so there is still plenty of value to be had if the price is right.