Before getting into the article, it only feels right to tip your hat to Carlos Carrasco. In 2019, Carrasco was diagnosed with chronic myeloid leukemia and battled back to finish the season on the mound. The road to recovery was most certainly not easy, and there were likely times of doubt, but his strong character and persistence shined. Last year was no picnic for anyone, and with the opt-out allowed, it wouldn’t have shocked us if Carrasco sat out in a time of uncertainty. Instead, Carlos finished the shortened season with 68 innings pitched, sparkling 2.91 ERA and 82 strikeouts. If you drafted him, you were pleasantly pleased after the disastrous 2019.

In this article, we will dive into how effective Carrasco has been in his career while also looking at the pitches that have made him successful. Lastly, we will glance at his 2021 outlook and if the draft day price justifies the selection.

The 33-year old pitcher has a career 21.4 WAR since 2009. He has been a staple in the Cleveland rotation for the better part of a decade. Most notably, from 2015-2018, he racked up 60 wins with a 3.12 ERA and received Cy Young votes during that timespan. It’s safe to say, Carlos Carrasco is an excellent front of the rotation starting pitcher for any MLB staff.

If you look at the span of 2015 through the present day, Carrasco is the mark of consistency. The lone blip, which could lead to some recency bias, is 2019. That was the season diagnosed, and spent months recovering before making a return to the bullpen. When you look at the SIERA, xFIP, and SwSTR%, it all falls in line. Remember, 2019 was the year of the bouncy ball, causing home run rates ballooned. For all these instances combined, he gets a pass from me. 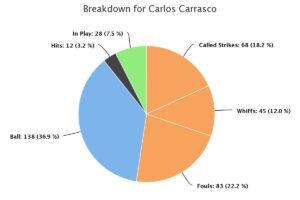 The Four-seam fastball(4SFB) was thrown nearly 35% of the time in 2020. With an average velocity of 93.6-mph, it’s not the electric speed to blow it by hitters. The intriguing part about this pitch is Carrasco’s ability to maintain an above league-average 11.8% SwStr% and producing a 30.1% CSW, especially considering that mild velocity. Overall, he keeps the ball in the zone quite often and tries to stay ahead of batters with it. This is, no doubt, a go-to pitch when Carrasco needs a strike. 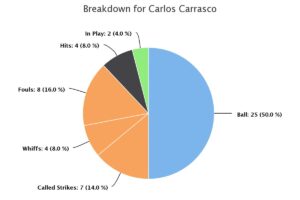 The sinker is a much tougher pitch to nail down given the small sample size of 2020, and it was only utilized 5.4% of the time. Much like all sinkers thrown in the MLB, they don’t generate much in the swing and miss category and get hit pretty hard. Carrasco’s lived up to the mantra as best it could. The CSW was a measly 18.3% while also giving up a robust .447 wOBA. So you ask, why throw them at all? Groundballs-there was a 75% ground ball rate attached to all balls hit in play. Although as you can see from the pie chart, the sinker ended up being a ball more times than resulting in a strike. The good news, the usage of the sinker continues to drop and could be non-existent going forward. 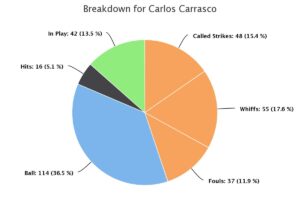 Carrasco’s slider has been a staple in the repertoire; in fact, it’s the second most thrown pitch. Rightfully so-it has a 33.5% CSW and 18.0% SwStr%, while only having a .216 wOBA against. Throughout the course of Carrasco’s career, the slider has racked up more strikeouts than any other pitch year after year. There is some slight concern on my part, as the SwStr% has continued to tumble as he gets older. If the wheels start to fall off of this, his overall K% could fall off. 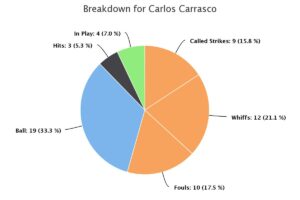 I hope the slider’s concern didn’t scare anyone off because there is another noteworthy breaking ball in the mix. The curveball was hidden away in his lackluster 2019 but found it’s way back somewhat. At only a 5.2% usage, the curveball was shown last season than in 2019. Personally, I think this pitch should be showcased even more. The curveball only had a .177 wOBA against and 20.0% SwStr%. We can argue that it could be less effective if it’s thrown more often, but with the slider dropping off slightly, it is time to increase usage. 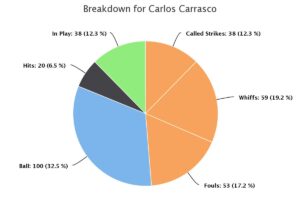 The underappreciated pitch for Carrasco is the changeup. The slider may get all the love because it shows up as the main strikeout pitch, but changeup is foolish. What makes the changeup so effective is the 33 inches of vertical drop, which is 13% better than other changeups thrown at a similar 87 mph. The place to put this pitch is just out of the zone and make batters chase. When he is commanding the pitch just outside the zone, it is getting a 29.8% CSW and sits in elite company with Devin Williams(35.2%), Kenta Maeda(33.5%), and Zac Gallen(28.7%). 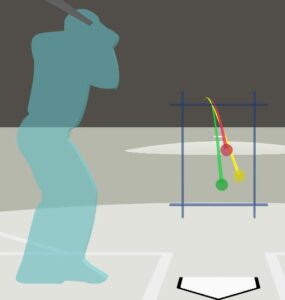 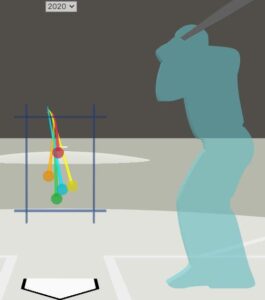 The photos above look at the pitches thrown to a batter and the basic movement of each pitch. While Carrasco harnesses five different pitches at his disposal, he actually uses them very differently based on a batter’s handedness. The term that comes to mind is crafty.

In the above chart, Carrasco threw his four-seam fastball more than any other pitch in 2020, but it was not the most thrown pitch based on a hitter’s handedness. Carrasco leans heavier on the slider to right-handed hitters and the changeup for the left-handed hitters. The home runs have plagued Carrasco’s career quite a bit. The four-seam fastball is responsible for a majority. I guess that Carrasco is trying to trade out some fastballs and reduce the number of home runs.

Carrasco was part of a major blockbuster trade that sent him and teammate Francisco Lindor to the New York Mets. The new home ballpark is quite spacious and could lend a hand to the pesky home run problem as well. Don’t forget to add that the Mets are projected to be a much better team than Cleveland, and we could see an even higher win total. I wouldn’t expect a massive bump, but it is possible.

The projections put Carrasco at 174 IP with a 3.88 ERA, 1.21 WHIP, and 193 strikeouts. These numbers fall right in line with his career numbers, maybe being a little generous on the number of innings pitched because he has only eclipsed that number three times since 2009. None the less, it’s hard to argue with much less production based on an extensive track record.

He has an ADP of 77.38 while being the 27th pitcher selected. Starting pitching is being pushed way up draft boards, and I can see the ADP jumping up even more after the trade. The strikeout potential is there, and Carrasco checks many boxes to make him worth the early draft investment. Draft Cookie with confidence.