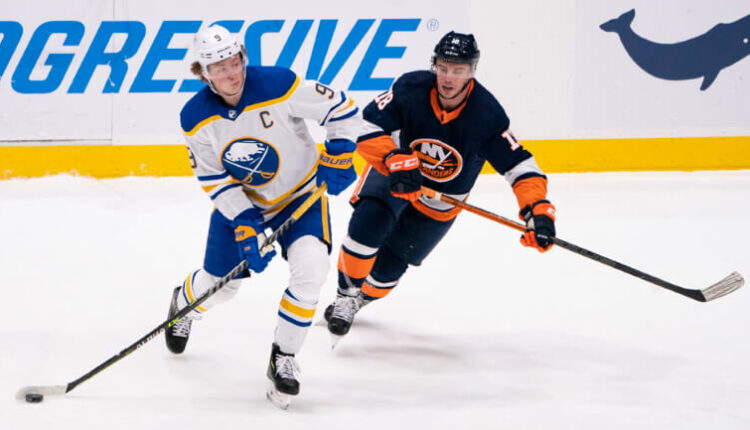 Jack Eichel was traded to the Vegas Golden Knights for Peyton Krebs, Alex Tuch and two conditional draft picks. Eichel will now have herniated disc surgery and his timeline to return is 3-5 months. From a fantasy perspective, there are plenty of risks associated with having Eichel on your team, but the upside is tremendous.

The risks as I see them are as follows:

On the flip side, I believe the reward is worth the risk. We’re talking about a 25-year-old star who will no doubt be a top 10 pick in next year’s fantasy drafts. He has 66 goals and 178 points over 166 games the past three seasons and that was done playing with some pretty mediocre teammates in Buffalo. Now he will have the potential opportunity to play with Mark Stone and Max Pacioretty once everyone is healthy.

Eichel is only rostered in 85% of Fantrax leagues so if he’s available in your league, you need to pick him up immediately. If you’re in a head-to-head league, I also see him as a buy opportunity. This works best if the fantasy team with Eichel on it is not currently in a playoff spot and you think your team is playoff-caliber. Send the GM an offer that can help them now and will get you Eichel, who could be a league-winner when he returns just in time for fantasy hockey playoffs.

Robin Lehner off to a Slow Start

Robin Lehner was one of the first four goalies off the board in most fantasy hockey drafts this year and those that spent an early-round pick on him can’t be happy with his performance so far. He has 4 wins in 9 starts and carries a 2.89 GAA (32nd in the NHL) and .915 save percentage (24th in the NHL).

The reason I have marked this low on the care-o-meter is Lehner was not drafted highly because of his talent level, but primarily because of the team in front of him. Vegas finished with the second-best record and the lowest goals against last season and expectations were similar coming into this season. They also happen to be playing in one of the worst divisions of all time.

However, this season has not gone well for Vegas so far and that primarily has to do with injuries to Mark Stone, Max Pacioretty, and William Karlsson, combined with poor play from Alex Pietrangelo. Stone is due back soon, Pacioretty in about three weeks and Karlsson in about six weeks. I predict Lehner will continue to struggle until at least Stone and Pacioretty are back in action and then he should be just fine. If you have Lehner on your team, hold on to him. If not, this could be an excellent buy-low opportunity.

Also make sure to check out this week’s Fantasy Hockey Waiver Wire article.