Can We Bench Willson Contreras and Buster Posey? 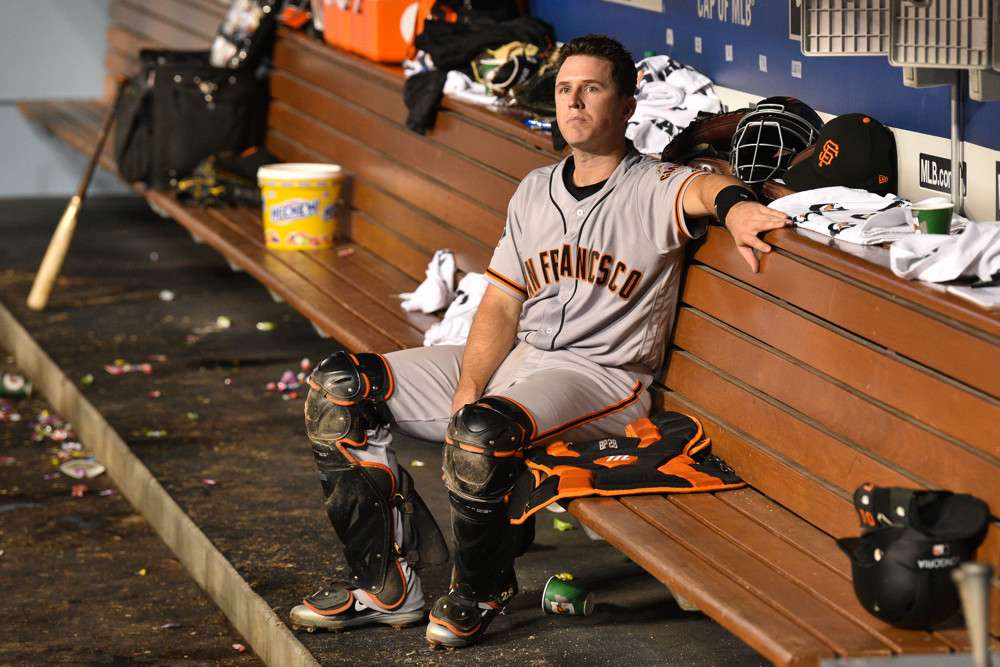 Shortly after he had just completed a particularly brutal month of June, I pondered whether it made sense to bench Salvador Perez. Even though I was discussing this in the context of a 15-team mixed league, it seemed like a drastic thing to consider for a player who was typically the first catcher drafted after the Big Three of Gary Sanchez, Willson Contreras, and Buster Posey.

It turns out that the dilemma that Perez owners faced was a minor nuisance compared to what owners of the Big Three are having to deal with. Now that we have moved into the final quarter of the season, it is getting clearer that fantasy owners are not going to get as much from those presumed elite catchers as they had hoped. By the time Sanchez returns from his DL stint for a groin strain, he won’t have much time to improve on his .188 batting average and .303 wOBA. Contreras and Posey have stayed healthy, but neither is among the top five catchers in Roto value (per ESPN’s Player Rater), much less the top three. Neither is trending in the right direction, as both have fallen outside the top 20 at their position for the last 30 days.

Sanchez’s owners have little to do but wait for his activation, but owners of the other two catchers have a difficult decision to make. As frustrating as Contreras and Posey have been, particularly in recent weeks, the catcher position offers few alternatives. Yet some lesser-owned catchers, like Omar Narvaez, Francisco Arcia, and Mitch Garver, have been more productive than Contreras and Posey over the past month. These hotter hands could fill in for your pricey catcher while you wait for them to start playing like early-rounders.

Before deciding to give Contreras or Posey a timeout, it’s worth taking a look at exactly what has gone wrong.

Expectations for Contreras were high after he surged in the second half of 2017 with a .305/.407/.586 slash line, but he rolled into this year’s All-Star break with a much less impressive .279/.369/.449 line. So far, hopes for a similar second-half renaissance have been dashed, as Contreras has batted .232 with only two home runs and two doubles.

Even though Contreras is undoubtedly having a disappointing season, not everything has gone wrong. Compared to last year, he is swinging at pitches in the strike zone more often and making more frequent contact when swinging at pitches in and out of the zone. For most of the season, Contreras’ issues have stemmed almost entirely from the quality of his contact. His high drive rate — the proportion of balls in play that have exit velocities and launch angles that are most strongly associated with offensive production — is down from 12.2 percent in 2017 to 9.9 percent so far in 2018, according to xStats.org.

More recently, though, Contreras’ progress with making contact has gone into reverse. In the first half, he compiled an 11.4 percent swinging strike rate, but in the second half, that rate has surged to 16.6 percent. As one would expect, Contreras has been striking out far more often since the All-Star break. His first-half 20.8 percent strikeout rate was an upgrade over his prior marks, but his 28.0 percent rate in the second half is almost alarming.

His lack of production doesn’t just result from the opportunities he is missing by not making contact. Contreras’ quality of contact in the second half has deteriorated badly, as he is making hard contact at a 26.8 percent rate and soft contact at a 25.0 percent rate. Those percentages are not far off from those posted by Scott Kingery (25.8 percent hard contact, 22.9 percent soft contact) over the course of this season, and given his puny .261 wOBA, that’s not a good sign.

Because Contreras has shown some encouraging signs, particularly in the first half, it would not be surprising to see him return to the more productive version of himself we saw earlier in the season. He could even approach last season’s second-half heroics, albeit for a shorter period of time. However, if you wanted to give him a brief breather to give one of the widely-available catchers mentioned above a try, or to give an audition to recent callups Taylor Ward or Danny Jansen, there is not much risk in doing it.

Fantasy owners likely did not have the same expectations for Posey as a power source that they had for Contreras, but he was an early-round pick nonetheless. Given his consistently superb contact skills and plate discipline, Posey appeared to be a lock for a batting average around .290 and an on-base percentage of at least .360. While his home run production had been falling for three years running, it was hard to imagine him falling short of the 12 homers he hit last season.

Posey has not let owners down in terms of Avg (.288) or OBP (.363), but he has not hit a home run in two months. At the time of his most recent homer, which he hit off of Dan Straily on June 19, Posey appeared to be meeting a reasonable set of expectations. He had a .289/.362/.430 slash line with five home runs. He was a little light on power even then, but only a little, and he was roughly on pace for 55 RBIs and 70 runs. That’s not far off his pace — both overall and per-game — from last season, though 2017 was down year for Posey in terms of run production.

Those of us who thought Posey would rebound from last season’s downturns in power and run production had to be slightly underwhelmed by his numbers through mid-June. Since then, though, he has been frustrating even to pessimists. Over his last 176 plate appearances (excluding Monday night’s game against the Mets), Posey has stayed steady with Avg (.287) and OBP (.364), but with only seven extra-base hits (all doubles), his run production has ground to a halt. His 15 RBIs and 14 runs over this span would come out to a little less than 50 of each prorated over a full season, if we were to keep his playing time constant.

Some of the blame goes to a Giants offense that ranks 26th in wOBA and 25th in runs per game, but Posey’s utter lack of power is also responsible for his dearth of run production and diminished fantasy value. While Posey has been especially punchless over the past month, his production has lagged in the second half in each of the previous three seasons. The rigors of catching could be taking their toll, and whereas he started 96 games behind the plate and 30 games at first base a year ago, this season he has started 82 games at catcher and only 13 at first base.

Posey has also been taking an extreme all-fields approach in the second half that could be sapping his power. The spray chart on the left is from Posey’s first half and the one on the right is from the second half. He has had a few long flies since returning from the break, but they have been more towards center field. 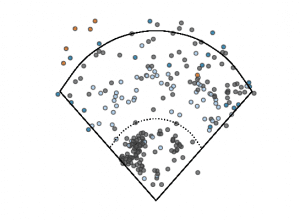 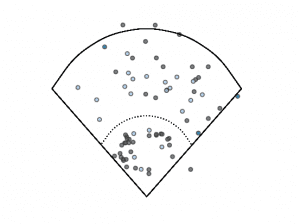 Whether or not you bench Posey will depend in part on your needs, if you play in a categories format. If you need the most help with Avg or OBP, you will have a hard time finding a catcher who is more reliable than Posey in these categories. On the other hand, if you need power or run production, someone like Jansen, Narvaez or Garver might be a better choice, at least in the short run.