Can Project Restart Give Us Clues About the 2020/21 Season? 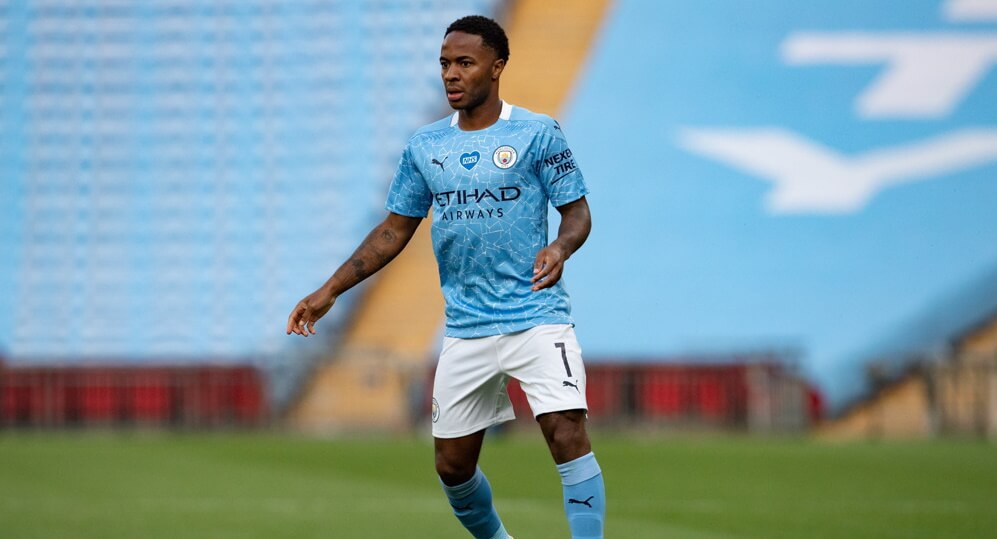 When the Premier League took its COVID-induced hiatus back on March 10th it meant no football – and more importantly, no Fantrax – for exactly 100 days. This is almost certainly a longer break from training and match play than any player would have experienced throughout their career. By comparison, the gap between the final game of the 2018/19 season and the first game of 2019/20 season was 91 days. COVID had essentially split the season into two: a stage one, which consisted of gameweeks 1 to 29*, and a stage two, Project Restart, which consisted of gameweeks 30 to 38.

Seasonal splits in performance, and therefore data, often present interesting narratives. An injury in December may cause a player to slump in the second half of the season; a managerial sacking in January may cause a player to shine down the stretch; and a million other personal circumstances may cause various other fluctuations in form. These, however, tend not to be uniform across all players at the same time, and mean that a mass comparison of statistics would be pointless. The COVID-induced suspension of the league – like the natural off-season that occurs every summer – was a uniform situation though. And as a result, a comparison of performance pre- and post-Project Restart may be able to give us an indication about the direction a player is heading. Or at least as much of an indication that we can usually take when looking at a player’s season-on-season changes.

What Project Restart Tells Us About the Coming Season

This article takes a look at the 20 players who improved their PP90 most from stage one (gameweeks 1 to 29) to stage two (gameweeks 30-38) – termed “Coming Good” – and the 20 players whose PP90 declined the most from stage one to stage two – termed “Fading Away”. Exploring these numbers may give us clues about who will excel and who will underwhelm in the 2020/21 season. 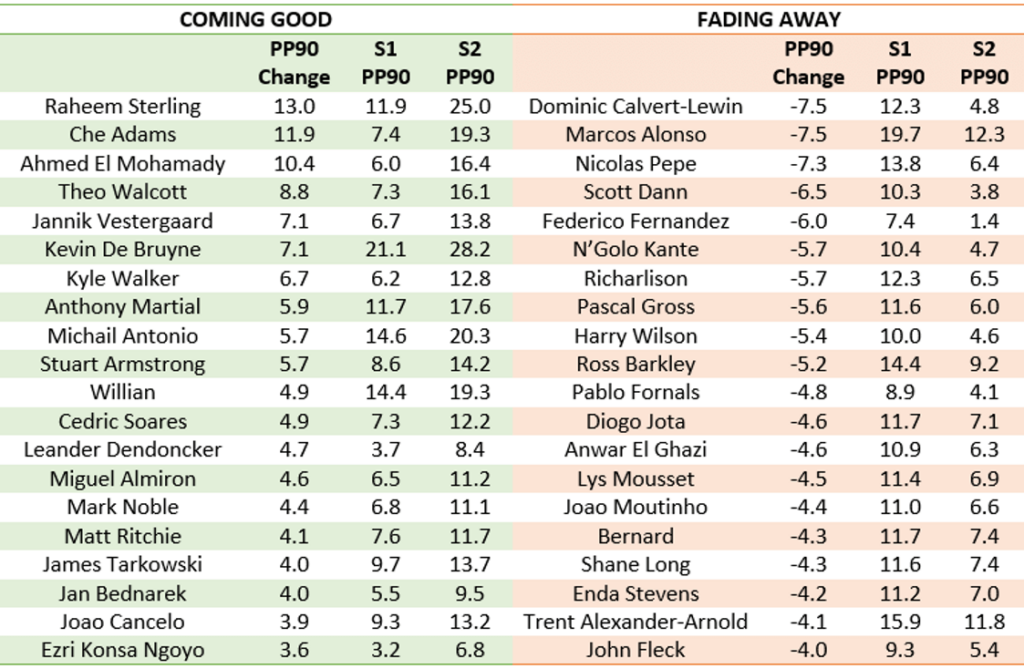 One player from the “Coming Good” top 20 was omitted because they are part of a relegated team as of this writing (Dominic Solanke, #20), whilst seven players from the “Fading Away” top 20 were omitted for the same reason (Teemu Pukki, #4; Adrian Mariappa, #5; Todd Cantwell, #6; Emiliano Buendia, #12; Ismaila Sarr, #15; Adam Masina, #16; Christian Kabasele, #17). Only players who had played a minimum of 200 league minutes at all three stages were included in the analysis.

Analyzing the Above in 30 words or Less…

Che Adams: You know the saying: you wait ages for a bus to arrive… But could this be a sign of a regular service at Southampton?

Ahmed El Mohamady: He won’t be the first choice RB at Villa next season so don’t worry about his good end to this one.

Theo Walcott: Might be more a sign of the desperate times at Everton towards the end of this season…still, the youngster is showing a lot of potential.

Jannik Vestergaard: A monster in the air, this guy is a viable streaming option against long-ball teams next season (Fantrax scoring, of course).

Kevin De Bruyne: He can’t actually be getting better, surely? Is that even possible?!? Looks like first pick of the draft just got even more important.

Kyle Walker: Ending with a clean sheet and assist in games against Norwich and Watford have been SUPER flattering…this is still not the Spurs version of Walker.

Michail Antonio: Injuries have hurt Antonio’s FP/G in the past, but his PP90 has always been good. If he’s fit, he’s a solid round 2 draft pick…maybe higher.

Stuart Armstrong: 35th highest scoring outfielder post-restart, but also 28th highest in the calendar year. The last 8 games were not a fluke.

Willian: Willian has fought off better competition than Pepe for a starting spot in the past. He’ll do so again and continue to be a valuable fantasy asset.

Cedric Soares: 17 points in 13 substitute appearance minutes against Norwich have badly manipulated the PP90. At best, he’ll be sharing game-time with Bellerin. Not draft worthy.

Leander Dendoncker: May have seen a big increase but the stage one was incredibly low. A midfielder that covers in defence is the opposite of a fantasy manager wish-list.

Miguel Almiron: Not quite reached the highs of doppelganger Santiago Munez, but perhaps 2020-21 is the real climax to the movie. Some promising signs, but don’t get too carried away.

Mark Noble: Had Guardiola converted his defensive midfielder into a number 10 at age 33, we’d be reveling in his genius. Alas, Moyes may only receive the plaudits of fantasy managers.

Matt Ritchie: Earlier in the season the midfielder had been playing at left-back but Rose’s arrival pushed him back up field. Monitor this before drafting him.

Jan Bednarek: Southampton could/should be the “under-the-radar” team for next season. Fantasy assets will be ripe, but there are better ones than Bednarek.

Joao Cancelo: Guardiola gave him a lot of love post-restart, but it’s still not convincing enough to warrant a draft pick just yet. He’ll be a great 2pm player though*.

*A 2pm player is a player that should almost always remain on the free agent list because they are too often on the bench. When you do see them start though – i.e. when the lineups are announced at 2pm on a Saturday – they are a must grab. Also see Callum Hudson-Odoi, Erik Lamela, Christian Benteke, Alex Oxlade-Chamberlain, etc.

The Players Fading Away

Marcos Alonso: Nobody contradicts fantasy value and real world ability quite like Alonso (or maybe Mustafi). Lampard clearly wants a better left back, but until one steps up, he’ll remain valuable.

Nicolas Pepe: Worrying times for Arsenal’s record signing. Arteta clearly doesn’t rate him. If Auba goes (looking unlikely), maybe he steps up – and warrants a 3rd round pick – if not…6th round??

Scott Dann: Dann started 7 games pre-COVID and had 5 clean sheets – this was never sustainable. Unless 2020/21 brings another Norwich-strategy**, the Palace defender should always remain on the free-agent list.

Federico Fernandez: The 5-0 loss to City in which he scored an own-goal doesn’t help the post-restart PP90, but it’s probably a closer projection of 2020/21 than the pre-COVID, high-flying Newcastle.

N’Golo Kante: Three goals pre-Christmas but returned to his more defensive role at the back-end of the season. With Jorginho likely to leave, Kante’s brief days venturing forward may be over.

Richarlison: Richarlison couldn’t keep carrying the team all season. Needs Everton to bring in a top-tier midfielder to go from a 4th round pick to a 3rd rounder.

Pascal Gross: Gross looks to be getting phased out by Potter, and his fantasy returns reflect that. Lallana’s arrival further diminishes his prospects to the point of being undraftable.

Harry Wilson: Post-restart Wilson was confined to 7 sub appearances and exceeded 2 points just once. If he finds a place to start (Leeds??), he may be worth a throw-away draft pick.

Ross Barkley: Mr All-or-Nothing. When Barkley scores big, it tends to be very big. Everything else is generally poor. That kind of unpredictability is not helpful in Fantrax (unless Autosubbing…).

Pablo Fornals: To produce so little in a rejuvenated West Ham team whilst starting every game post-restart is actually pretty impressive. The Hammers seem set on finding an upgrade.

Diogo Jota: Benched for the big Olympiakos game could be a sign of things to come. 3rd to 5th rounder last year…anything in the first 10 would be a risk this year.

Anwar El Ghazi: Didn’t start the final four games (where Villa went unbeaten) and had been declining throughout 2020. If Villa sign a winger, he could be on the way out.

Lys Mousset: The 6-game stretch from October 21st was the only thing Mousset did all season, and his PP90 decline here reflects that. Not draft worthy.

Joao Moutinho: Tempting to suggest that Father Time is catching up with Wolves’ midfield genius…it may be the case, but if he falls to the 5th/6th round, it’s a safe pick.

Bernard: Richarlison, Sigurdsson, Baines, Iwobi, and Gordon were all used by Ancelotti at left-midfield post-restart. Would need a helluva pre-season to warrant being drafted.

Shane Long: A very workable PP90 in stage one helped Long become a surprisingly decent option in deep leagues, but Adams’ rise may bring an end to this.

Enda Stevens: The eye-test was not kind on Stevens post-restart, and the PP90 mirrored this. The blades have been found out, and the value of many players will reflect that this season.

Trent Alexander-Arnold: TAA’s “poor” restart meant he dropped from 8th to 12th on the PP90 ladder. He’ll still be the first defender off the board, and should be in the 1st round.

John Fleck: The injury led to missed games post-restart but probably affected the ones he did play too. Will remain a decent option with a high floor. 10th round?

**The Norwich strategy is when you bring in a defender because they are facing a team whose likelihood of scoring is on par with Roy Keane’s chances of cracking a smile on TV. Relying on clean sheets can be risky, but not so in this case.

So there you have it. The PP90 numbers (generally better to use than FP/G or even total points) have hopefully identified some players that may excel or underwhelm when the 2020/21 season kicks off in just over a month’s time. A forward line of Sterling, Martial, and Adams could fire you to a title challenge, whilst reaching in the draft for the likes of Richarlison, Pepe, and Jota could leave you battling to avoid the wooden spoon. Not long to wait now!