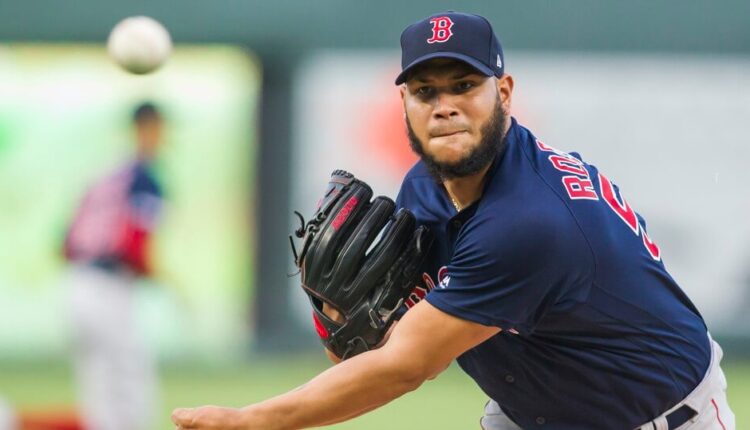 Over the past few weeks, I have been focusing on the positive side of things. Using my newly created Stuff and Command metrics, I have identified a number of pitchers who can return buckets of fantasy goodness for their owners. Predicting breakouts is the fun part of this job but predicting the pitching busts is ever more important.

As a result, I want to take a look at five pitchers that Stuff and Command do not like. The interesting part of this article is that it highlighted a number of pitchers I actually loved coming into this, including one I just drafted over the weekend. This is by no means a hard and fast rule and most pitchers can break the mold but it is important to give these names a second look. These five potential pitching busts show both below-average Stuff and below-average Command based on my numbers.

Seeing Eduardo Rodriguez on here really hurts. The Red Sox left-hander has been one of my favorite mid-round draft targets thus far. His second half was incredible and I wonder if the poor start is dragging down the overall numbers. He is a prime example of the type of pitcher I want to evaluate using some form of rolling data.

Overall, the knock-on Erod has been health and control. However, he has shown true flashes of greatness. The data though does not paint a picture of true greatness. While I still believe that there is talent there I will be limiting my exposure to him as it appears he has real potential to bust. As with many of the other names on this list, his price tag is not insanely high but drafting him with the hope of a rise to the upper tiers of fantasy relevance appears to be foolish.

Another breakout favorite of mine and many others in the community is Anthony DeSclafani. DeSclafani had a very positive 2019 overall. After being a yearly breakout favorite he finally posted a healthy-ish season with over 160 innings pitched. He struck out a batter per inning and did a good job limiting walks once again. This was somewhat countered by poor HR numbers as he, much like the rest of the league, was beat up by the long ball. Overall, he beat his FIP by about half a run. The total package was good for a sub-4.00 ERA.

Projection models see regression hitting hard and the FIP beating skills not repeating in 2020. However, many fantasy owners see some upside in the Reds’ righty. Prior to today, I considered myself one of those aboard the Tony Disco hype train, but I think while he continues to call that ballpark home, he is going to struggle to post elite results. At the back end of a draft, he is a fine gamble but I think there are better pitchers with better indicators going at the same time. I am going to invest more in those guys than I will be in DeSclafani going forward.

Further down the list is another pitcher I really liked going into this exercise. Marquez was an extremely popular breakout favorite last season as many thought he had figured out Coors. It turns out he, like so many before him, was not a Coors beater. In the end, the ERA approached 5.00 and he left fantasy owners in a bad way.

I have been buying Marquez heavily, including on my TGFBI team. He can easily approach 200 strikeouts and if used in matchups correctly can be an asset in terms of both ERA and WHIP. However, Stuff and Command are not a fan at all. 2019 was actually his best Command ranking in the years he’s qualified and he did post a career-low walk rate. The stuff appears to be elite when watching him so maybe there is some impact due to Coors that I am missing. This may require a deeper dive into the data. Overall, despite the poor numbers, I will still be buying Marquez. However, similarly to E-Rod, I will not be buying at the same rate I have been.

Caleb Smith has seen each of the last two seasons play out the same way. A dominant ace-like beginning of the season impacted by injuries. After returning from an injury last season, Smith was brutal, pitching to an ERA over 5.00. Many people including myself (I’m sensing a trend) have been chasing that first half result. The idea behind it is that Smith has flashes of true fantasy ace production and if he can turn that in across a full season, he could be a bargain. The Stuff and Command numbers both see him as below average but only barely so. He just barely missed the average result in both 2018 and 2019 and this leads me to believe that his injury-impacted second halves could be a reason for this. I will still be buying in or Smith and think he has the best chance of truly making a jump if he can stay healthy. However, I will be slightly lowering my expectations and will not be jumping a round-plus over ADP to get him.

While Turnbull does not quite fit with the previous three names I still wanted to mention him. I have seen him touted by many as a late-round dart throw due to his strikeout numbers from last season. However, I was disappointed to see his name appear on my below-average list. Watching him pitch, I expected him to grade out as a poor Command, good Stuff type of pitcher. There are a number of success stories among this tier of pitchers, several of whom I identified in a piece a few weeks back. Turnbull is pretty much free in drafts so taking a chance on him is not going to ruin a season but I have realized that there are a number of other pitchers I like that are being drafted around him.

Typically, I like to focus on breakout types of pieces as they are much more fun to write. However, identifying potential pitching busts was a truly eye-opening experience as many of my favorite mid-round draft targets showed up as pitchers to be wary of. This is just one piece of analysis and obviously there are other reasons to like these guys but this will give me some hesitation in pulling the trigger on them in drafts. These were not the only pitchers who met both criteria but there were some of the bigger names to make the list. While there is still good reason to draft these five pitchers, Buyer Beware if expecting a breakout.

Who are the pitching busts you are staying away from in drafts? Help a fellow owner out and share the names in the comments below.