Outside of Byron Buxton, the Twins have several intriguing outfielders in Max Kepler, Trevor Larnach, and Alex Kirilloff. The latter two posted compelling numbers in their short sample in 2021, and we’ll decide whether to buy or sell these Twins outfielders. Like Kyle Hendricks, Kepler landed on several of my rosters. Should we have concerns about Kepler’s power dip? Do we draft or avoid Larnach and Kirilloff at their ADP? Let’s dive in and answer those questions and more in the next installment of our fantasy baseball buy or sell series.

A couple of weeks ago, I noted that Kyle Hendricks ended up as one of my most rostered players. Another highly rostered player for me included Max Kepler. Granted, he fares a tad better in OBP leagues with a career 10.2% walk rate and .317 OBP. However, from 2018 to 2019, he averaged 25 home runs with just under four stolen bases (3.7). Kepler displayed solid plate discipline with a below-average batting average.

In 2021, Kepler finished with a career-high in stolen bases (10) and 19 home runs in 490 plate appearances. We typically see Kepler racking up counting stats based on volume since he averaged 591.7 plate appearances from 2017-2019. Unfortunately, Kepler dealt with a hamstring injury and tested positive for COVID-19. It’s still hard to understand how much COVID-19 impacts players, but it seems to affect each person differently.

Initially, Max Kepler landed as a buy more than sell, meaning I expected him to bounce back in 2022. However, the Baseball Savant data on Kepler looked concerning outside of the career-best barrel rate. On a positive note, we have reasons for optimism with Kepler’s 2021 plate discipline looking like an outlier compared to 2017-2019. Although we can’t rely on Kepler’s 10 stolen bases, he ended up with a 100% success rate in 2021. 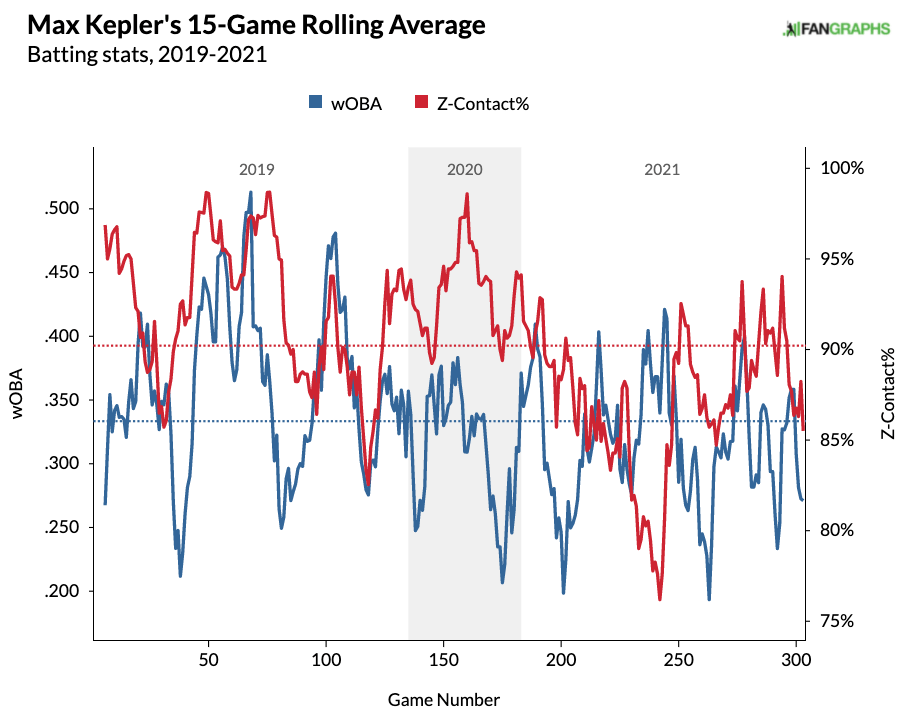 With the Twins trading away high-end players around the trade deadline in Nelson Cruz and José Berríos, they’re retooling, and Kepler should garner everyday playing time. One area to monitor for Kepler involves the batting order because, in previous seasons, he batted leadoff. However, in 2021, Kepler batted more in the middle of the lineup, which could mean more RBI opportunities.

The early Draft Champions NFBC ADP of 294 for Kepler might lean more to buy than sell the Twins outfielder given the ADP close to pick 300. That’s almost double the ADP for the next Twins outfielder we’ll break down in Alex Kirilloff.

During Kirilloff’s shortened rookie season, he posted eight home runs, 23 runs, 34 RBIs, and one stolen base in 231 plate appearances. Kirilloff smashed four of the eight home runs in a three-game stretch, but we witnessed the upside in 2021. The raw power hasn’t been the concern for Kirilloff, even though it didn’t show up with 16 home runs combined in 2018 and 2019 at High-A and Double-A.

Unlike Max Kepler, Alex Kirilloff used an uber-aggressive approach with a 40.7% O-Swing% yet an 83.1% Z-Contact% and 75.3% Contact% near the league average. Interestingly, Kirilloff hit a ton of ground balls with a 48.8% ground ball rate and a 29.3% flyball rate in 2021. Sometimes we see young players hit many ground balls early on, like Juan Soto or Vladimir Guerrero Jr. That aligns with Kirilloff’s minor league career, where he rocked a groundball rate above 40% throughout most of his pro career. 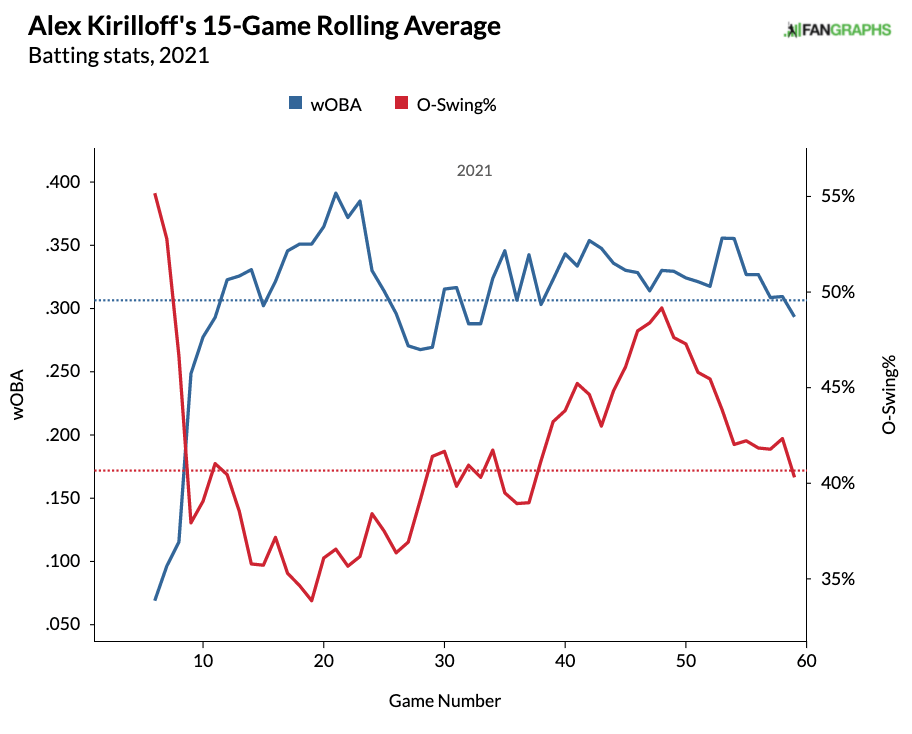 When we see a high ground ball rate for a power hitter, we need a high exit velocity on line drives and flyballs. Granted, it’s a small sample, but Kirilloff boasted a 96.2 mph exit velocity on FB/LD that ranked 40th with a minimum of 150 batted ball events near Patrick Wisdom, Hunter Renfroe, and Christian Yelich. That’s a positive sign to latch onto buying rather than selling for 2022. Kirilloff’s maximum exit velocity at 108.4 mph (56th-percentile) finished mediocre, but we like the 12.8% barrel rate. However, again, it’s a small sample.

Given the plus hit tool for Kirilloff, it’s safe to speculate on better plate discipline for him in 2022 and beyond. Due to the NFBC ADP inside the top 200, it suggests we should sell instead of buy into Kirilloff for 2022 redraft leagues. However, Kirilloff displayed the power upside in 2021 when healthy.

Honestly, it seems that we have a deep sleeper in Trevor Larnach with an early Draft Champions NFBC ADP just inside the top-500 at pick 485. Larnach held a similar outlook to Alex Kirilloff with an above-average hit tool, with plus-graded raw power. In 2021, Larnach finished with seven home runs, 29 runs, 28 RBI, and one stolen base. The 10.3% walk rate may look positive. However, the 34.6% strikeout rate worries us. When looking at Larnach’s minor league career, maybe the strikeout rate shouldn’t concern us since he possessed a higher strikeout rate than Kirilloff.

Unlike Alex Kirilloff, Trevor Larnach showed patience similar to Max Kepler with a 27.8% O-Swing% yet below-average zone and overall contact rates. Larnach finished his 2021 rookie season with a 77.7% Z-Contact% and 62.9% overall Contact%, including a concerning 16.3% swinging-strike rate. 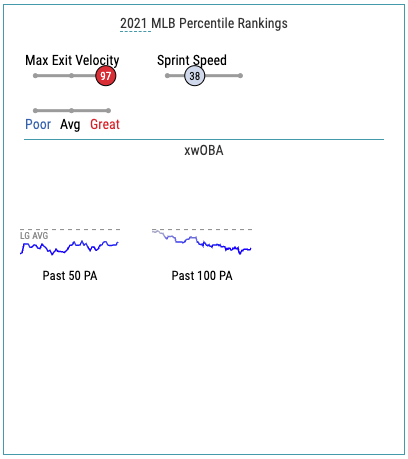 On a positive note, Larnach rocked an elite 116 mph maximum exit velocity in the 97th-percentile. Larnach’s 9.5% barrel rate looked solid. However, it’s overall a limited sample of 158 batted ball events. Like Kirilloff, Larnach hit a ton of ground balls with a 46.2% groundball rate, yet Larnach pulled the ball a decent amount with a 43% Pull%. Overall, it appears that Larnach uses a patient approach with a ton of raw power. That said, we’ll note that Larnach’s 93.6 mph exit velocity on FB/LD ranked No. 137 with a minimum of 150 batted ball events near Alec Bohm, Niko Goodrum, and Austin Nola.

Towards the end of the 2021 season, Trevor Larnach landed on the injured list with a hand injury. However, in mid-August, the Twins sent Larnach down to Triple-A when they called up Nick Gordon. With knowing that, early Roster Resource projects Larnach in Triple-A with Byron Buxton healthy plus Max Kepler and Alex Kirilloff.

In a draft and hold type format, it’s worth snagging Larnach late in drafts inside the top-500 picks since there’s a chance Buxton doesn’t remain healthy in 2022. Early STEAMER projections have Larnach with ten home runs, 37 runs, 37 RBI, and one stolen base in 327 plate appearances. That’s similar to Larnach’s 2021 in counting stats and playing. Unfortunately, Larnach’s projected batting average of .235 and .316 OBP aren’t conducive to traditional rotisserie or on-base leagues. Regardless, Larnach’s raw power and extremely late ADP mean we should buy rather than sell for 2022.