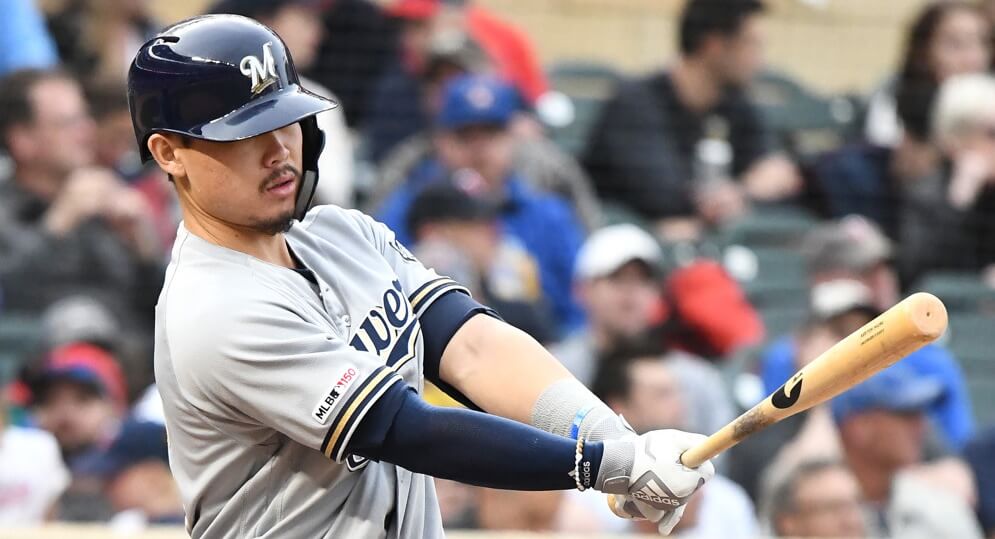 If you missed the first Buy or Sell piece, then check that out here. We discussed several young hitters off to hot starts. With such a small pitching sample, I decided to wait until Week 3 to include pitchers onto the buy or sell agenda. It’s still a small sample for pitchers, but we’ll discuss whether we should buy or sell these players. Throughout the season, this might turn into mini deep dives on some players as we uncover some of the underlying metrics and what to make of it all. That said, let’s dive into Week 3 players to buy or sell.

Hopefully, I’m back in the good favor of Mr. SP Streamer Michael Simione after his disappointment in my lack of inclusion of pitchers.

All kidding aside, Trevor Williams pitched well against the Brewers in his first start of the 2021 season. Williams recorded a quality start as he allowed two hits, two earned runs, and two walks with six strikeouts in six innings pitched. He mixed in up to five pitches (four-seam, sinker, changeup, curve, slider) with usage ranging from 13% to 29%. Williams recorded a 41% whiff rate and 39% called strike plus whiff rate (CSW%), not bad as a two-start streamer.

Look at where Trevor Williams located his pitches against the Brewers. We see four-seam fastballs up in the zone, changeups down in the zone, and sliders away from right-handed hitters. It’s something to monitor in his upcoming starts whether it’s intentional or not. Keep in mind that early in the season, the Brewers hitters rank second to last with a .280 wOBA. Regardless, it’s a solid start for Williams and he’s worth streaming as a backend starter on fantasy squads.

Unfortunately, here’s the nature of a two-start streamer like Trevor Williams. In his second start against his former team in the Pirates, Williams allowed ten hits, five earned runs, and two walks with three strikeouts in 3.1 innings pitched. He only recorded a 16% whiff rate and 28% CSW% through 75 pitches against the Pirates who have a .316 team wOBA (N0. 9). His first start intrigued me, but the Brewers have struggled offensively as a team. Overall, he’s primarily a streamer in 15-team leagues or deeper. Buy or sell Trevor Williams? I’m leaning more sell than buy, but he’s one to monitor.

In Nick Pivetta’s first start of the season, he went five scoreless innings with four strikeouts while allowing two hits and four walks. Pivetta primarily used his four-seamer (46%) and slider (41%), each over 40% of the time, which is a welcomed sight. For reference, Pivetta used his slider at 20% in 2020 and 12.4% in 2019. Using the best pitch in his slider more often looks like a positive trend and outcome. Overall, Pivetta finished with a 27% whiff rate, but a 37% whiff rate on the slider. Meanwhile, he totaled a 39% CSW% with his slider yet only a 27% CSW% overall.

A few things I'm monitoring for Nick Pivetta from 2020 – vertical & horizontal release point. Looking to see if that translates to pitch movement. #FantasyBaseball@TateSchlichting and I can't wait for it 😉🙃https://t.co/z7OUrUYuRz pic.twitter.com/ak1Hn1bx01

Last season, Nick Pivetta adjusted his vertical and horizontal release point and it translated into some vertical and horizontal movement on his pitches. It’s something to monitor as the season goes on via Brooks Baseball. Not saying to rocket Pivetta up the ranks, but rather don’t sleep on him with a new team and potentially positive changes. Although Pivetta struggled a bit with his command and control, I’m still optimistic. Do I buy or sell Pivetta so far? I’m buying in as a deep-league streamer and someone to monitor in shallower formats.

Against the Orioles in his second start, Pivetta allowed four earned runs, seven hits, and three walks with seven punchouts in six innings. He relied on his four-seamer quite a bit at 56% in this game and lowered the slider usage to 26%. It’s difficult to tell whether it was a part of the game plan or Pivetta didn’t have the feel for his slider that day. In 15-team leagues, pick up Pivetta or hold onto him if you nabbed him for his recent two-start week. Although he continued to struggle with command and control, we have some positive signs here.

In Nick Pivetta's first start, he used his slider over 41% of the time. Then in today's start, he threw it 26% of the time. Would like to see him rely more on the breaking pitches though he still struggled with command and control. #FantasyBaseball pic.twitter.com/rHuhJNfjoz

In a matchup against the Mets facing Jacob deGrom, Trevor Rogers held his own with six scoreless innings on Saturday. Rogers allowed three hits and two walks with ten strikeouts. With his primary three-pitch arsenal (four-seam, slider, changeup), Rogers finished with a 46% whiff rate and 41% CSW%. He elicited a whiff rate over 40% on his four-seamer, slider, and changeup. Straight filth. Against one of the tougher offenses, Rogers pitched well and we loved seeing it. Rogers threw his slider down and away to lefties and the changeup with some arm-side tumble away from righties.

I landed Rogers on several teams, including my TGFBI team, so I already bought into him as a late-round sleeper. That said, you have my answer on whether to buy or sell on Trevor Rogers in shallower 10-12 team leagues. Rogers boasts average to above-average command that will keep him relevant with his filthy arsenal. He’s close to, if not already, must-start status.

To say Keston Hiura is struggling so far is an understatement. In 39 plate appearances, Hiura has a .114 batting average with one home run and one steal. We expected power and speed from Hiura, and hopefully, he turns it around in 2021. To see him struggling so much seems unexpected because of his strong hit tool. With the signing of Kolten Wong, Hiura moved over to play first base.

#Brewers first baseman Keston Hiura took a knee to the thigh from Minnesota's Mitch Garver yesterday in that collision at the bag. Said he's bruised and a little sore. I told him us old-timers call that a charley horse and he agreed with my medical assessment.

One quick note on a speculative reason for Hiura’s struggles so far – he suffered a thigh bruise while covering first earlier in the season. Twins catcher Mitch Garver ran into him and thus, it resulted in a bruised thigh for Hiura though not seriously injured. Adam McCalvy of MLB.com noted that in an article on April 5th. It’s safe to imagine that the thigh injury impacted him.

However, Hiura noted he’s shaking off his struggles and attempting to move onto the next at-bat 0r play. Hiura knows this is a natural part of being a baseball player and athlete, I expect him to turn it around. Therefore, should we buy or sell in Hiura? I’m buying and attempting to acquire via trade where I can.

There’s no denying Hiura’s dreadful start shows up in the plate discipline metrics with a 37% O-Swing%, 61.7% Z-Contact%, and 59.7% Contact%. The table below shows us the drastic differences, not in a good way, when comparing 2019, 2020, and 2021. However, one small note – his plate discipline has slightly improved over the past week with a lower O-Swing% and slight increase in his contact rates.

Joe Drake over at Prospects Live wrote up a wonderful deep dive on Hiura. Joe noted Hiura’s struggles with his timing though Hiura boasts a strong hit tool and elite bat speed.

On Saturday, Keston Hiura launched his first home run of 2021 to deep centerfield. In this same game against the Cardinals, Hiura blasted four hard-hit balls all with an exit velocity of over 100 mph. It’s time to buy back into Hiura before it’s too late.

Part of this process when developing the buy or sell article involves looking into players with hot/cold starts while also seeing how they align with our player targets or fades. In Jared Walsh’s case, I considered fading him with his home run hot streak in 2020. Through 17 plate appearances in 2020, Walsh hit .118 with zero home runs. During this span, Walsh had 41.9% O-Swing%, 70% Z-Contact%, and 75.8% Contact%.

In an article on FanGraphs, Jake Mailhot mentioned that Jared Walsh adjusted his swing in an attempt to make more contact. It looks like it took a bit of time for it to translate into production last season, but it paid off. The table below shows the year-over-year improvements. Kudos to Eddy Almaguer of Prospects Live for commenting on an article of mine about Walsh’s changes in contact and all fields approach. It brought to light something I hadn’t uncovered yet.

Through 43 plate appearances in 2021, Walsh keeps crushing with three home runs, eight runs, and ten RBI with a .324 batting average. Walsh boasts a 14.8% barrel rate and 110.1 mph maximum exit velocity. Before the season, I would’ve said sell to whether we should buy or sell with Walsh. However, the data backs up the changes and I’m buying into Walsh for 2021.