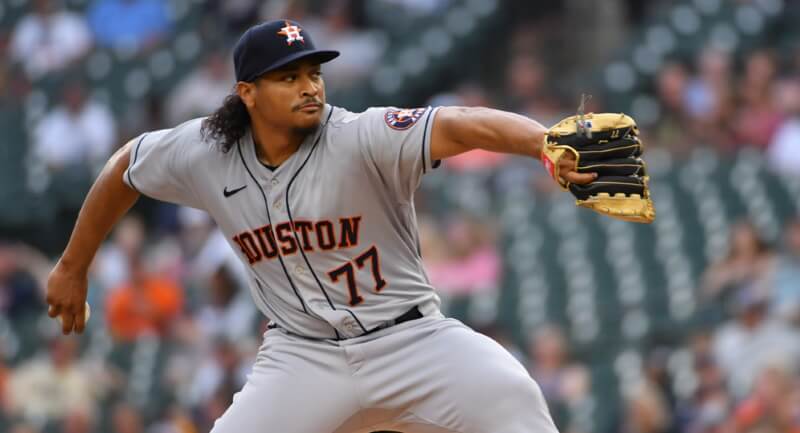 In the past few years, targeting Astros pitchers appears to have been a good strategy. That said, it leads us to analyze whether to buy or sell a couple of Astros pitchers for 2022. Framber Valdez came off a solid 2020 season, injured his finger, then finished the year strong after a potential scare that the injury would end his season. Luis Garcia stepped up, and Cristian Javier flashed as a starter and reliever.

After missing the entire 2021 season with Tommy John surgery, Justin Verlander re-signed with the Astros for a one-year deal worth $25 million. Assuming health, Verlander should serve as the Astros ace. We’ll see where Zack Greinke lands, but we’ll likely want to buy more than sell the Astros pitching staff.

For the sake of this article, we’ll discuss Astros pitchers towards the back end of their rotation. I won’t dare call these pitchers “fringe” since that triggered a couple of folks when I discussed the “fringe” Brewers pitchers, plus we have more confidence in these Astros pitchers. Let’s dive into whether we should buy or sell Luis Garcia and José Urquidy. We may discuss Cristian Javier in a future article.

One caveat with the Astros pitchers involves the loss of their pitching coach in Brent Strom. In an MLB.com article by Brian McTaggart, Strom noted Josh Miller and Bill Murphy are well equipped. It doesn’t mean the Astros pitching staff will fall apart, but it’s a notable narrative for 2022 and beyond. 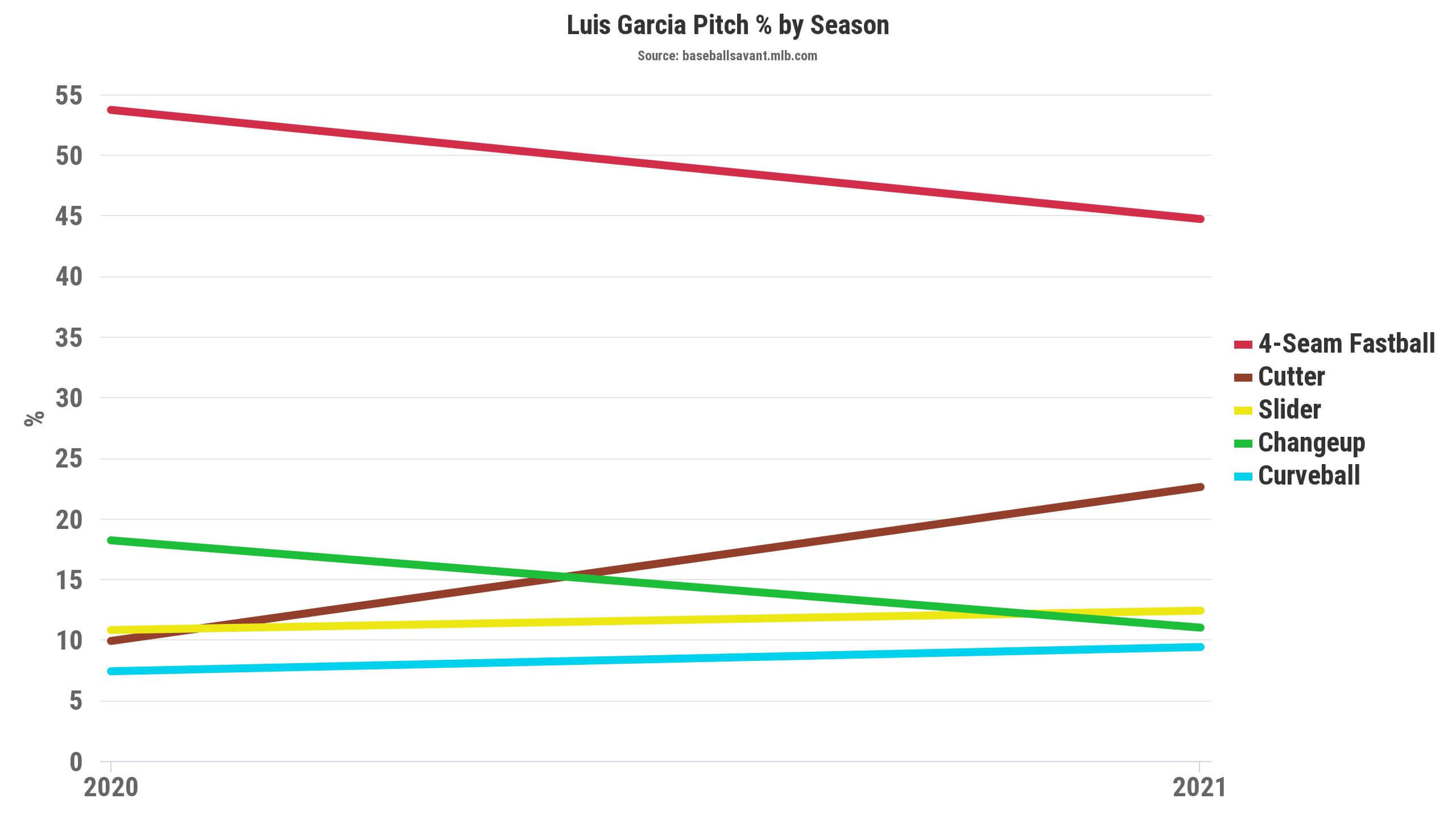 Interestingly, Garcia swapped the cutter and changeup usage in terms of percentage. However, Garcia still used the changeup as a weapon against lefties. Of his 276 total changeups, 268 were thrown against left-handed hitters. The changeup performed decently with a .277 wOBA allowed, 17.8% swinging-strike rate, and 39.1% whiff rate. We’ll note that it’s hard to compare to the 2020 season due to the small sample of 12 1/3 innings pitched in the shortened season. 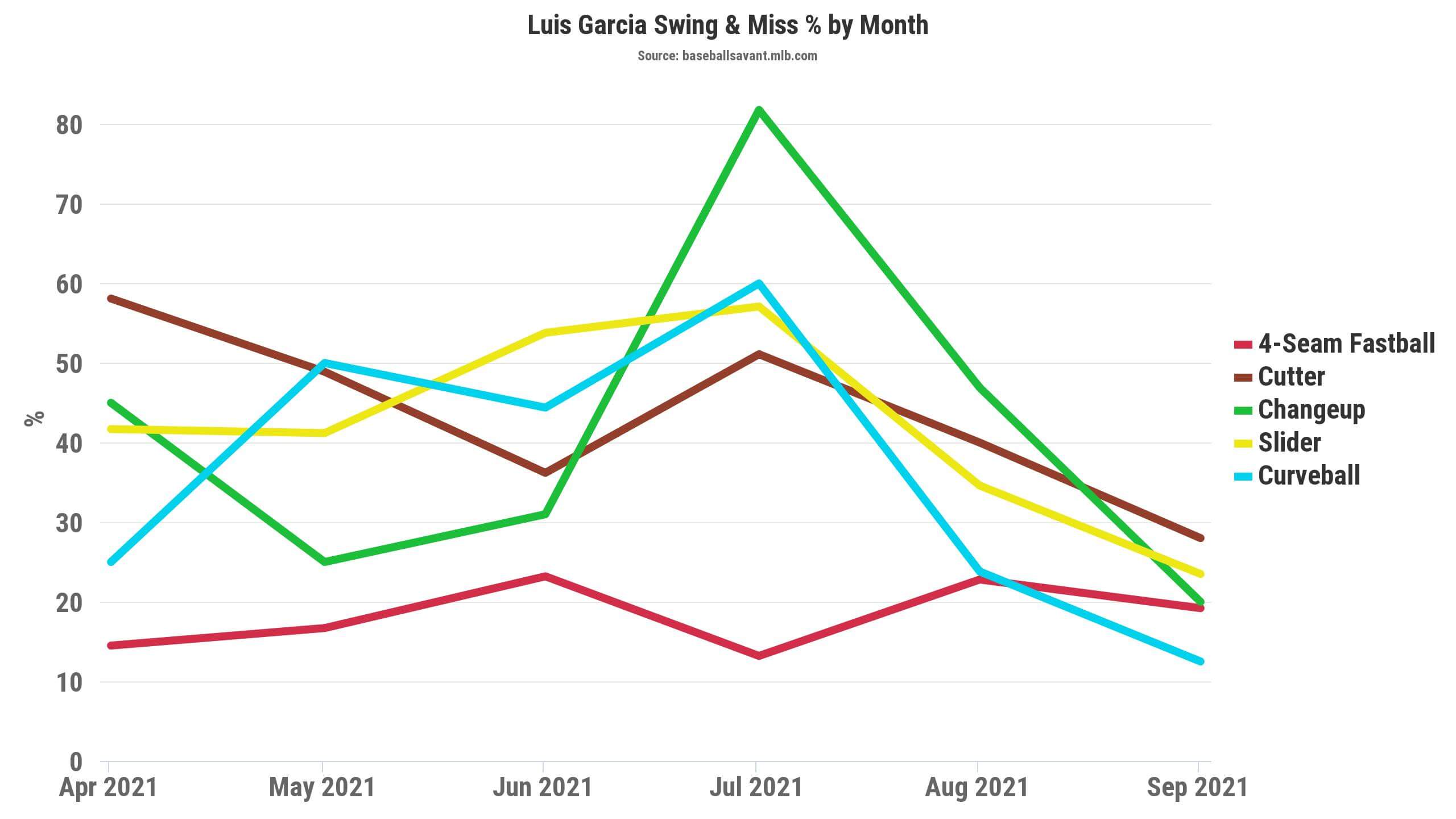 Should We Buy or Sell Garcia?

With four pitches eliciting a double-digit swinging-strike rate plus the team context, it leads us to buy rather than sell Luis Garcia’s 2021 season. The early Draft Champions leagues give Garcia an NFBC ADP right around the top-150 picks at 152. That’s a fair draft value near teammate Framber Valdez, Zac Gallen, and Sonny Gray.

We expect the ERA to regress slightly due to the LOB%. However, the early STEAMER projections provide a median outcome of 4.29 ERA, 1.30 WHIP, 24.5% strikeout rate, and 8.8% walk rate. Garcia’s stuff plus apparent command and control gives us optimism heading into 2022. The Statcast Swing Take image shows us that Garcia thrives in the heart and shadow areas of the zone.

We have this fun chunk of Astros pitchers around the 150 NFBC ADP range in Framber Valdez, Justin Verlander, Luis Garcia, and José Urquidy within 30 picks. Unfortunately for José Urquidy, he dealt with injuries, particularly shoulder issues. That said, Urquidy finished 2021 with a 3.62 ERA, 0.99 WHIP, 21.3% strikeout rate, and 4.5% walk rate. Once a dynasty sleeper, he’s now a fantasy-relevant redraft option, but we’re dealing with a small sample of 177 2/3 innings pitched across three seasons.

José Urquidy is a changeup-first guy that added two above-average breaking balls in the minor leagues, very much like Luis Garcia. The Astros pitching development is top shelf. pic.twitter.com/BKCwmYnoSe

We love the low walk rates with a career of 4.8% and a 1.02 WHIP. The WHIP stands out because that’s an underrated category in rotisserie leagues. We’ll focus on 2021 and include previous seasons, but most of Urquidy’s sample occurred last year. Urquidy’s .237 BABIP and 77.2% LOB% may look a bit unsustainable. However, in 70 2/3 innings pitched (2019-2020), Urquidy boasted a .250 BABIP and 79% LOB%. Overall, we’re dealing with small samples, but it’s possibly a skill for Urquidy to limit the BABIP.

José Urquidy controls the strike zone and also commands his pitches well. That’s evident in Urquidy’s Swing Take profile since he thrived in the shadow area.

Urquidy doesn’t rely on the premium velocity with a four-seamer that sat at 92.5 mph. However, Urquidy uses his breaking and offspeed pitches well. He pounds the four-seamer with a 66.4% Zone% that he uses just under 55% of the time (54.9%).

Should We Buy or Sell Urquidy?

José Urquidy is the 4th @astros pitcher to have 7+ Ks and 0 BB in a #WorldSeries game (Verlander, Morton, Backe). pic.twitter.com/vKIa2CPA7J

Early STEAMER projections have Urquidy with a 4.63 ERA, 1.27 WHIP, 20.8% strikeout rate, and 6% walk rate in 145 innings pitched. In Urquidy’s previous 177 2/3 innings, he never reached an ERA and WHIP that high. It appears STEAMER expects the BABIP to regress to .287 and LOB% drops to 71.6%. There’s a chance Urquidy regresses in 2022, but I’m optimistic with both Urquidy and Luis Garcia.