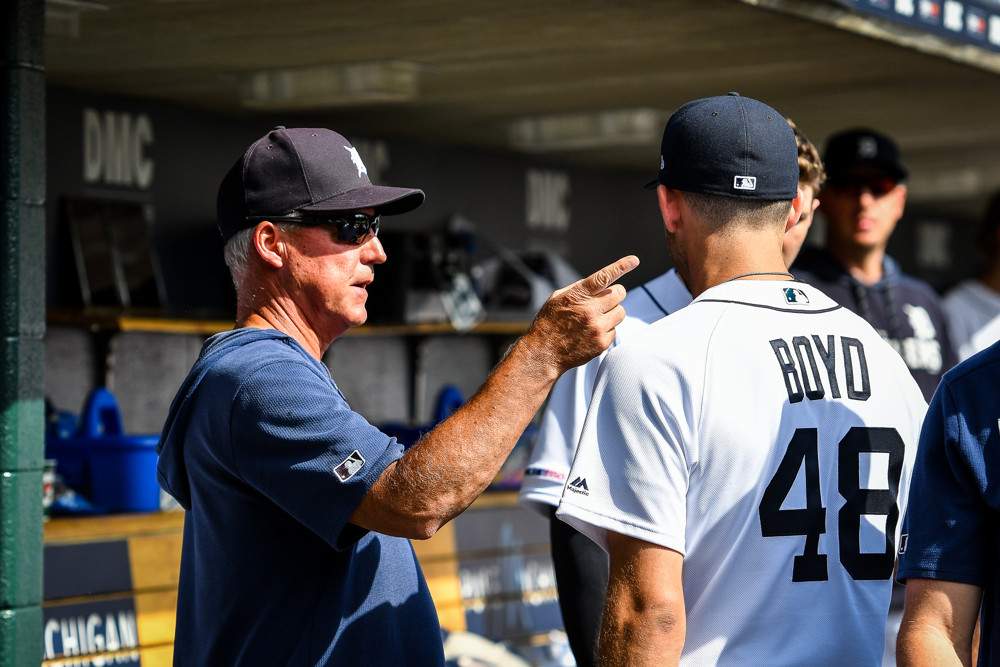 Last week, we dug into several intriguing players in Trevor Rogers, Nick Pivetta, Keston Hiura, and Jared Walsh for the second installment of the buy or sell article. With more and more data to analyze, we’ll consider whether we should buy or sell these early samples.

Usually, the research starts with various leaderboards and hot/cold players on fantasy squads, then it turns into a deeper look at what’s going on. For instance, with Alex Cobb, we found some mind-blowing career bests in his splitter usage and swing/miss rates. Is Jazz Chisholm legitimate? Should we buy back into Matthew Boyd? We plan to answer those questions and more in this week’s buy or sell.

Typically when we have a pitcher moving to the Pirates, we have concerns. However, when pitchers leave the Pirates (cue Gerrit Cole and Jameson Taillon), our optimism increases. Well, we have Tyler Anderson with some intriguing pitch mix changes this year. After pitching for the Rockies for four seasons, Anderson recorded a 4.37 ERA, 1.39 WHIP, 15.8% strikeout rate, and 9.6% walk rate for the Giants in 2020. Not sexy or exciting at all, but Anderson typically held strikeout rates above 21% in previous seasons. Still not great, but let’s take a look at whether we should buy or sell Anderson’s 4.02 ERA in three starts.

Tyler Anderson went at least five innings in each start with three earned runs or fewer in each start. Anderson has a 20.9% strikeout rate and 6% walk rate with a 13.7% swinging-strike rate over 3% higher than his 2019 and 2020 numbers. He typically relied on his four-seamer and changeup over 71% of the time with a cutter he used 18-19% of the time. However, in 2021, Anderson’s most used pitch involves his cutter at 34.9%. Anderson almost doubled his cutter usage, and it typically elicited a decent swinging-strike rate.

Early on, Anderson’s cutter is resulting in batters chasing that pitch outside the zone. The movement profile hasn’t changed much on his cutter, but it’s an intriguing pitch mix change that could positively impact his outcomes moving forward. Regardless, Anderson still ranks as a deep-league streamer, so not someone to add immediately unless we have a decent two-start week on tap. Monitor Tyler Anderson for now and see how it shakes out for him in future starts.

After some rough seasons in Baltimore, Alex Cobb joins the Los Angeles Angels. Anytime a pitcher moves away from a hitter-friendly ballpark like Baltimore or Colorado, our eyebrows should perk up like The Rock. On the surface, Cobb holds a 4.63 ERA through 11.2 innings, but we find some exciting changes under the hood. Throughout his career, Cobb only reached a strikeout rate above 20% twice back in 2013 and 2014 with the Rays. However, Cobb boasts a 34.7% strikeout rate and a 4.1% walk rate in 2021. Whoa, so what changed?

With the spike in swings and misses, Alex Cobb is using his splitter over 45% of the time compared to a usage rate of around 35% in 2020. We know splitters can have ups and downs throughout the season. That said, should we buy or sell Cobb’s pitch mix and whiff rate changes? I’m buying into Cobb’s changes, but let’s see if the strikeout rate keeps up. Overall, Cobb still rates as a deep-league streamer that’s pushing 10-12 team relevancy.

When we dig a little deeper, Boyd increased his changeup usage after primarily using his four-seamer and slider. His slider has always been a major whiff pitch and that dropped down a bit to start in 2021. Boyd lowered his four-seamer usage in 2021 to 40.3% from about 50% in 2019 and 2020. However, the major pitch mix change involves his changeup that looks solid so far in 2021. The table below shows some of the usage and whiff rate changes.

In looking at Boyd’s pitch-by-pitch results over the past three seasons, Matthew Boyd isn’t missing as many bats so far in 2021. However, the changeup usage and results help us to buy into his positive results in 2021. I expect Boyd’s swinging-strike rate with his slider to return to his career norms, which answers the buy or sell question. When a lefty adds a consistent changeup, it helps keep righties off-balance as it dives down and away from right-handed hitters.

Sure, he isn’t sustaining the low ERA since he hasn’t allowed a home run. Then, add in a low .276 BABIP that differs from his recent BABIP of .307 and .308, and he’s due for some regression. However, I expect the strikeouts to tick up even if though the ERA will rise as well. Let’s just hope the ERA doesn’t jump too much. Buy into Boyd where you can in case he finally exceeds expectations in 2021.

Although I don’t listen to Jazz music, I imagine it’s similar to the sweet music coming off of Jazz Chisholm’s bat. So far, Chisholm shows increased patience evidenced by his improved walk rate and chase rate. Although Chisholm isn’t making league-average zone contact or contact rates, he isn’t chasing a ton. Granted it’s a small sample, but Chisholm holds a 17% walk rate and 26.4% strikeout rate compared to an 8.1% walk rate and 30.6% strikeout rate in 2020. Those plate discipline metrics tell us he’s struggling to make contact, but it’s good to know he’s not chasing outside the zone.

Although Chisholm’s 25% HR/FB rate looks high from his career norms in the minors, he raised his line drive rate to a healthy 24.1%. When Chisholm makes contact, it’s loud contact with a 27.6% barrel rate, 111.7 mph maximum exit velocity, and 51.7% hard-hit rate. Chisholm looks like he’s heating up with a hit in eight out of his past nine games. Before Wednesday’s game, Chisholm boasted a .400 batting average with three home runs, six runs, five RBI, and one steal with a .516 OBP during that stretch. On Wednesday, Chisholm batted leadoff for the first time this season and stole another base. Monitor that lineup placement. If Chisholm maintains a high walk rate yet struggles to make contact, that can still work well for him with the improved OBP skills.

So should we buy or sell Chisholm’s hot start? Before the season, I hesitated with Chisholm given his strikeout rates. However, in the early samples, we notice Chisholm displays patience and the strikeout rates relate to making contact in the zone. As mentioned earlier, that plate discipline profile can play if he continues to make loud contact and maintains his OBP skills. After watching and analyzing Chisholm more closely, I’m buying into his hot start and wish he ended up on more than just my TGFBI team.

What a throwback year in 2021 with Jed Lowrie and Josh Harrison playing well. For Lowrie, it’s partly due to battling injuries in recent years. To start 2021, Lowrie hit the ground running with a seven-game hit streak heading into Sunday, and a hit in eight out of his past ten games. He hasn’t produced fantasy viable stats since 2018 with the Athletics due to injuries. That season, Lowrie finished with 23 home runs, 78 runs, and 99 RBI with a .267 batting average.

Through 68 plate appearances in 2021, Lowrie has a .317 batting average, two home runs, 12 runs, and 12 RBI. Any fantasy manager that bought in earlier in the season must feel great about Lowrie up to this point.

Lowrie looks like he’s hitting the ball harder than ever at 37 years old. It’s possibly a small sample due for regression, but Lowrie holds a 13% barrel rate, 108.1 mph maximum exit velocity, .390 wOBA, and 50% hard-hit rate. The table below shows his 2021 start compared to his 2018 season and career averages since 2015 per Baseball Savant.

Although Lowrie isn’t known for his hard-hit ability, it’s still notable since he displays above-average plate discipline. When we have a mix of above-average plate discipline and contact rates plus a hitter barreling up the ball – it typically translates to fantasy production. In the past, Lowrie accumulated plate appearances and counting stats with a solid .260-.270 batting average. I’ll buy the bounce back for Lowrie, but we’ll see if the hard-hit data keep up over a larger sample.