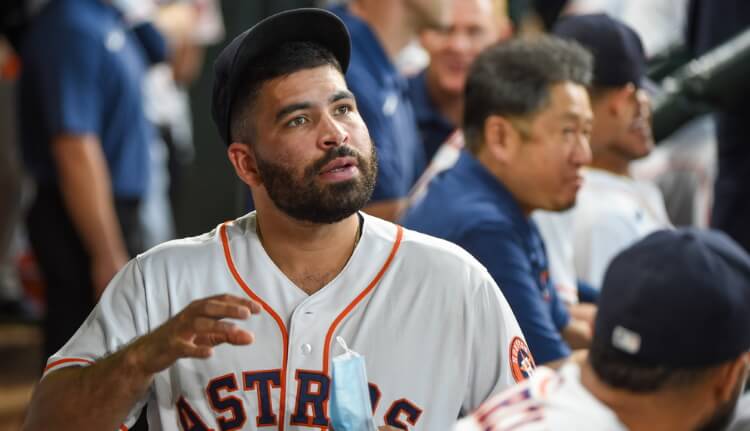 As we head to the middle of June, it’s time to evaluate whether to buy or sell these players on our rosters. Even in leagues without trades, we want to examine the underlying skills and whether we find sustainable or questionable metrics. With one pitcher in this week’s buy or sell installment, it’s a favorite of mine and other analysts in José Urquidy. Meanwhile, Graham Ashcraft leaped into our lives via the waiver wire with decent results in his two-start week. Check out the past buy or sell articles, and feel free to comment or hit me on Twitter for any questions or suggestions for future pitchers to evaluate. 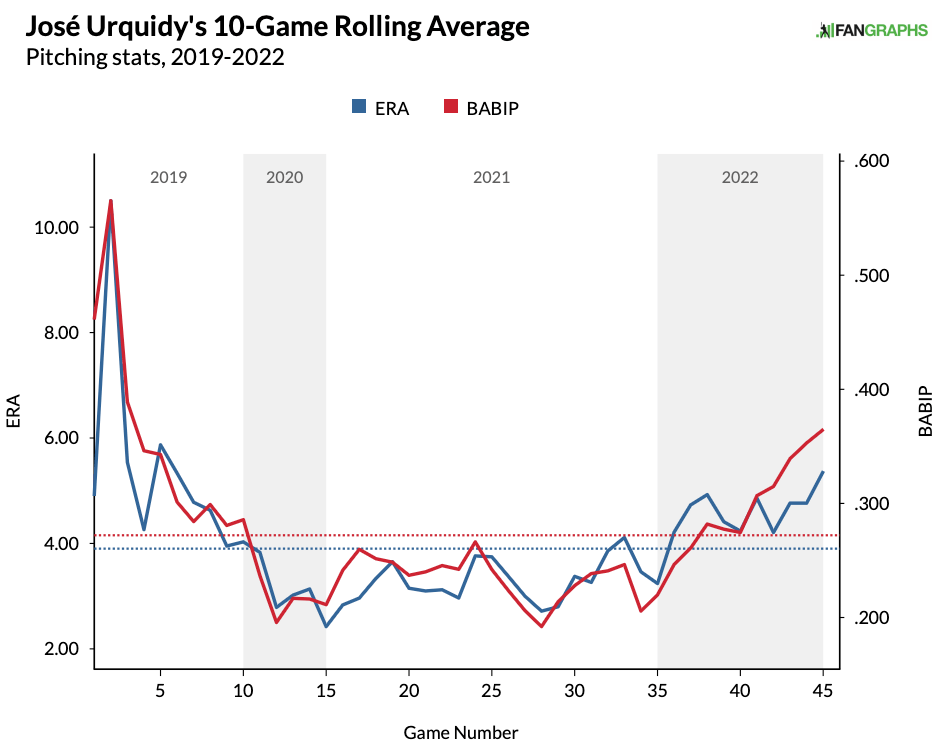 In 2022, Urquidy added a cutter he throws 13.8% of the time, primarily to righties. It has the best results with a .227 BA, .273 SLG, and .260 wOBA on the cutter, though the rest of his pitches don’t. Urquidy typically relied on the four-seamer (53.2%) and changeup (17.3%) to account for 70-75% of his arsenal. Sometimes when a pitcher changes their pitch mix with positive results, we lean toward buying rather than selling their profile. 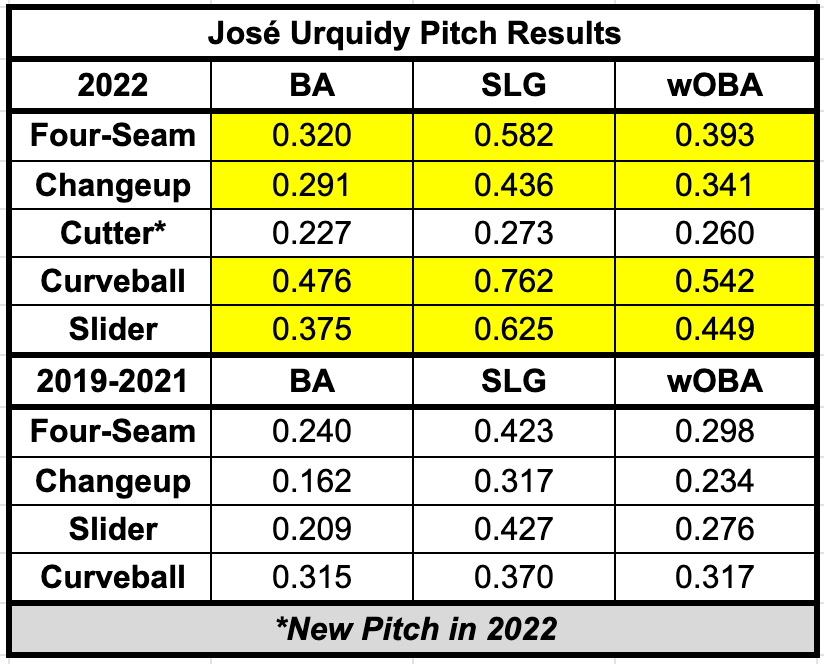 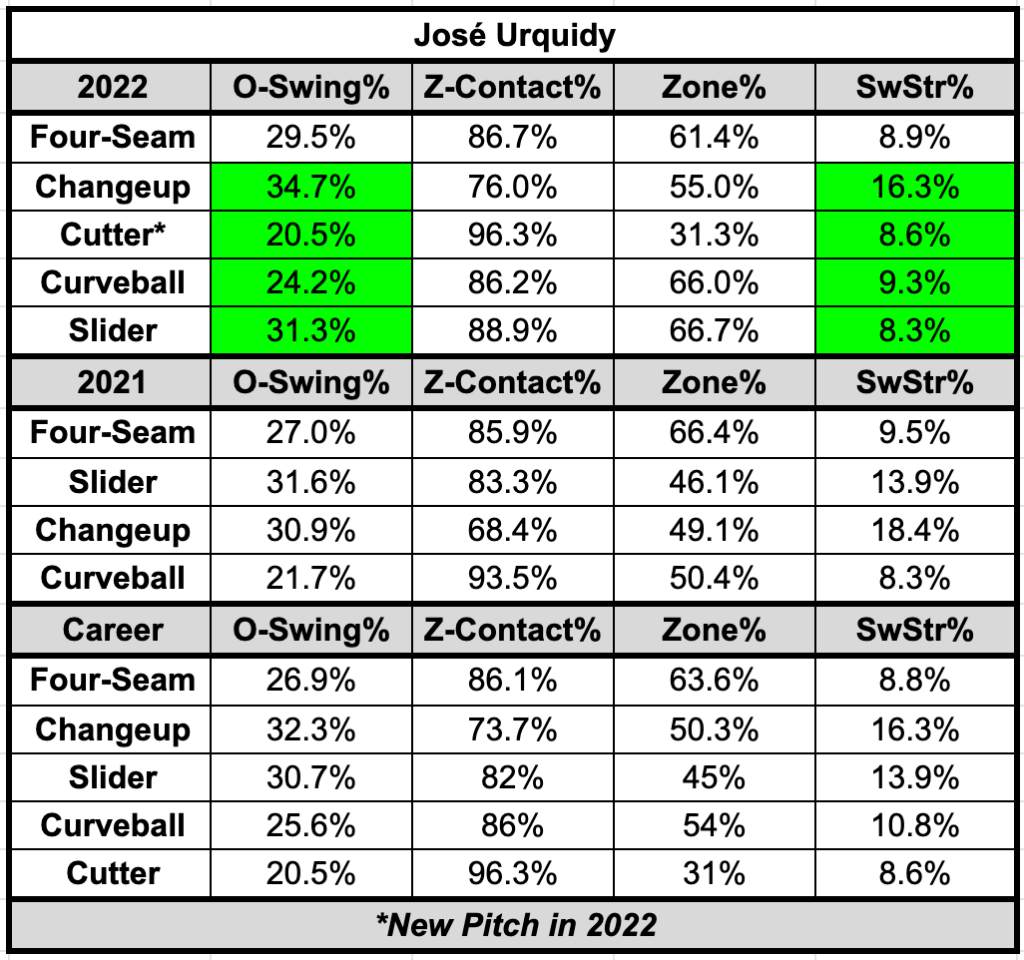 Urquidy doesn’t possess a profile for strikeout upside which it limits his upside with only one pitch in the changeup with a high SwStr%. It seemed that Urquidy might have reshaped the slider, but he throws the cutter nearly eight mph faster. Outside of the pitch mix change, the results on the rest of the pitches stand out.

It’s worrisome to find four of Urquidy’s pitches resulting in worse outcomes from the past seasons. Unfortunately, Urquidy hasn’t been effective against righties or lefties, as he has struggled against both-handed hitters. Most of Urquidy’s pitches have similar movement profiles, except the curveball adding an inch of drop and the slider with nearly two inches of break. Maybe the results will regress closer to past seasons, but we have multiple red flags having us wonder whether buy or sell low in 2022.

The projection systems expect Urquidy’s BABIP to regress closer to the career norms with a BABIP of .283. Urquidy’s BAT projections include a 17.9% K%, 5.8% BB%, a 1.48 HR/9, 4.51 ERA, and 1.27 WHIP. Assuming the BABIP and home run rate improve, it will help Urquidy’s ratios. Although the cutter results look fine to generate weak contact, hopefully, Urquidy mixes in the slider for a second pitch with a double-digit SwStr%. Overall, Urquidy as a one-pitch pitcher or streamer makes it less exciting to buy low, but maybe sell as he might be closer to a Brad Keller-type profile.

The No. 7 @Reds prospect struck out four across six scoreless, lowering his ERA to 1.14: pic.twitter.com/gHfn5dgiPp

Graham Ashcraft's slider has over six inches vs. the average in horizontal & vertical movement.

Teammate Kyle Farmer noted that Ashcraft’s stuff could be filthier than Luis Castillo’s. Although it’s probably too early to make that claim, Ashcraft’s slider has nearly six inches versus the average in vertical and horizontal movement. That typically translates into a weak contact plus swings and misses. It’s a small sample, but the slider results in a .143 BA, .257 SLG, and .172 wOBA, which likely regresses, though it’s positive that it aligns.

Given the BABIP and LOB%, Ashcraft’s ratios should regress. That hints at selling more than buying into Ashcraft’s profile. As a prospect, Ashcraft rated as a “stuff” over command or control pitcher, which means more variability in the future. Although Ashcraft’s 3.63 FIP, 3.79 xFIP, and 3.95 SIERA don’t look awful, THE BAT projects him for a 4.42 ERA and 1.41 WHIP. Don’t be afraid to churn Ashcraft if the BABIP and LOB% regress, assuming the stuff and movement profiles don’t translate into strikeout skills.