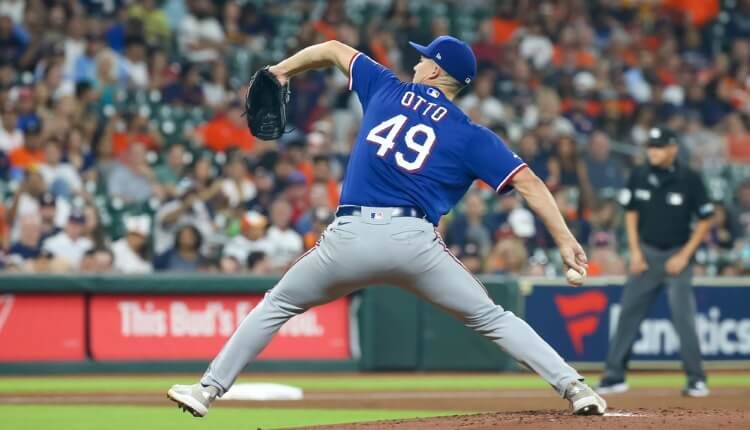 In this week’s buy or sell installment on pitchers, we’ll examine two deep-league starting pitchers with intriguing metrics in their own right. So far, we covered 17 starting pitchers during the in-season pitcher buy or sell series. The former Astros pitching coach Brent Strom joined the Diamondbacks, which seemingly led to a positive impact, though it’s reasonable to question how much. We’ll discuss a few surprising pitching metrics for the Diamondbacks when examining whether to buy or sell Humberto Castellanos. Then, we have Glen Otto, who profiles as having above-average stuff, and enticing metrics when we look beyond the ratios. Comment or hit me up on Twitter if you’re curious about a starting pitcher.

Before the season, I poked around on Glen Otto because the slider movement profile popped. In the small sample of 23.1 innings, Otto’s 25.2% strikeout rate and 7.2% walk rate looked solid in looking beyond the 9.26 ERA and 1.71 WHIP. The .423 BABIP and 45.9% LOB% indicated Otto ran into some misfortune. 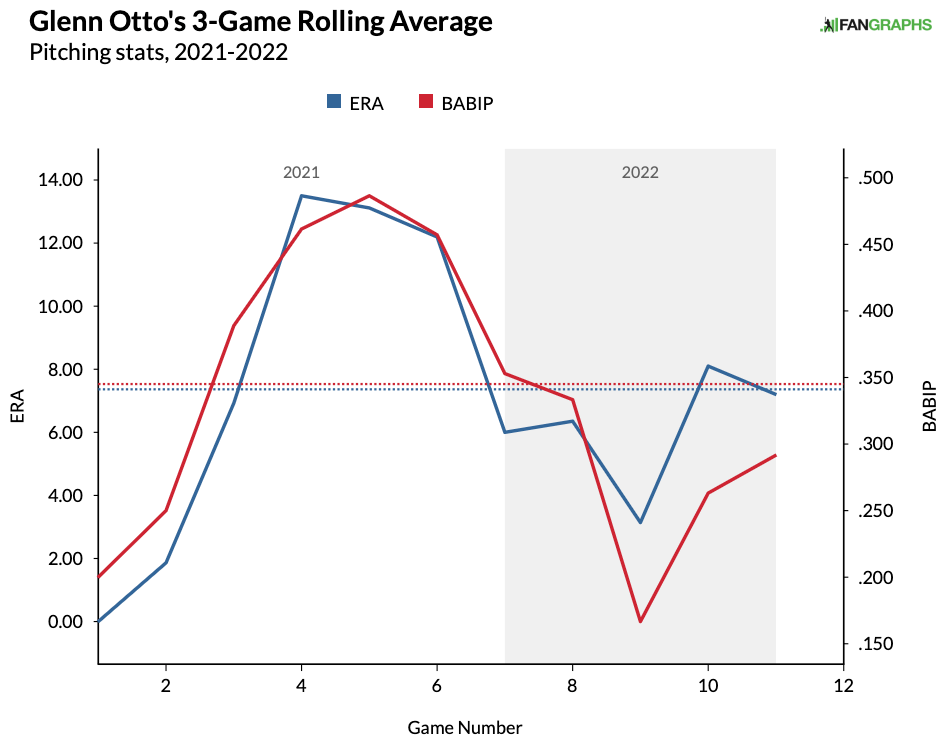 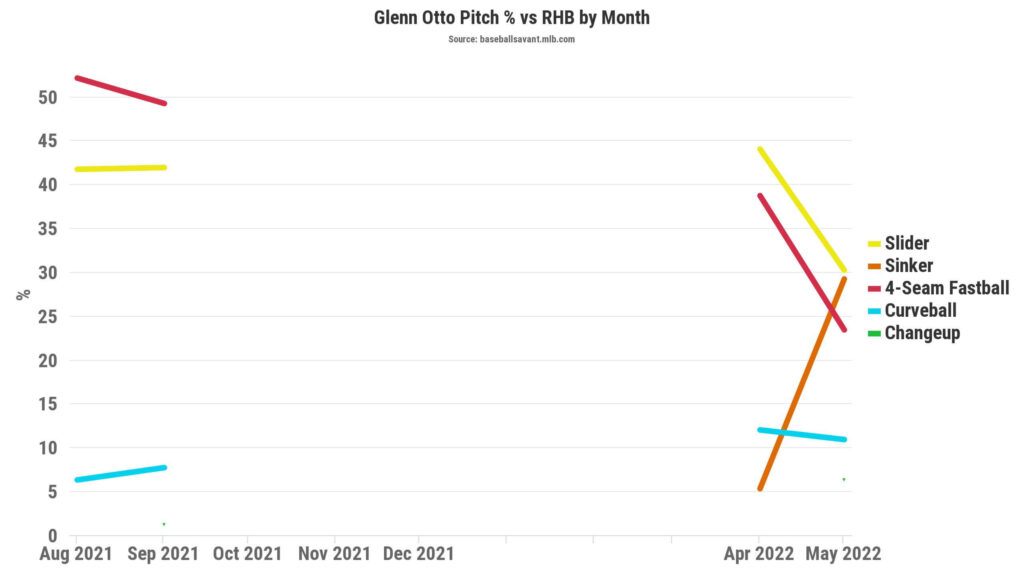 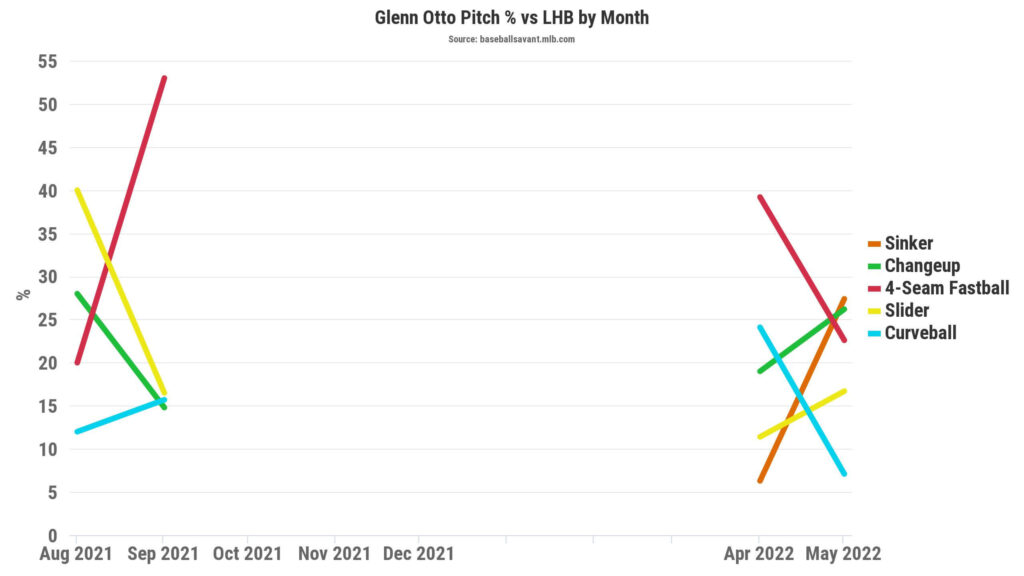 Otto nearly doubled his changeup usage, mostly against lefties, from 17.1% to 22.7%. However, the results on the changeup haven’t been great against lefties with a .500 BA, 1.000 SLG, and .652 wOBA. The 21.1% Whiff% versus left-handed hitters doesn’t stand out either. Typically, it’s positive for a pitcher to increase their changeup against opposite-handed hitters, but the results haven’t been positive. 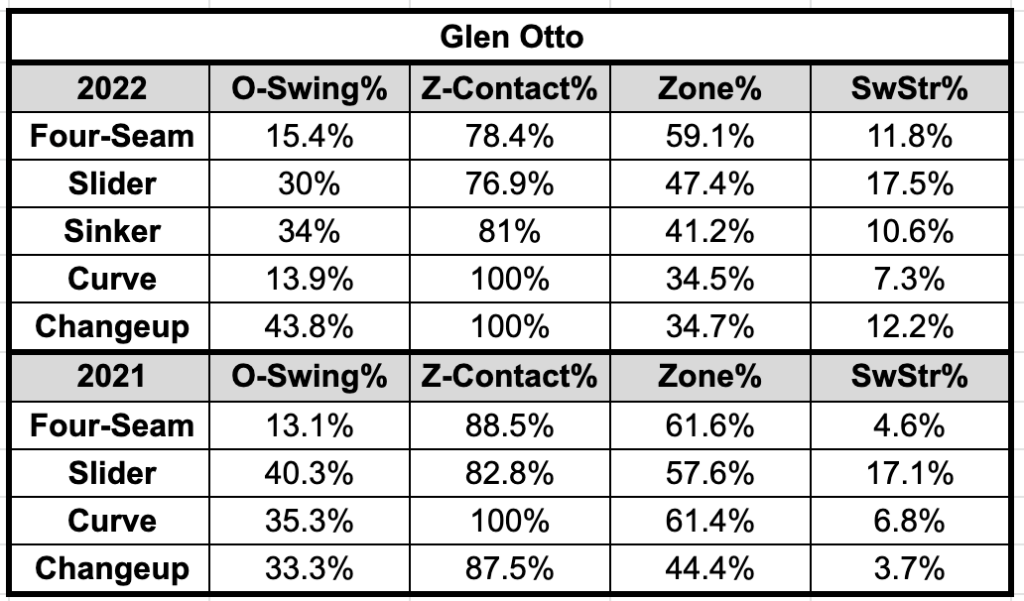 Interestingly, Otto has three other pitches with a double-digit swinging-strike rate, including the sinker at 10.6%. It’s a new pitch for Otto, but we typically don’t see sinkers eliciting whiffs. However, Otto’s sinker has above-average arm-side fade as he locates it down and inside towards right-handed hitters. The sinker hasn’t allowed a single hit.

It’s a small 2022 sample, but the zone rates on all pitches dropped in 2022 versus 2021. That could mean Otto has struggled to command his pitches and control the zone aligning with the lowered strikeout and increased walk rates.

Also, Otto’s curveball possesses drops more than the average at 3.1 inches. It has the lowest swinging-strike rate at 7.3%, with a measly 13.9% O-Swing%. However, the results look decent with a .200 BA, .300 SLG, and .327 wOBA as he mixes it evenly against both-handed hitters.

We should expect more strikeouts via Otto due to the overall swinging-strike rate and multiple pitches with a double-digit rate. Those metrics lead us to buy versus sell, but the league size and context matter. It seems likely that Otto’s 1.48 HR/9 should regress and drop since that wasn’t an issue in the minors with a 0.37 HR/9 throughout his MiLB career. Otto is an enticing waiver wire pick up in 15-team leagues with a roster rate of 60% in 15-team NFBC Leagues. In deeper dynasty formats, Otto warrants attention as someone to scoop up or acquire via trade if the swinging-strike rates translate into more strikeouts.

The Diamondbacks rotation has presented several fantasy-relevant options besides Zac Gallen in Merrill Kelly, Humberto Castellanos, and Madison Bumgarner. Maybe it’s partly former Astros pitching coach Brent Strom joining the Diamondbacks in 2022 or early success that will regress. As a team, the Diamondbacks starting pitchers rank 13th in ERA (3.53) and ninth in WHIP (1.15), yet 23rd in FIP (4.20). Their success relies on limiting the hits with a .247 BABIP (No. 1), but the 20th ranked K-BB% at 11.6%.

Castellanos’ slider elicits a 6.8% SwStr% – the third-best amongst his five pitches. The curveball generates a 12.8% SwStr% as his best whiff pitch, though the results aren’t great, with a .321 BA, .643 SLG, and .427 wOBA. Castellanos relies on the sinker and curveball against right-handed hitters, but the curve results remain similar with a .682 SLG and .443 wOBA. 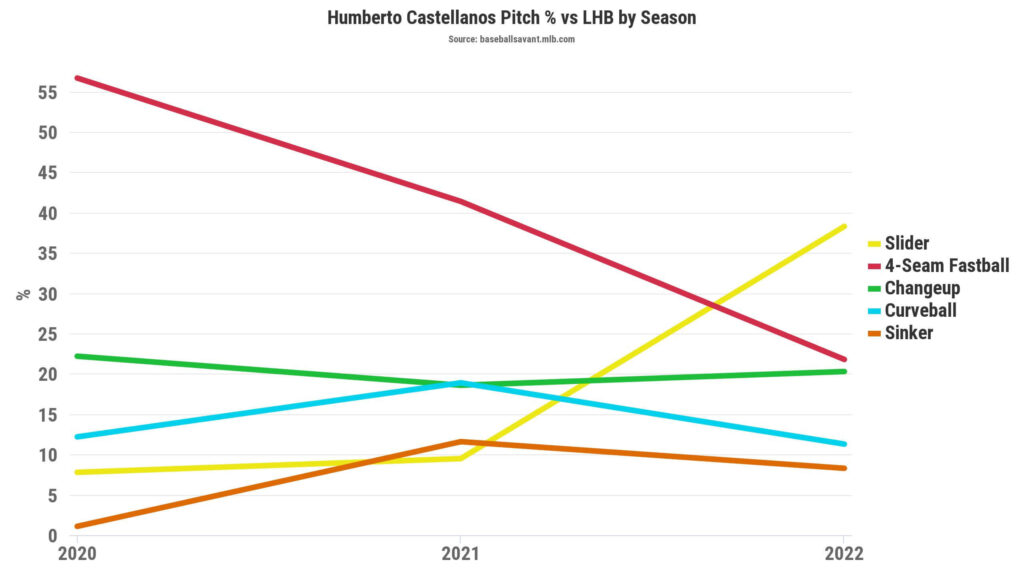 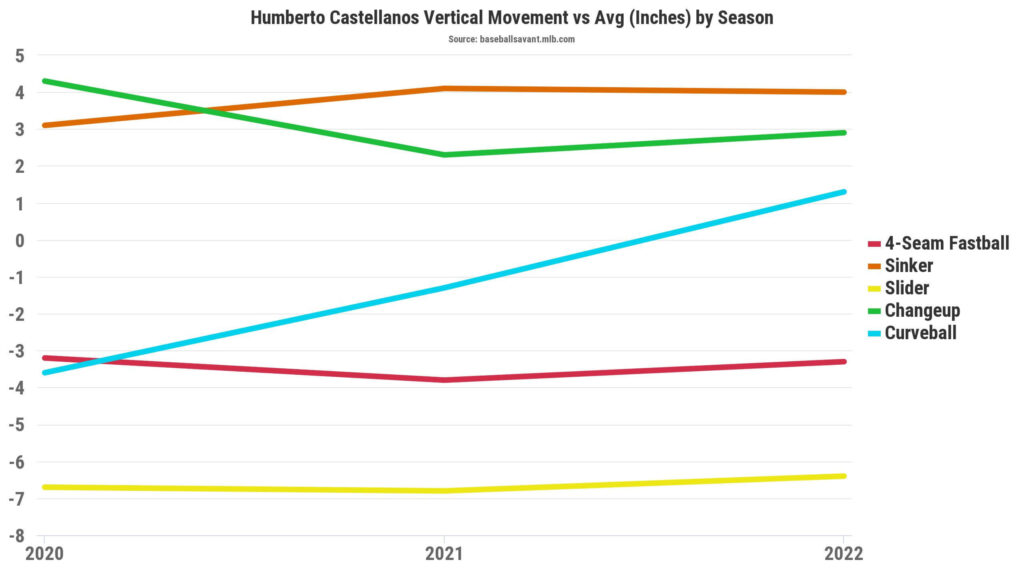 The sinker and changeup for Castellanos have a ton of vertical movement, with the offspeed pitch also fading 1.4 inches versus the average. Compared to 2021, the changeup has added two inches of drop and fade, which translated into better results with a .211 BA, .263 SLG, and .232 wOBA in 2022.

Although it’s an unexciting profile, Castellanos posted four straight starts with five-plus innings with a 3.32 ERA, 0.97 WHIP, 20.7% strikeout rate, and 3.4% walk rate. However, he produced by limiting the BABIP to .217 with a high 93.3% LOB%. Seven of eight earned runs Castellanos gave up came via the long ball in the past four games, so we’ll want to monitor that. Buy into Castellanos as a streaming pitcher in 15-team leagues with a limited ceiling.