In last week’s pitcher installment of the buy or sell series, we examined two lesser-known pitchers – Glen Otto and Humberto Castellanos. The MLB offensive environment has heated up in May via runs and home runs per plate appearances, which means tread with caution when streaming pitchers or have patience. We’ll discuss two widely known pitchers, Frankie Montas and Miles Mikolas. They’re both performing well with intriguing metrics under the hood. Hit me up on Twitter with any questions or future buy or sell suggestions. 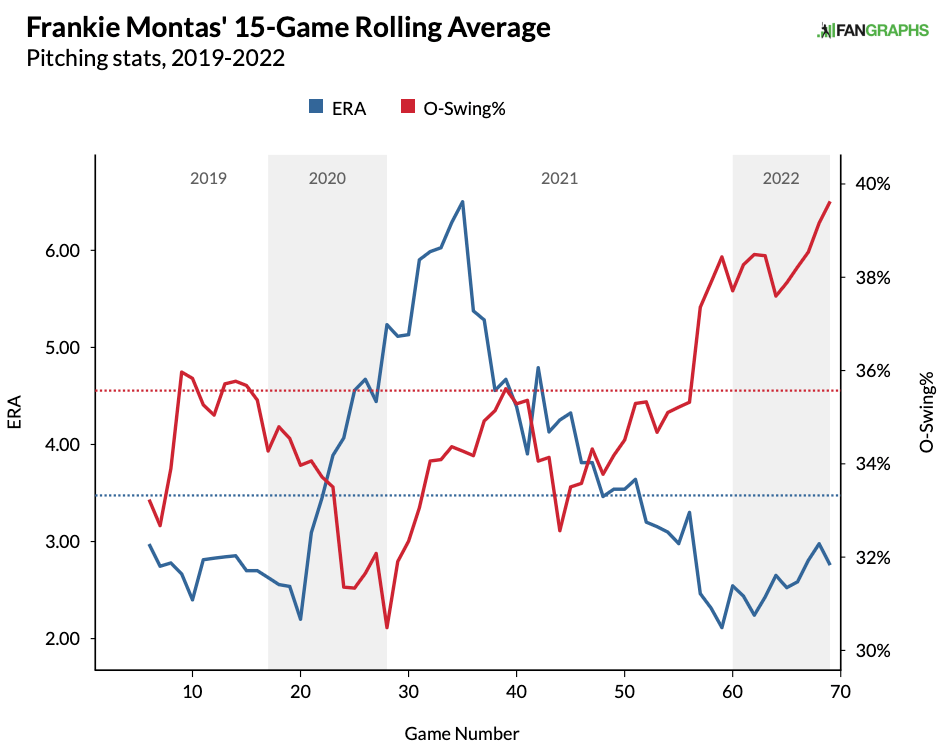 Montas has generated a chase rate (39.8%) over three percentage points higher than 2021, with a slight bump in the swinging-strike rate (14.1%). So far, the underlying metrics lead us to buy more than sell for Montas. However, let’s dive into the arsenal and results.

The Arsenal & Results For Montas 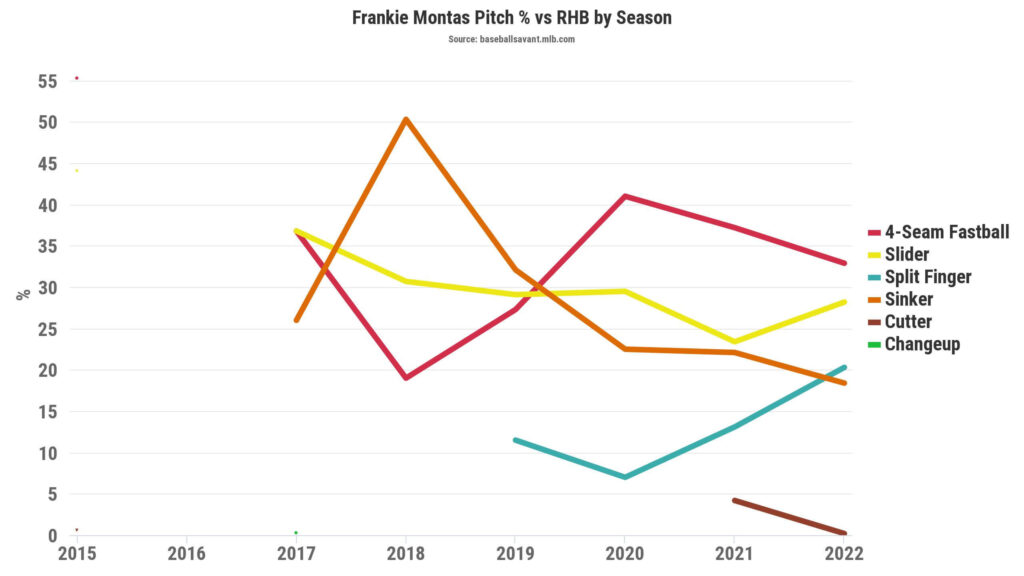 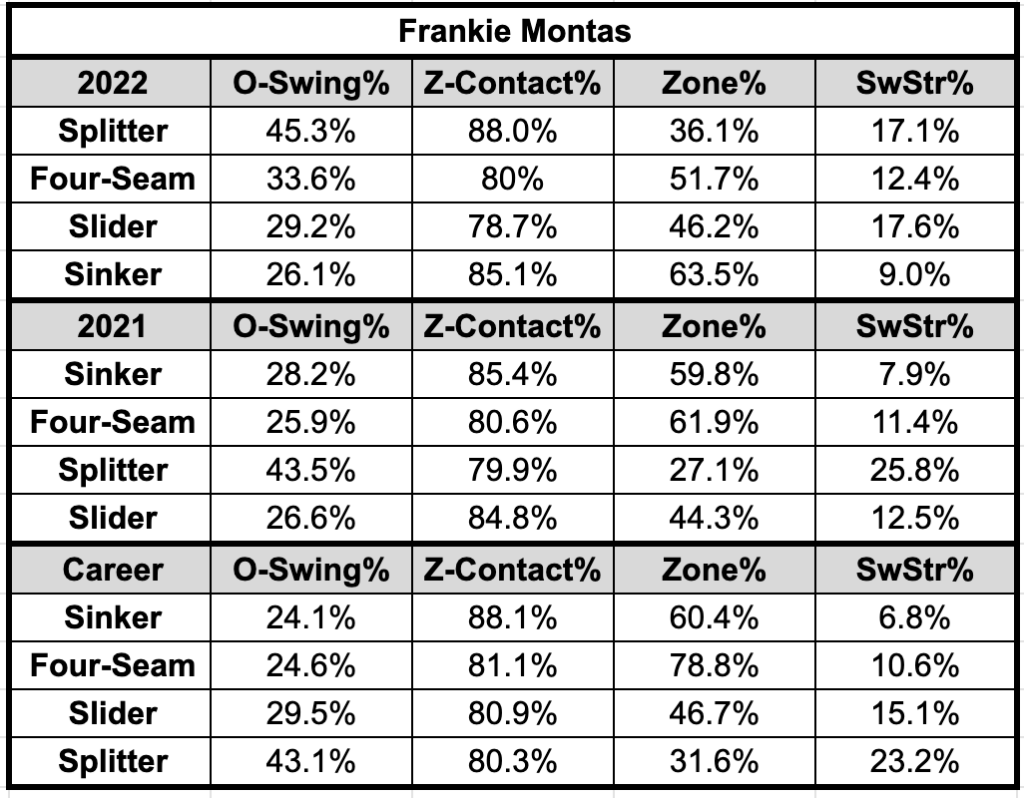 Interestingly, the swinging-strike rate on the splitter dropped to 15.3%, down almost eight percentage points from the career average. However, it’s positive to see the high chase rate, evidenced by the 45.4% O-Swing% on the splitter. 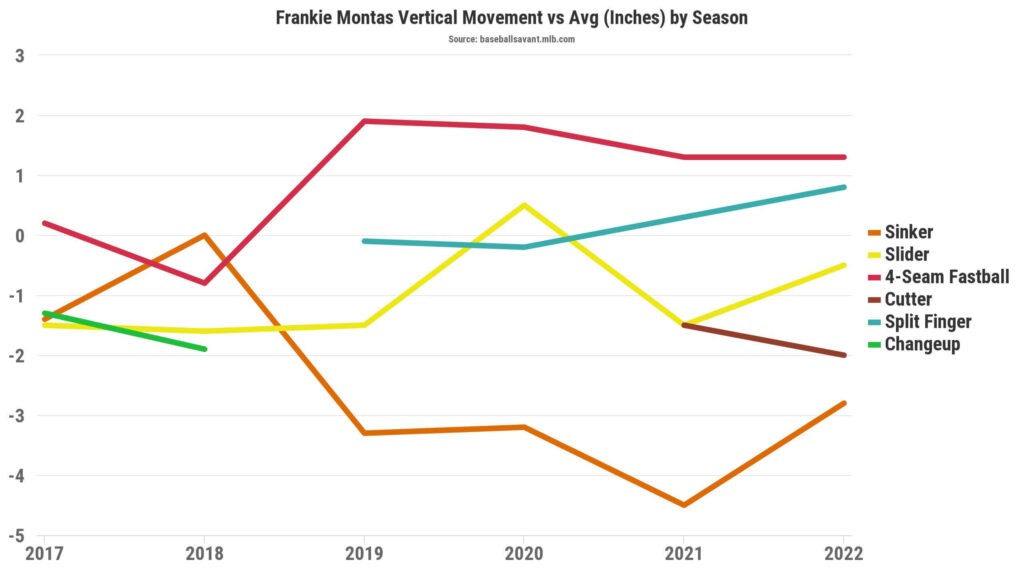 Montas’ splitter is dropping almost three inches more and fading five more inches in 2022 versus 2021. That translates with the elite batted ball results on the split-finger. Also, the splitter generates a career-best 64.3% GB%, almost 12 percentage points higher than 2021.

Thankfully, the slider swinging-strike rate improved to 17.2%, up nearly five percentage points from 2021. The batted ball results align with a .160 BA, .400 SLG, and .240 wOBA versus the slider. Interestingly, the slider’s velocity decreased about 1.5 mph with a similar spin rate yet added three inches of drop, though not an above-average movement profile.

Several of the underlying metrics point to buying versus selling Montas in 2022. Montas boasts three pitches with a double-digit SwStr%, plus the ability to limit the contact quality. After leaving a game early on May 21 with a hand injury, it’s positive to see Montas return with an 11 strikeout outing versus Texas with seven scoreless innings.

Granted that it’s the Rangers, but the splitter had a 56% Whiff%, with the slider close behind at 40%. Montas has also been crushing in quality start leagues with six QS in ten games. Outside of the weak team context with 2.7 Run Support per Game versus a league average of 4.1. The Athletics rank third to last with 3.5 Run Support per Game in front of the Pirates and Tigers. 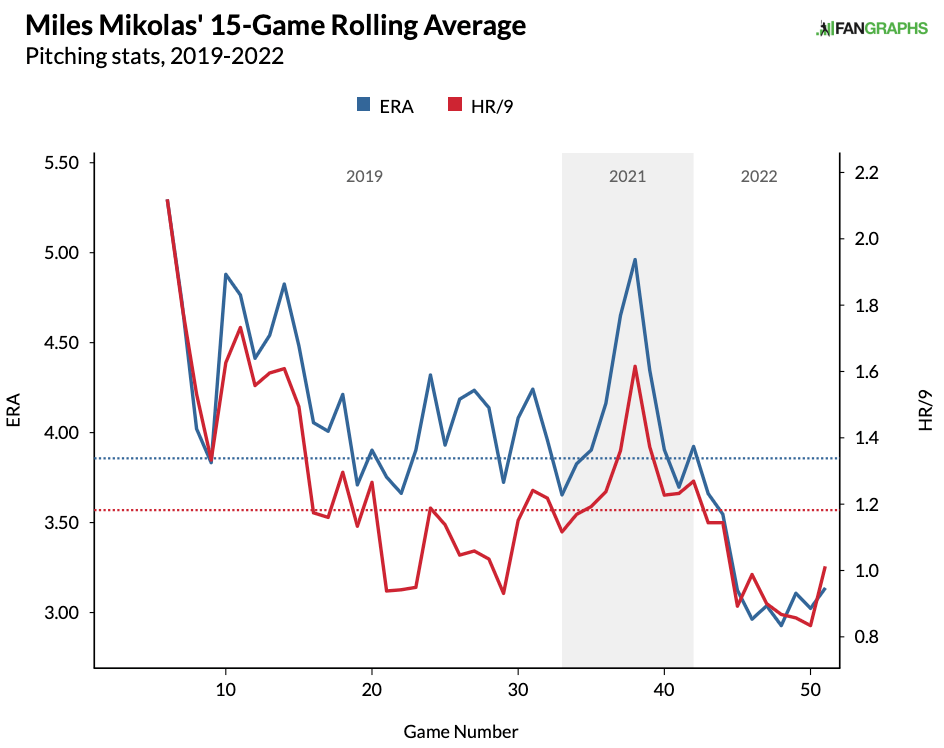 The Arsenal & Results For Mikolas 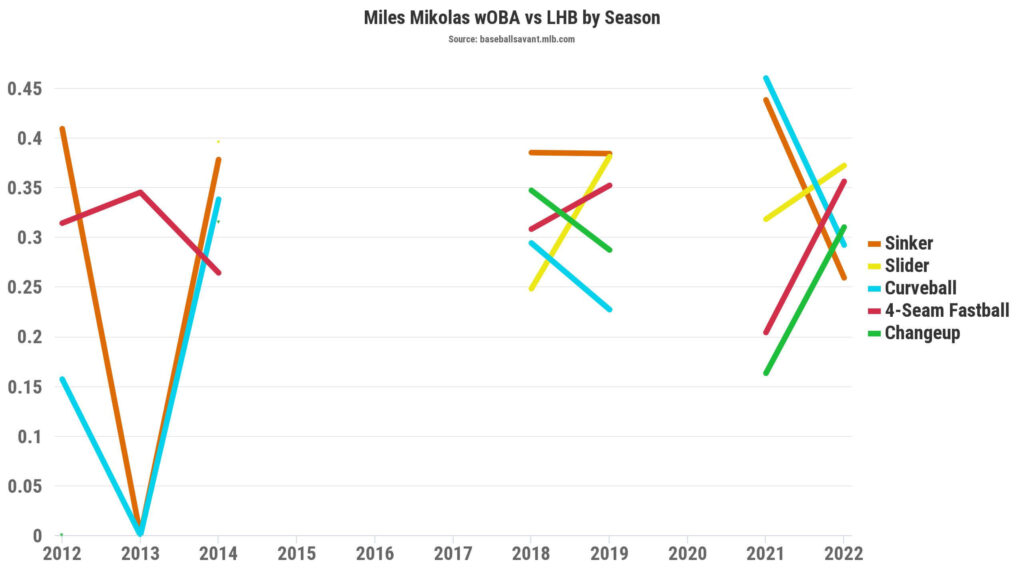 Interestingly, the results against the curveball and sinker improved from 2021. Mikolas increased the curveball usage against left-handed hitters with a .200 BA, .360 SLG, and .292 wOBA. Although it’s not a big whiff pitch, the curveball allowed a .400 BA, .600 SLG, and .460 wOBA in 2021 against lefties. Mikolas uses the curveball to generate a 60.7% GB% up from a career GB% of 54.3%, which likely translates into the improved batted ball results.

In theory, it’s good to pair Mikolas with a high strikeout pitcher since he pitches to contact with a career strikeout rate of 17.8%. The FIP (3.40) and xFIP (3.78) seem like more reasonable outcomes for Mikolas, assuming the BABIP, LOB%, and HR/FB% regresses. The BAT projects Mikolas for a 4.34 ERA, 1.29 WHIP, and a 10.8% K-BB%, aligning with the potential regression concerns. That hints at selling, not buying the early results, or tread with caution in future games. With five quality starts over the past seven games, it gives Mikolas a high floor. Thankfully, Mikolas also pitches on a Cardinals team with the sixth-highest Run Support per Game at 4.9, meaning theoretically more chances for wins.