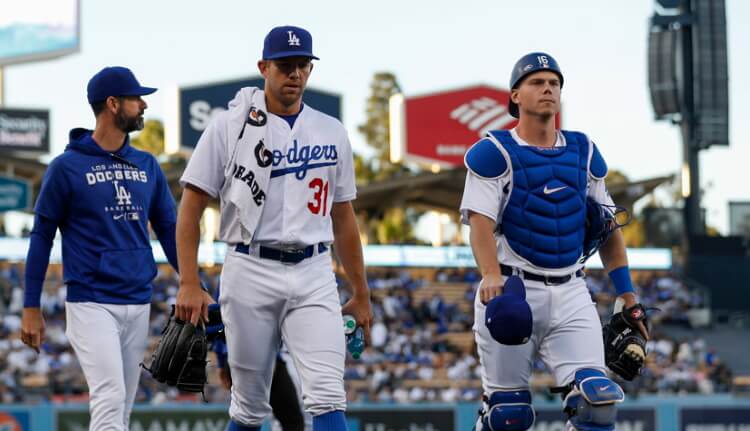 In this week’s fantasy baseball buy or sell installment, we examine two starting pitchers with filthy changeups in Tyler Anderson and Patrick Sandoval. Anderson has overperformed our expectations with the Dodgers, though the skills sneakily improved. Meanwhile, Sandoval’s ratios look decent, but we’re hoping for more. We’re hoping to identify whether to buy or sell their performances and skills. Can they bounce back or maintain these skills?

Unsurprisingly, the .272 BABIP and 84% LOB% remain better than Anderson’s career BABIP of .294 and LOB% of 72%. Furthermore, Anderson’s 14.5% SwStr% and 41.3% O-Swing% rank as career bests. The O-Swing% increased four percentage points from 2021, but eight points from the career norms. Anderson typically boasted an SwStr% at a double-digit rate, but that jumped three percentage points in 2022. The early results and surface metrics hint at buying more than selling.

The Dodgers remain one of the organizations to trust with pitchers, and Anderson’s pitch mix change stands out. Anderson typically relied on the four-seamer, cutter, changeup, and sinker, but he has adjusted that in 2022. 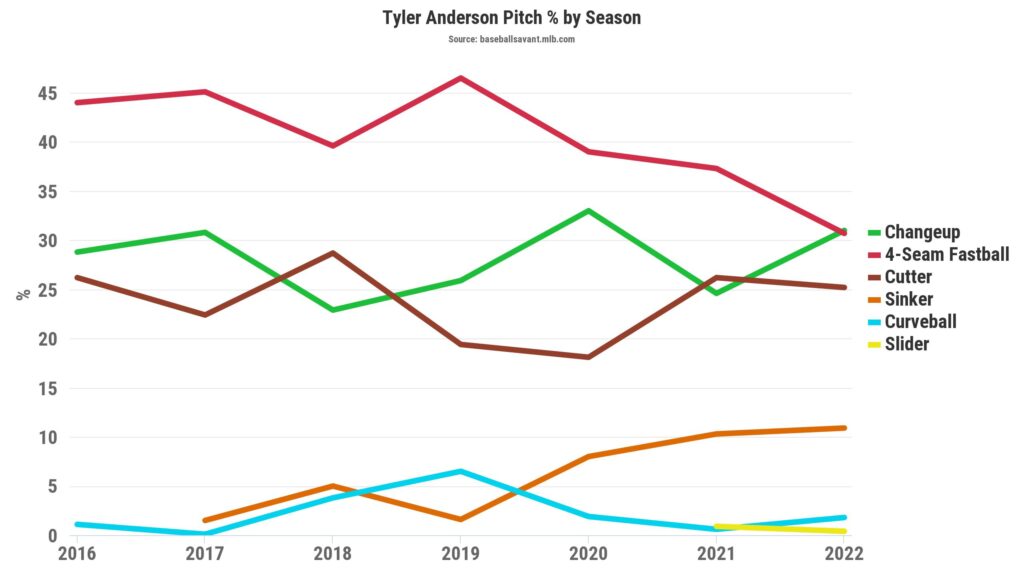 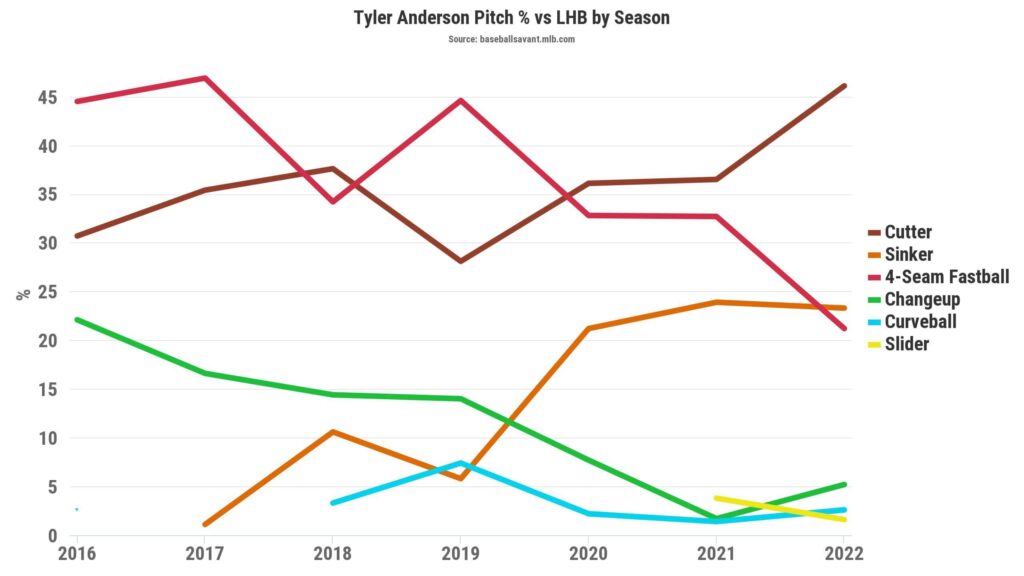 Against lefties, Anderson increased the cutter by nearly ten percentage points for near-elite results with a .147 BA, .235 SLG, and .166 wOBA. His cutter has above-average vertical movement at four inches more versus the average, similar to 2021. Anderson locates the cut fastball down and away from left-handed hitters. Overall, Anderson’s pitch velocity and movement profiles remained the same, yet the results improved.

Although Tyler Anderson doesn’t possess the flashiest stuff, he commands his pitches well and controls the strike zone. Since Anderson’s seven earned run performance against the Phillies, he had five straight quality starts, including four straight scoreless games. Against the Mets on Friday, Anderson’s changeup looked filthy with a 63% Whiff%. It’s Anderson’s best Whiff% on the changeup, with more than 20 thrown in 2022.

With Anderson boasting two quality pitches in the changeup and cutter with his approach, we should buy into not sell the changes. THE BAT rest of season projections bake in regression with a 4.57 ERA, 1.27 WHIP, .284 BABIP, and 70% LOB%. However, I would expect Anderson to post an ERA near his current 3.13 FIP or 3.29 SIERA at the end of the season.

From one lefty changeup pitcher to another, let’s examine Patrick Sandoval in our weekly buy or sell installment. In NFBC leagues, Patrick Sandoval had an ADP inside the top-200 picks. After a 3.72 ERA, 1.21 WHIP, and 16% K-BB% in 2021, Sandoval landed as a breakout pitcher candidate for 2022.

Sandoval posted mixed results with seven starts of three earned runs or fewer, with two at the beginning of the year where he only went four innings. That makes up four quality starts in the past seven games. Unfortunately, Sandoval allowed five earned runs versus Toronto, then a shortened outing of 4.2 innings, four hits, two earned runs, four walks, and four strikeouts.

In Sandoval’s worst start versus the Blue Jays, the changeup barely elicited any whiffs with a 17% Whiff%. For context, Sandoval’s changeup generated a 50% Whiff% in six other starts with a season-long 47% Whiff%, likely indicating better results to buy rather than sell.

Interestingly, Sandoval’s changeup regressed with a 55% Whiff% with the slider generating a 56% Whiff%, though the walks and inefficiencies led to 94 pitches in 4.2 innings.

In 2021, Sandoval relied on the fastball, slider, and filthy changeup, plus a curveball he threw over ten percent of the time. Meanwhile, Sandoval increased the usage of his four-seamer and slider yet threw his best pitch less in the changeup, about six percentage points. 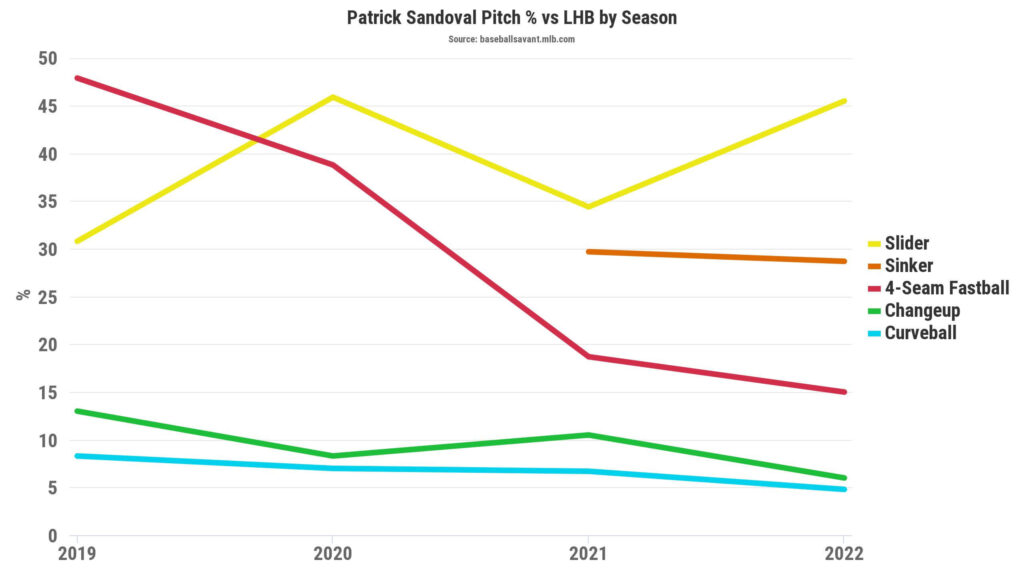 With the pitch mix change, sometimes it involves the pitcher throwing more of one or two pitches to a certain-handed hitter. With Sandoval, he has thrown the slider more to lefties and righties with a drop in changeup usage versus opposite-handed hitters. The four-seamer aligned with the slider increase, though only against right-handers. 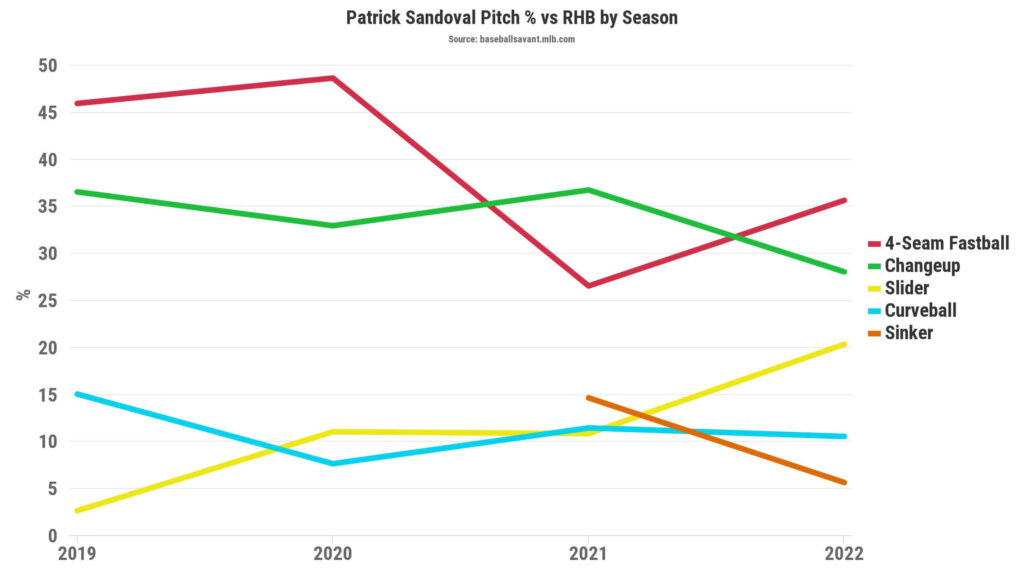 It’s interesting to see Sandoval lower the changeup usage versus righties since it’s a weapon to keep opposite-handed hitters off balance. However, we can’t complain about the elite results with a .093 BA, .093 SLG, and .140 wOBA against righties. 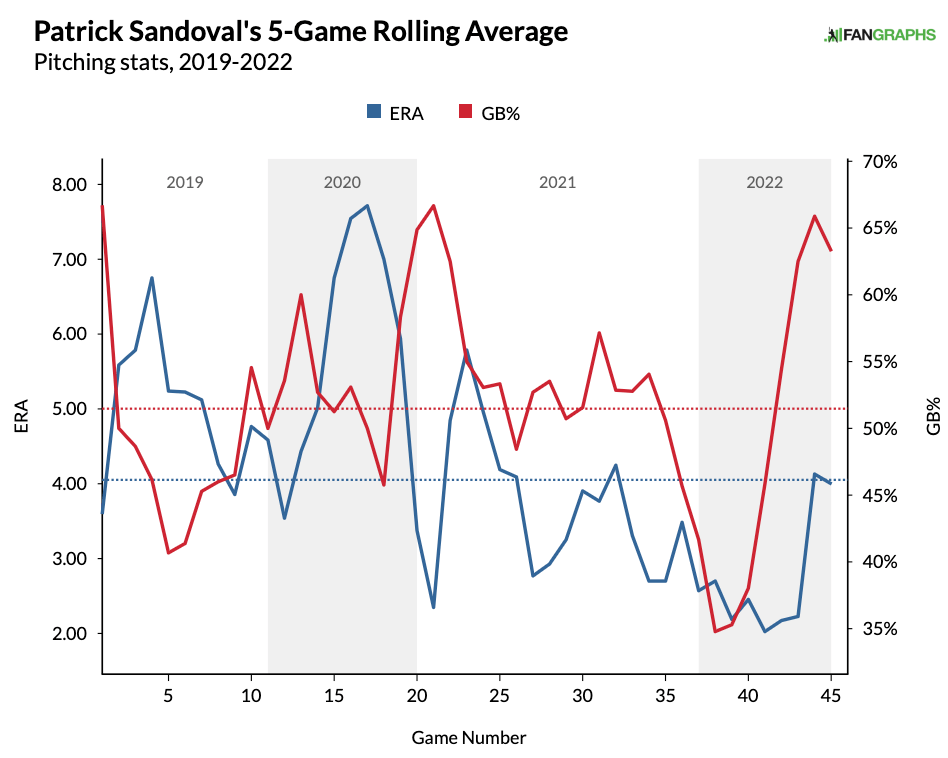 With an overall groundball rate of 52.6%, aligning with his career rate of 51.5%, Sandoval’s slider (56%) and changeup (60%) have generated more groundballs – five to six percentage points higher than 2021. What a filthy combination – groundballs on two of Sandoval’s best pitches that elicit an SwStr% north of 17%. That type of pitcher profile remains one to buy into rather than sell or fade. 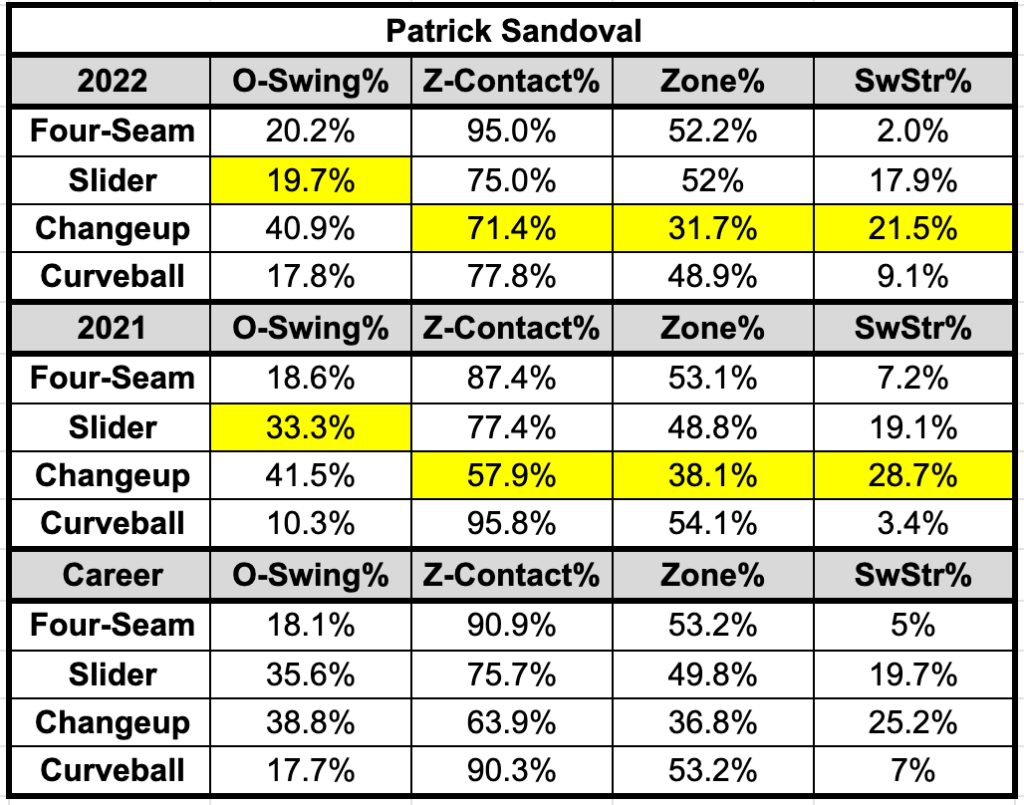 Sandoval is throwing the changeup less in the zone, but it’s allowing more zone contact. The changeup’s swinging-strike rate dropped, aligning with the pitch giving up more Z-Contact%. Interestingly, Sandoval’s slider also had a lower O-Swing%, though the Z-Contact%, Zone%, and SwStr% remained similar from 2021.

One area to monitor for Patrick Sandoval involves the zero home runs in 2022 versus a 1.15 HR/9 and a 16% HR/FB% throughout his career. Walks have also cropped up with a 10.8% walk rate in 2022, but we need the strikeout rate to increase closer to 25-26%, like in 2021. Thankfully, Sandoval’s ratios in the ERA improved without the BABIP or LOB% looking like outliers. Although we would like Sandoval’s SwStr% on the changeup to jump towards the 2021 numbers of 28.7%, the skills and results align with the early 2022 success with room for upside. Overall, Sandoval might have stretches of dominance or inconsistency, so weather the storm if you believe in him.