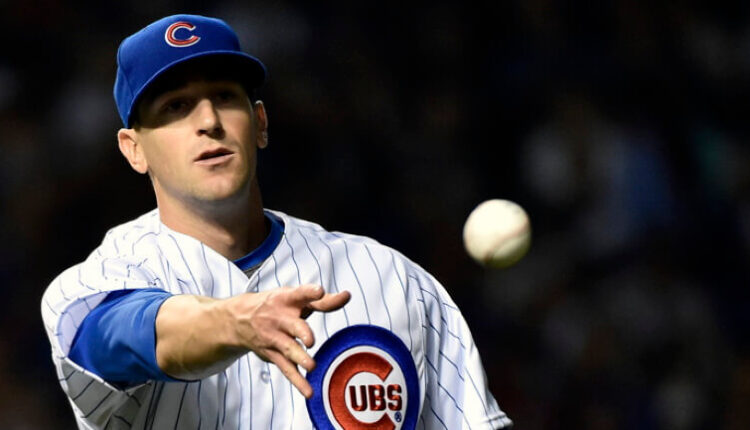 One player that ended up on a ton of my fantasy baseball squads in 2021 was Kyle Hendricks. Should we buy back in or sell and stay away? Hendricks pitched decently in the first half with a 3.77 ERA and 1.25 WHIP. However, he pitched awful with a 6.16 ERA and 1.49 WHIP in the second half. It’s safe to say that the Cubs trading away their entire core of players outside of Willson Contreras played a role in the fantasy demise.

A tricky aspect of fantasy baseball involves whether to buy or sell players that struggled last season. We’ll dive into what went wrong with Kyle Hendricks. Then look ahead to decide how we should value him in 2022 fantasy baseball redraft leagues. Check out the rest of my in-season and off-season fantasy baseball articles up on FantraxHQ.

One positive for Kyle Hendricks each year involved the ability to eat up innings with quality ratios. Although Hendricks tossed 181 innings, he finished with a career-worst 4.77 ERA and 1.35 WHIP. Hendricks finished with the worst strikeout rate (16.7%) since his rookie season in 2014 and lower than the career average of 20.2%. Meanwhile, the walk rate sat near the career 5.4% walk rate. It isn’t a recipe for success in allowing the most hits of Hendricks’ career (200) plus the low strikeout rate. Oddly, Hendricks matched the second-most wins in his career at 14 on a team that went 71-91. 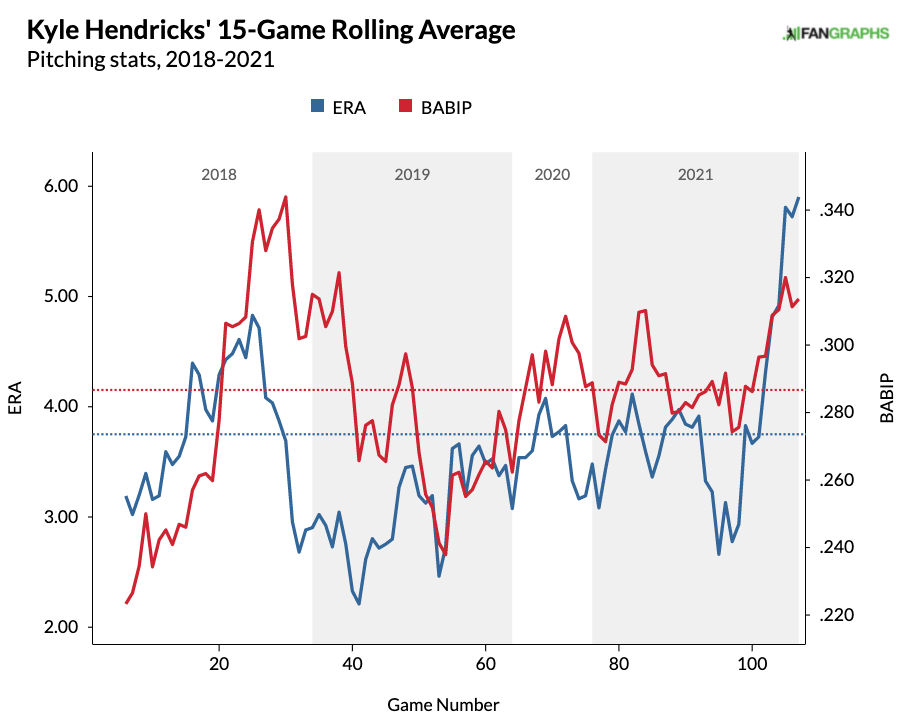 First and Second Half Splits

He has a straight change, & a circle change. Typically, he used the latter as his out pitch in previous years. Not sure if that changed in '21.

Credit to JayDub (@JayDubTheGamer) for noting that Hendricks uses two different changeups, but it doesn’t register that way on Baseball Savant or FanGraphs. Then friend and baseball writer Dave Swan (@davithius) sent me the FanGraphs article by Eno Sarris on the two changeups by Hendricks. Eno describes it quite well based on movement and velocity, and he refers to them as the Cut Change and Fade Change.

In a side conversation with @DynastyOneStop, he mentioned Kyle Hendricks' curveball usage aligning with Hendricks performing better.

Data backs that up with the first & second half splits in 2021. BABIP and LOB% regressed too. pic.twitter.com/W7emfIM5k7

In a side conversation with fellow FantraxHQ fantasy baseball writer and best commissioner Nathan Longfield (@DynastyOneStop), Nathan mentioned Hendricks performed better when he used the curveball more even though he relies on the fastball-changeup combination. The data backed that up too. 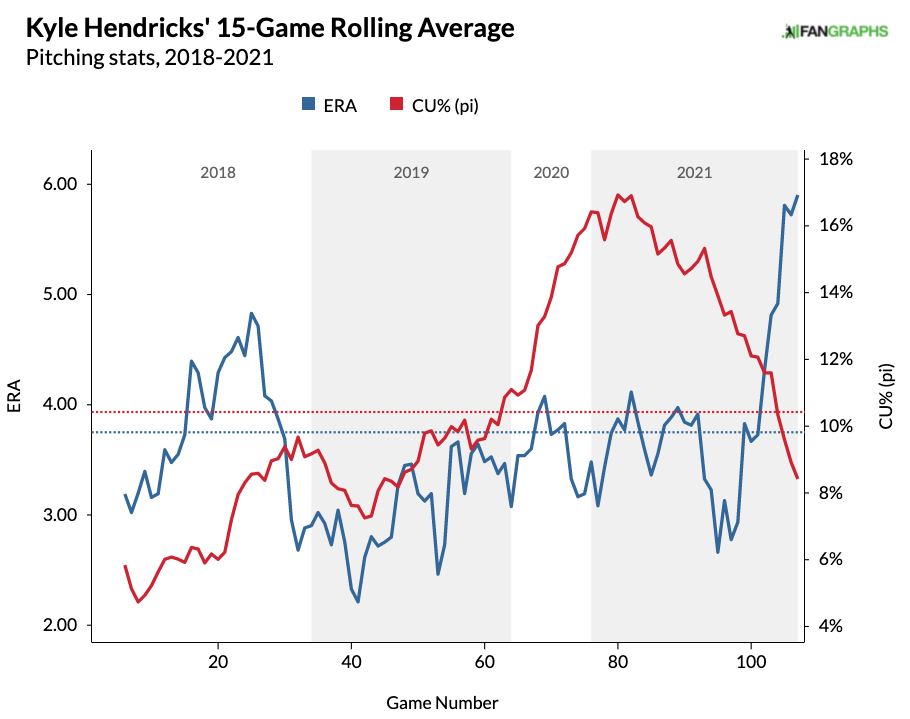 As one of the savviest pitchers in the league, let’s look at the pitch mix and results for Kyle Hendricks. He typically mixes up the sinker (42.7%), changeup (27.8%), four-seamer (17.8%), and curveball (11.7%). Interestingly, the velocity slightly increased compared to previous seasons, particularly 2019 and prior years. It’s not a significant velocity increase, but sometimes a pitcher’s velocity dips when a pitcher struggles. 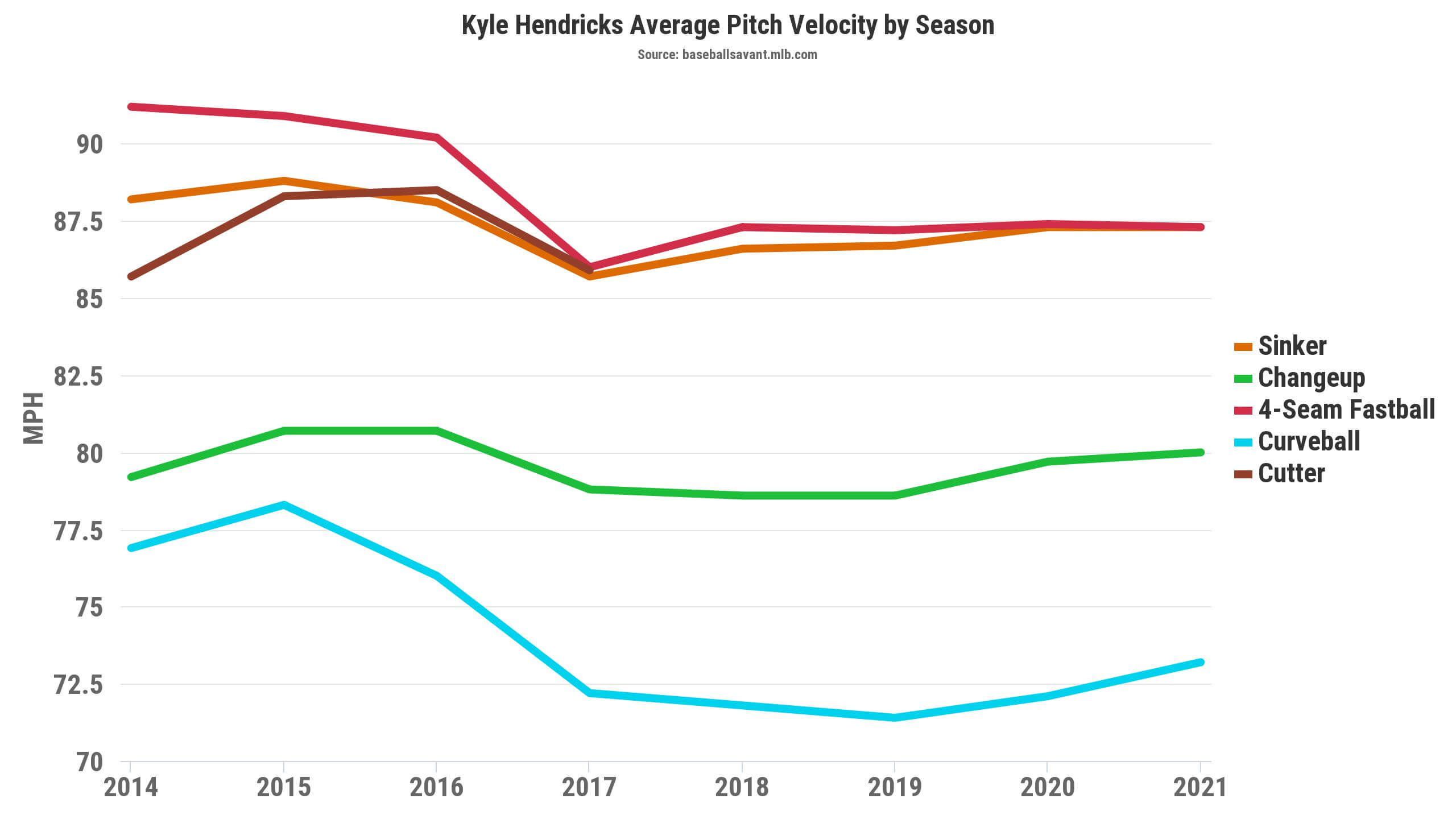 Hendricks typically uses the changeup as a weapon against lefties since he threw 497 of 780 against opposite-handed hitters. However, the whiff rate by zones indicates the same issues we’re noticing with the changeup and where he locates it. 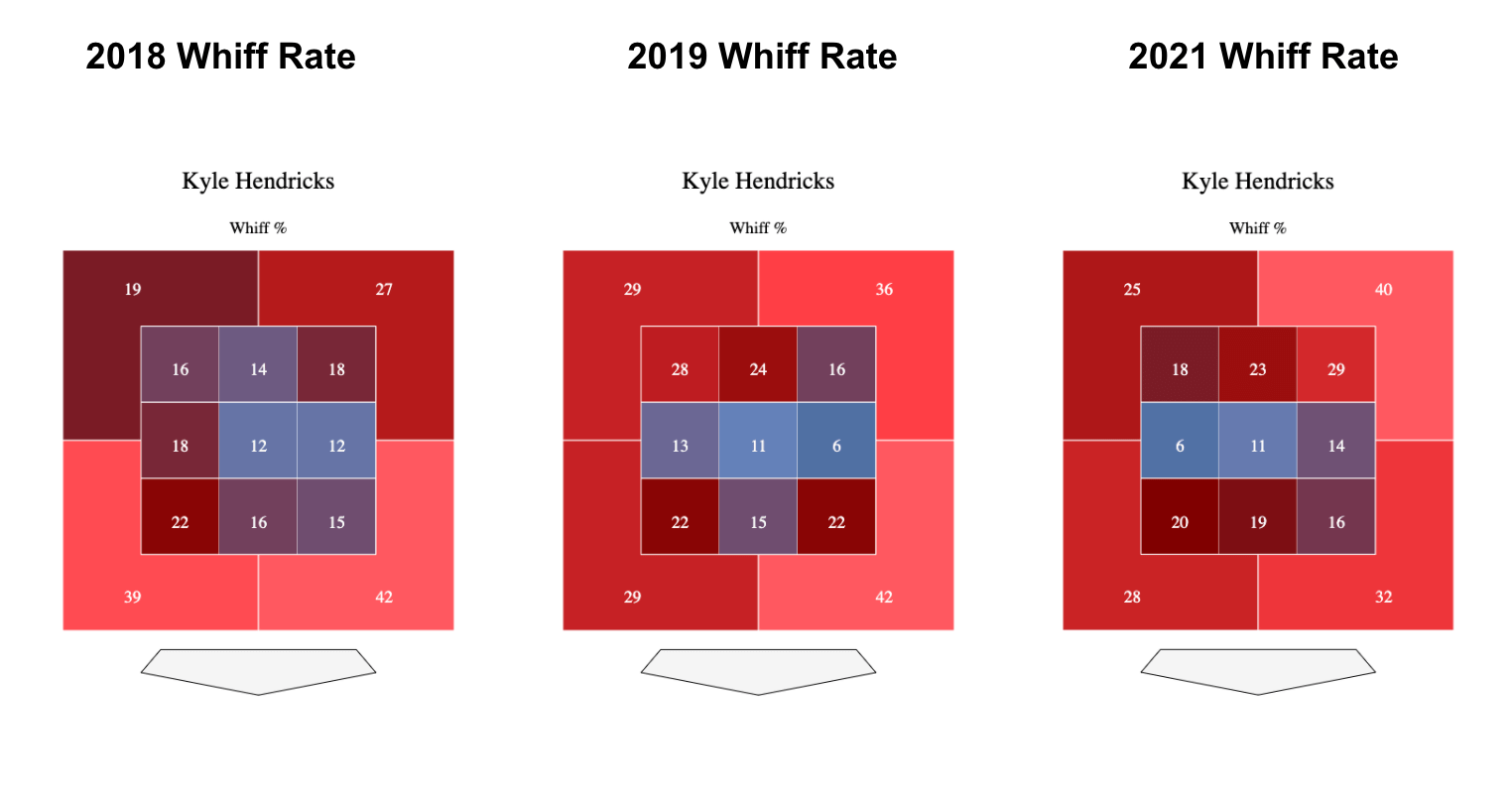 Hendricks consistently used the changeup in the arm-side corner low and away from lefties.

As a savvy pitcher that relies on control and command, Kyle Hendricks struggled in the heart of the zone compared to previous seasons. It’s the first time in the past four seasons where Hendricks finished with a positive Run-Value via the Statcast Swing Take leaderboards. That’s not a positive indicator for pitchers since we want negative Run-Values. 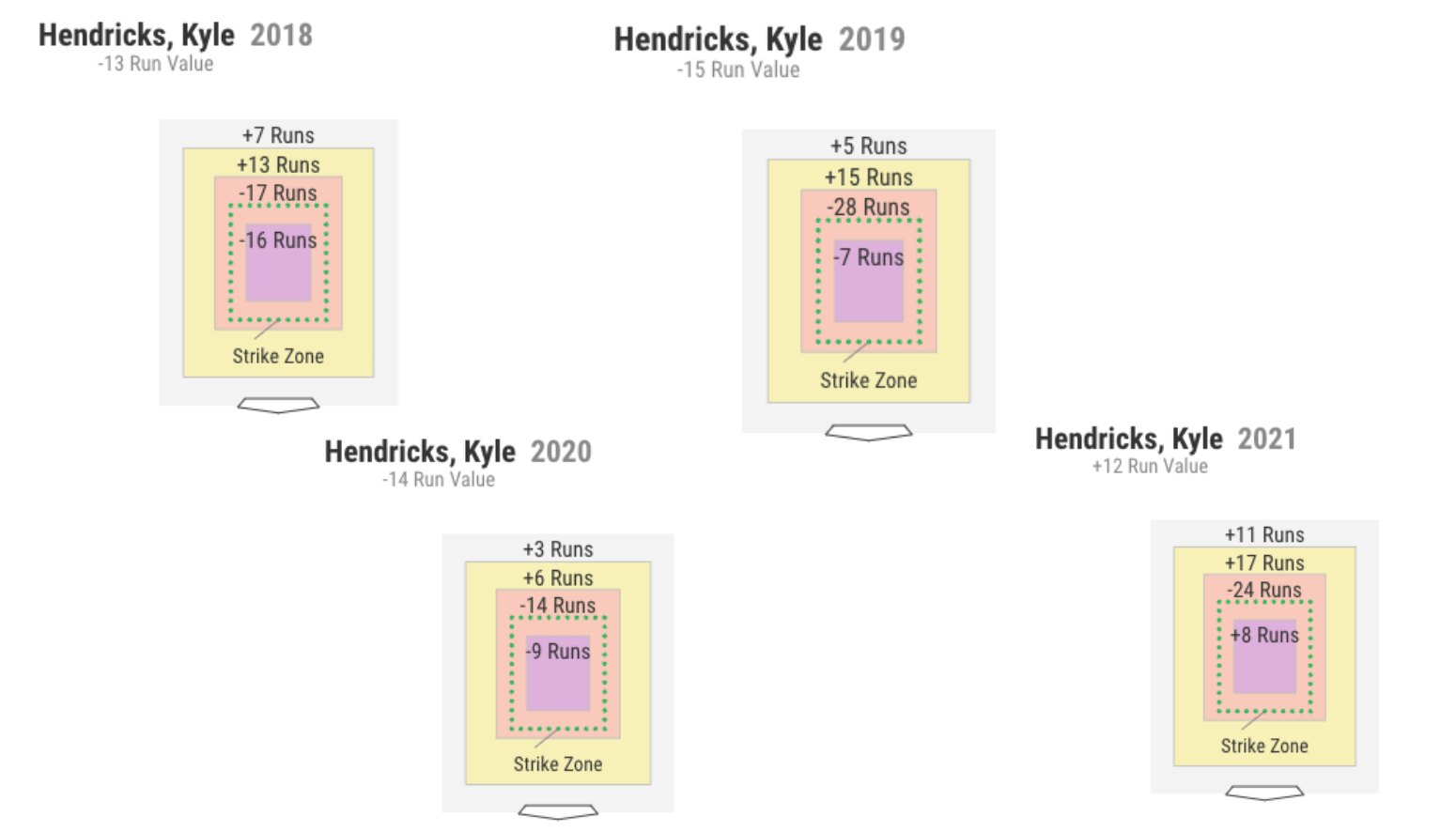 Since there’s a chance the 2021 season ended up as an outlier, Kyle Hendricks could bounce back as a pitcher to buy rather than sell in 2022.

Should We Buy or Sell Hendricks?

So, should we buy or sell Kyle Hendricks? Early STEAMER projections look gross with a 4.66 ERA, 1.35 WHIP, 17.6% strikeout rate, and 5.5% walk rate in 186 innings pitched. If we took away the name, most fantasy managers would stay away from a pitcher with those projections. However, the ongoing question involves buying into Hendricks’ track record versus the most recent terrible season.

As one of the most consistent starting pitchers for six straight seasons, it makes sense to buy more than sell. However, 2021 isn’t a tiny sample of struggles for Hendricks. We can at least point towards some explanation with the Cubs trading with their core major leaguers, changeup ineffectiveness, struggles in the heart of the zone, and decreased curveball usage. From a defensive standpoint, the Cubs lost a couple of their top infielders in Anthony Rizzo with an Outs Above Average in the 92nd-percentile and Javier Báez in the 82nd-percentile. 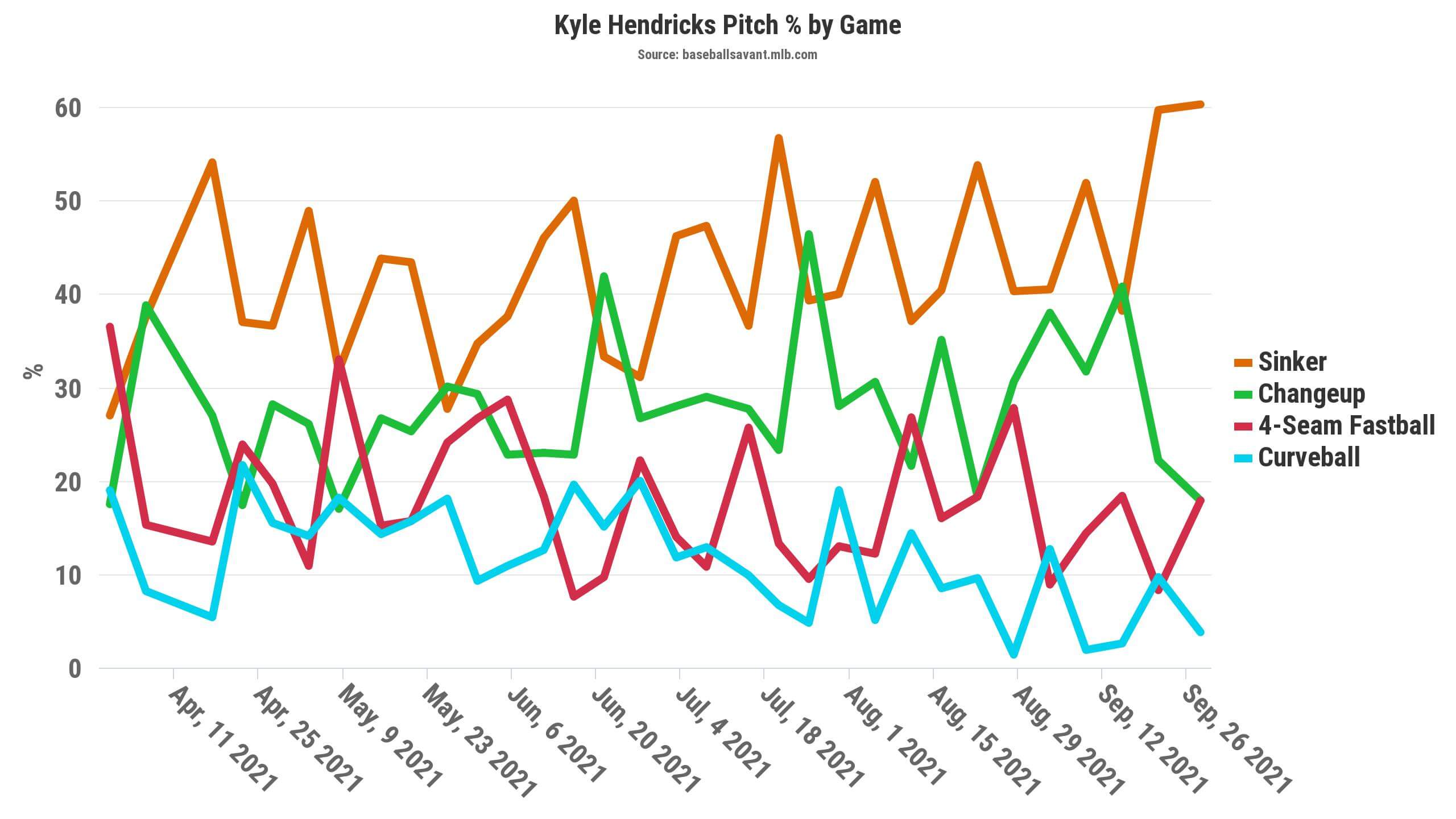 Even the curveball usage seems worth monitoring because the decreased usage coincided with the struggles and ineffectiveness with Hendricks. ADP matters, of course, and the early NFBC ADP for Hendricks sits at 236.6 in the draft and hold leagues. Depending on roster construction, buyback into Hendricks at that ADP. However, there’s a slim margin for error for a pitcher like Hendricks, so it’s understandable to proceed with caution.