6 Hitters to Buy-Low on Right Now 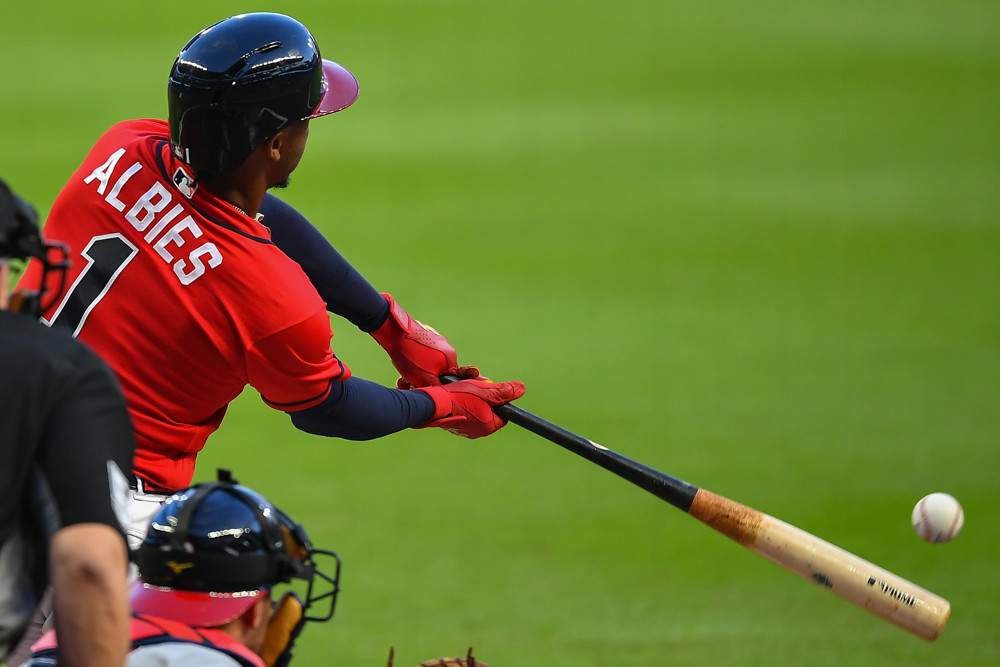 We live in an age where instant gratification is desired and immediate overreaction happens if the first is not achieved quickly. This is how life is these days, both in fantasy baseball and life in general. Patience is a lost art. Jeez, I feel like I’m giving life lessons to my children right now. In our fantasy baseball world, April serves as National Overreaction Month where everyone is wondering if they should be worried about (insert player here) or if they should cut bait for (Insert player that’s not nearly as good but is on a hot streak here). With all these questions and overreactions flying about, now is the perfect time to capitalize on that as a fantasy manager and try to acquire some slumping players on the cheap that should bounce back. That’s what I’m going to discuss today with five struggling buy-low hitters to target right now.

This one is easy. Ozzie Albies has been one of the unluckiest hitters in baseball this season. Out of the 172 qualified hitters this season, Albies has the 3rd lowest BABIP at .163. In general, Albies has actually been performing quite well and has improved in many areas when comparing to 2019. First and foremost, all of Albies expected stats are higher than they were in 2020 and most serve as current career-best marks.

See that .320 xBA? That ranks in the top 10% of the league. His xSLG, xwOBA, and xwOBACON also serve as career-best marks. Additionally, Albies is hitting the ball harder than he ever has with an 89.8mph average exit velocity, and 38.5% hard-hit rate.

Another area where Albies has improved thus far is in his plate approach. After seeing his strikeout rate rise to 24.2% last season and his SwStr% to 13.3%, Albies has dropped those back to his normal pre-2020 level around 16% and 11.5% respectively while pushing his walk rate to a career-best 9.6%.

Yup, Albies has simply been incredibly unlucky this season. If you want more proof of this, his contact rates have all improved in 2021. he’s just swinging a bit more than he did in 2020. Now is a great time to try and grab Albies for a discount via trade before he inevitably rights the ship when positive regression sets in.

Remember how I mentioned that Albies had the 3rd lowest BABIP in baseball so far? Well, Kyle Tucker has THE LOWEST BABIP in baseball right now at a meager .145. That atrocius BABIP has caused Tucker to post a .175/.200/.400 slash line so far despite having a lot of pink and red in his savant percentile sliders 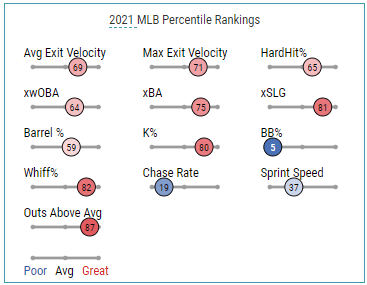 On top of that, Tucker has been even better in several departments this season when compared to his breakout in 2020. Tucker’s .283 xBA, .550 xSLG, and .357 xwOBA are all career-best marks at the moment and he’s cut his strikeout rate for a 2nd straight season.

With all that said, there are two areas that I’ll admit that I’m slightly concerned about. Tucker has never been a big walk rate guy, but he’s walking at a career-worst 2.4% mark so far this season. This makes sense when you see his swing metrics all higher than last season, showing that Tucker is being more aggressive this season in general. Tucker’s O-Swing rate has risen from 31.3% to 36.7%, his Z-Swing from 78.2% to 81.1%, and his swing rate from 50.5% to 56.3%.

This isn’t too concerning in general, but Tucker will need to find that balance between patience and aggressiveness. A 2.4% walk rate simply will not get it done. But at the same time, his contact metrics have all remained consistent with 2020 marks or even slightly improved, which is an encouraging sign.

The other area I’m slightly concerned about is Tucker’s 37th percentile spring speed and one stolen base attempt on the season. One of the reasons why Tucker has been as highly regarded as he has been was his ability to add 20+ steals annually. The sprint speed with Tucker has never been elite, but he was 72nd percentile in 2019 and 70th percentile last season. It remains to be seen if he turns things around in that department, but at the plate, I’m expecting Tucker to heat up in the near future. And when he does, good luck getting him for a discount via trade.

When the White Sox decided to keep Andrew Vaughn on the active roster to start the regular season, it was a pleasant surprise to those of us that had drafted him late in drafts this spring. But unfortunately, Vaughn’s manager is Tony La Russa who last managed when Albert Pujols was still a top-5 hitter in baseball during the first Presidential term of Barrack Obama. La Russa decided that giving his team’s top hitting prospect sporadic playing time was a good thing. News flash, it’s not. Especially when you’re starting guys like Nick Williams and Billy Hamilton. But now that Vaughn has started receiving regular playing time over the last week, he’s put together a five-game hitting streak (6/16).

Can we chill for a second? This is exactly what I was talking about in the intro. When looking at Vaughn’s savant page, you’ll see some blue in his metrics, but three that are encouraging are his 93rd percentile average exit velocity (94 mph), 86th percentile hard-hit rate (52%), and 82nd percentile walk rate (13.3%). So while his surface stats aren’t aesthetically pleasing, the fact that he’s hitting the ball very hard and showing patience is highly encouraging.

This is one of the best hitting prospects in baseball, folks. And one that is in a good lineup with a hitter-friendly home ball park. If the White Sox brass thought he didn’t belong at the Major-League level, they would’ve already optioned him to the alternate site. They didn’t, and now Vaughn is beginning to heat up as the playing time finally becomes more consistent.

Vaughn was likely dropped in a lot of 10 or 12-team leagues. If he was, I’d recommend picking him up right now. And if he wasn’t, you can likely acquire him via trade for a very reasonable cost. I still firmly believe that Vaughn will be a top-15 first baseman ROS.

Jorge Soler (OF – KC): The strikeout rate remains too high, but Jorge Soler is hitting the bleep out of the ball this season. Through his first 77 plate appearances, Soler has recorded a 96th percentile average exit velocity (95.3 mph), 97th percentile hard-hit rate (61.1%), 13.9% barrel rate, and a .518 xwOBACON. There’s nothing wrong with Soler’s quality of contact right now, but oddly enough, he only has two homers under his belt this season. Due to his contact rates and strikeout woes, the average will never be great, but Soler’s surface power numbers are bound to tick up with his underlying quality of contact metrics.

Charlie Blackmon: He might not be the elite asset that he once was, but Charlie Blackmon is still a very good hitter that gets to play half of his games in Coors Field. But unfortunately, Blackmon has been a tad unlucky this season. Entering Sunday, his BABIP sat at .170 after being between .315 and .371 in each of the last nine seasons. Blackmon has actually improved in several areas this season, posting a career-best walk rate thus far and his lowest strikeout rate since 2015. Many of Blackmon’s expected stats are much higher than his actual metrics thus far as well and he’s hitting the ball harder than he ever has. A lot of signs are pointing towards Blackmon getting it going sooner rather than later.

Nick Senzel (OF – CIN): While I’ve been vocal about my concerns surrounding Nick Senzel staying on the field consistently, the skills have not been an area of critique. Sure, he was overvalued and overhyped as a prospect, but the all-around offensive skillset here is still intriguing fantasy purposes. While Senzel’s power numbers aren’t jumping off the page, his xSLG (.507) is more than 200 points above his actual SLG right now along with having a .301 xBA, 94th percentile sprint speed, and career-best marks in exit velocity and hard-hit rate. Senzel also has improved both his walk rate and strikeout rate. Is he a star in the making? No. But there’s plenty of reasons to believe a turnaround is coming soon.