Bullpen Kings: The Growing Impact of Relievers in Fantasy

The term “ace” is unanimously associated with the elite of the elite starting pitchers in baseball. The term itself is often overused in analysis, but it quickly describes the status of a certain group of top-notch starting pitchers. Clayton Kershaw, Corey Kluber, Chris Sale, and Max Scherzer are all legit aces, and even some other emerging stud starters like Aaron Nola, Jose Berrios, and James Paxton could be considered aces in some circles. If the best of the best starting pitchers are aces, what do we call the growing crop of elite relievers? These are the relievers taking over baseball with their dominate ratios and eye-popping strikeout numbers. Why not call them “kings”? “Closer” is the traditional word we use to describe top-level relievers, but with more and more importance being placed on middle relievers and set up men, it no longer means what it used to. Often times, the best arm in a bullpen isn’t the closer. Take the Indians or Diamondbacks, for example. Andrew Miller and Archie Bradley clearly have the best bullpen statistics on their respective teams.

As time passes in today’s game of baseball, the use of relievers is evolving. Starters are being pulled earlier in the game, and reliever innings are increasing. From 1993 to 2015, relief pitcher innings were between 31-35% of the total innings pitched in baseball. In 2016, that number shot up to 37%, and then again increased to 38% last season. Earlier on (very early) this season, relievers are throwing a record-setting 41% of the total innings in games. This increase creates a compounding impact for fantasy teams. In years past, a much larger percentage of a fantasy owner’s strikeouts came from starters. That percentage is decreasing. Also, the fewer innings pitched by starters, the more weight in WHIP and ERA is carried by relievers. One illustration of this is the average innings pitched by games started since 1989. We have seen a drastic decline in innings per start since the 1990s, but even more so the last few years. 2017 was the first time where starters were throwing fewer than six innings per start on average (5.98 IP per start). This year, again, in a very small sample size, we are seeing starters at about 5.69 innings pitched per start. 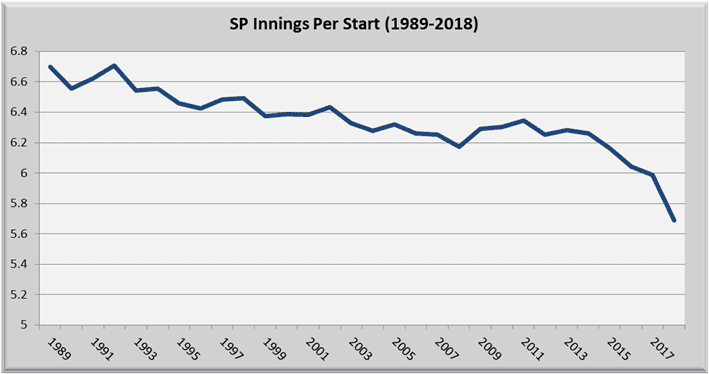 Last year in ESPN’s standard game where relief pitchers are mainly rostered for saves, Andrew Miller finished 148th overall with only two saves. Obviously, Miller may be the shining example of what we are looking for here, but every time we seem to turn around, another young reliever is being called up who throws triple digits and has absolutely overpowering stuff. Some of these pitchers are finding themselves in this late-inning flex role, which can now be extremely lucrative in today’s game. Here are a few of those pitchers who can contribute daily to strikeouts, solid ratios and may even sneak in the occasional save or win for your fantasy team.

Josh Hader, Milwaukee Brewers – Hader is an animal. He uses his 93 to 94 MPH four-seam as his primary pitch but leans on his devastating slider as a putaway offering. Hader made batters whiff on his slider about 23% of the time in 2017. This year, that particular pitch has a 27% whiff rate. For comparison sake, Chris Sale’s slider has been between 15-17% the last several years. Yeah, Hader’s stuff is really good. This year he already has 17 strikeouts in his 7.1 innings pitched. Definitely an unsustainable pace, but if Hader were to throw around 70 innings with that K/9, that would equal 170 strikeouts. For those keeping track at home, only 28 starting pitchers in 2017 had more than 170 strikeouts.

Dellin Betances, New York Yankees – The Yankees bullpen is a feeding ground for Bullpen Kings. Top to bottom, they probably have five relievers on the team that could make solid fantasy contributions, even in standard leagues. Given the choice, though, I’m going with Betances nine times out of 10. In a down year, Betances had the second highest K/9 among qualified relievers in 2017 with 15.2. Keep in mind his 2016 season, when he struck out 126 batters in just 73 innings. As an added bonus, Betances is next in line for saves on one of the best teams in the league. This is an easy pickup if he’s still available.

Jordan Hicks, St. Louis Cardinals – Hicks was a starting pitcher in the St. Louis farm system before this year, but he has seen all of this time in the bullpen so far this season. He has made six appearances, allowing just three hits and striking out five. The strikeouts haven’t quite been there yet, but considering he had solid strikeout numbers as a starter in the minors and his fastball can hit 100 mph, the strikeouts will come. The 21-year-old owns the Statcast fastest pitch leaderboard this season, with eight of the top 10 spots having his name next to it.