That’s right, I said it. Bryce Harper is an underrated fantasy baseball player. This isn’t my first time writing about Mr. Harper and assessing his value in our fantasy world, but after some comments I saw on Twitter regarding my ranking him as a top-20 dynasty player, I felt this piece was warranted. In fact, I think Harper’s game has transformed into one of the more underrated profiles in baseball and in fantasy baseball. And once people stop irrationally disliking him for his personality or the fact that he hasn’t performed at Mike Trout levels like expected, his great all-around fantasy profile will start receiving the high praise that it deserves.

I’m not saying people think Bryce Harper is a bad player, but the amount of skepticism for a top-20 dynasty ranking is puzzling to me. Is Harper brash and arrogant? Sure is. Has he caused some headaches over the last several years for the people rostering him in fantasy baseball leagues? Sure has. Trust me, I’ve rostered Harper in many leagues over the years including several dynasty or keeper leagues. I’ve lived through the Harper fantasy peaks and valleys just as much as anyone, so I understand the frustrations at times. But let’s look at the player Harper currently is, not what we hoped he’d become when he graced the cover of Sports Illustrated as “Baseball’s Chosen One” back when he was just 16 years old. The cover also questioned if he was the best sports prospect since LeBron James. 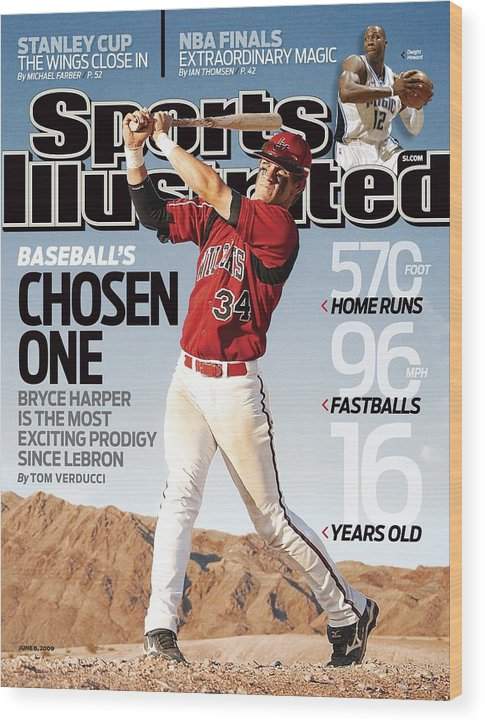 That’s an unbelievable amount of praise and pressure for anyone, let alone a sophomore in high school.

That back issue really hampered him for a few weeks in the middle of the season. After a 2/5 game on August 18th against Boston, Harper’s slash line sat as a drool-worthy .367/.486/.700. In the four weeks following that game, however, Harper struggled to the tune of a .163 average, plummeting his season line down to .243/.391/.461 after the Phillies game on September 16th. Luckily, Harper was able to rebound a bit over the last two weeks of the season, but one must wonder what his end of season stat line would’ve looked like if he didn’t have that rough four-week stretch.

Even with that slump, Harper still finished the 2020 season as a top-20 player with the downright sexy statcast sliders you see below. 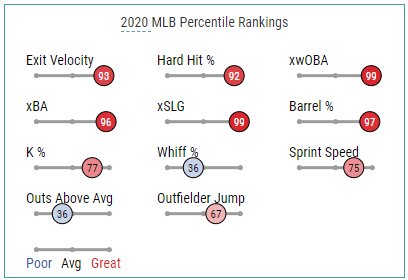 Damn, that’s a lot of red right there. Not many players have the skills to produce a 90th percentile or better rate in exit velocity, hard-hit %, xwOBA, xBA, xSLG, and barrel%, let alone while nursing a tender back. Was Harper likely to maintain that pre-slump slash line for the entire season? Probably not. But it was certainly plausible to see a slash line similar to his .330/.460/.649 line he produced in his 2015 NL MVP season.

One area of Bryce Harper’s game that has often been criticized was he propensity to strikeout. With how often I heard it mentioned, you’d think he struck out at Chris Davis levels or something. That’s far from the case. Entering the 2020 season, Harper had a career strikeout rate of 21.8%. Sure, that rose a tad to 24.3% in 2018 and 26.2% in 2019, but those are far from detrimental rates in today’s baseball landscape where the three true outcomes are much more prevalent than in year’s past.

While Harper’s strikeout rate was rising in 2018-2019, his walk rate was among the best in the league. Harper led the National League in walks with 130 for an 18.7% walk rate in 2018 and followed that up with a 14.5% rate in 2019. That made five straight seasons where Harper produced a 13.8% walk rate or better. In 2020, that streak extended to six as Harper exponentially improved his plate approach.

As noted in the above tweet, no player improved their BB-K% more from 2019 to 2020 than Harper did. And frankly, it wasn’t even close. Harper blew away the rest of the top-10 finishing 3.8% better than 2nd place Paul Goldschmidt. His already stellar walk rate rose to a career-best 20.1% with his 49 walks topping the National League for the 2nd time in three seasons, and Harper also trimmed his strikeout rate down to another career-best mark at 17.6%. Harper’s previous career-best strikeout rate was 18.7% back in 2016.

That’s not where the approach improvements end either. Harper also made minor improvements in his O-Swing%, O-Contact%, Z-Contact%, Contact%, and SwStr%, with all besides the O-Swing% serving as his highest marks since the 2017 season.

Harper also improved against breaking pitches which had been a major struggle of his over the last few seasons.

After batting below .200 against breaking pitches in both 2018 and 2019, Harper improved to a much more respectable .250 mark with an even better .303 xBA. In addition, Harper was able to cut his Whiff% against breakers down to 30.2% after hideous 39.8% and 49.5% marks in 2018 and 2019 respectively. Sure, his average against offspeed dropped from .248 in 2019 to .205 in 2020, but his xBA actually increased from .277 to .283. Seeing Harper make exponential improvements against a pitch he’s seen more than 25% of the time over the last three seasons is highly encouraging. It’s a small sample size, but definitely adds a bit of confidence around him entering the 2021 season. Keep it up, Bryce.

The approach wasn’t the only area of Bryce Harper’s game that improved in 2020 either. In 58 games, Harper smashed 13 home runs which equates to 36 over a full season. If he hadn’t been playing through a back injury, that pace likely would’ve been closer to his career-high 42 homer season he had back in his 2015 NL MVP campaign. Harper also posted the third-highest ISO of his career, trailing only the .319 mark from that aforementioned 2015 season and his .276 mark in 2017.

I’d recommend turning your sound on to hear the cannon-like crack of the bat along with the excitement in Don Orsillo’s voice. I’m pretty sure that homerun traveled all the way to Pluto.

That’s just the tip of the iceberg too. While he only has one 40-homer season to his credit, Harper has proven year in and year out that he is one of the top power bats in the game. 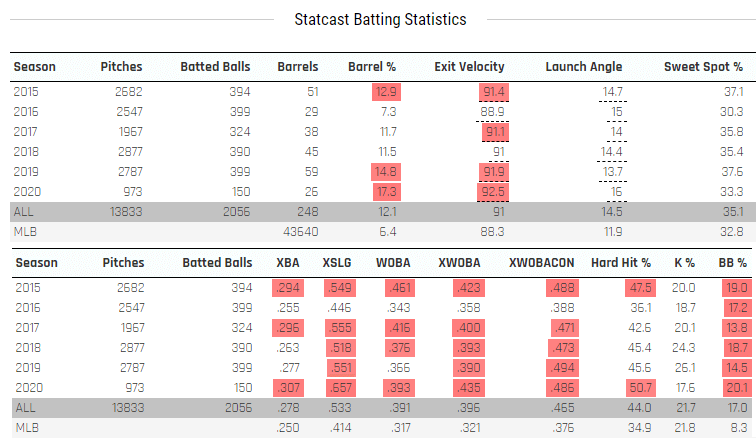 That’s a ton of red I see including three in the xBA column. If Harper didn’t have as patient an approach as he does, we’d probably have seen one or two more 40-homer seasons out of him. For qualified hitters over the last three seasons, Harper’s 16.01 AB/HR ratio ranks 19th best in baseball, sandwiched between Cody Bellinger and the almighty Juan Goato Soto. If you make the threshold an even one thousand at-bats, Harper would rank 13th.

Before we leave this power section, here are a few more encouraging metrics to point out. 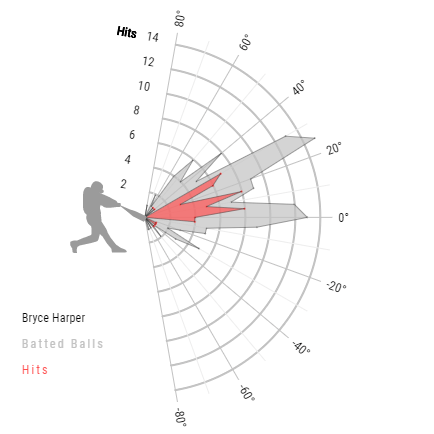 Harper is hitting the ball harder and elevating more than he ever has in his career. That’s a recipe for power success right there.

Do you remember when Bryce Harper was considered an injury risk with massive longterm durability questions due to his all-out style of play? Sure you do. Who doesn’t? Well, that’s not the case anymore. Over the last three seasons, Harper has missed only 10 games, playing in 374 of a possible 384 games. That’s tied for the 7th most games played since the start of the 2018 season, trailing only Freddie Freeman, Whit Merrifield, Cesar Hernandez, Carlos Santana, Manny Machado, and Paul Goldschmidt.

Harper basically told all his doubters to stick it where the sun don’t shine when it comes to his durability. We always talk about how good Aaron Judge or Giancarlo Stanton’s stats would look if they played a full season. That’s not something we’ve had to worry about or say with Harper in over three seasons now. And playing games is half the battle, right? You can’t accumulate stats for fantasy teams sitting on the bench or out on the Injured List. Blasphemy, I know!

Here’s a section that should give plenty of excitement to Bryce Harper truthers and turn some of his doubters if the above didn’t already. The below are Harper’s ranks over a wide array of metrics that cover approach, power, etc.

Not only do the Bryce Harper ranks above look damn impressive, but he’s also in a very rare club. Yes, this is a club I made up with personally set statistical thresholds, but it just shows how impressive Harper has been over the last few seasons. The below players are part of the 70-homer/25-steal club since the start of the 2018 season.

Only 11 players have gained passaged into this exclusive club that only I knew about until you and others read this article. These 11 players have been early-round talents for us in the fantasy world, many of which have been in the first round and will be again in 2021. But there’s an even more exclusive club that Mr. Harper is a member of. This is the 70-homer/25-steal/240-run/240-RBI club. This rarest of clubs covers four of the five major categories and is extremely hard to become a member of. So, without further ado, here are the members of the 70/25/240/240 club.

That’s it. Just Harper. We’ll now take a quick break and provide a live look at Harper searching for some friends in this illustrious club.

Poor Bryce. All alone with no buddies to hang out with. Is this starting to change the minds of Harper haters? I sure hope so. Over the last three seasons, Harper has a 162-game pace of 36 home runs, 107 RBI, 105 runs scored, and 16 stolen bases. What else do you want the man to do?

Listen, I’m not saying Bryce Harper should be taken as a top-5 pick or doesn’t have flaws. But what I am saying, is that Harper is very much deserving of the top-20 dynasty ranking that I gave him in my latest update and needs to be considered as a back-end first-round pick in 2021 drafts. If you play in OBP formats or one that adds walks, Harper is a no-doubt first-round selection and a borderline top-10 overall dynasty asset. Let the distant past be what it is and start appreciating Harper as the well-rounded fantasy stud that he is today. Oh yeah, he’s still only 28 for the entire 2021 season. We should have several more years of peak Harper studliness.