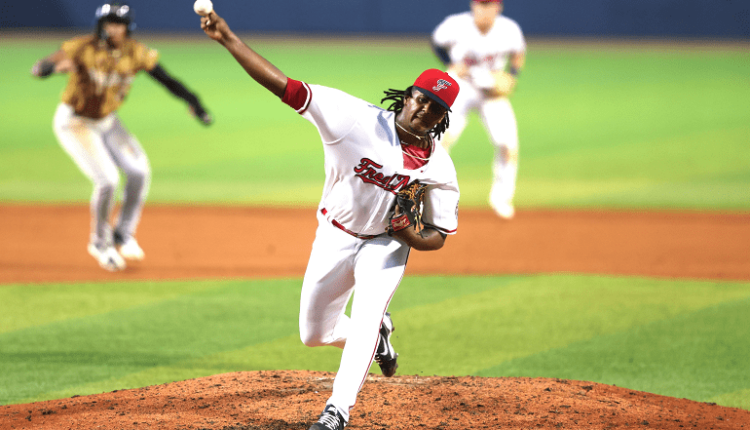 Throughout the entire 2022-23 offseason, Chris Clegg and I are ranking our Top 20 dynasty prospects for each organization. We’ll also be providing our breakout prospects in each division, picking one per team. Let’s begin with the National League Easy.

There aren’t many exciting breakout names in this Atlanta Braves organization right now, but one to definitely keep an eye on is Ignacio Alvarez. The Braves drafted Alvarez in the 5th round of the 2022 draft and he immediately impressed upon entering the Atlanta organization and getting into game action.

While the power wasn’t immediately on display, Alvarez hit .287 with a .451 OBP, eight steals, and nearly double as many walks (26) as strikeouts (15). This after an impressive JuCo performance in the spring that vaulted him up draft boards this past summer. And while the power lacked initially, many reports I’ve read on him believe there’s more power coming, such as Brian Sakowski from Perfect Game below. 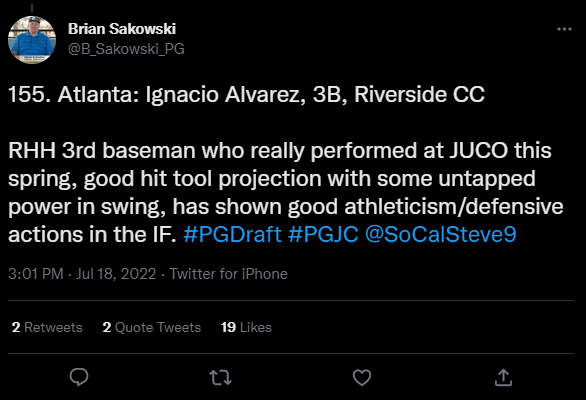 After Alvarez popped up on my radar his year, I dug a bit deeper into him and became more and more impressed. Many reports have been positive that I found, and Alvarez has a quick swing and seems to be able to generate some loft.

This is more of your lottery ticket addition for dynasty leagues, but I do believe we could see Alvarez make his way much higher in my top 400 in 2023. How high? I’m not entirely sure. But he’s definitely a fun name to keep an eye on or take a flier on in deeper dynasty leagues.

Another Name to Monitor/Target: Douglas Glod (OF)

The Marlins have been lauded for their pitching prospect development over the last few years, but I believe they have a big-time breakout-hitting prospect ready to burst out in 2023. That man is Jose Gerardo. Signed last period out of the Dominican Republic, Gerardo is a 6’1 outfielder that posted some impressive numbers in the Dominican Summer League this past season. In 218 plate appearances, Gerardo racked up 12 doubles, 11 home runs, and 18 steals with a .284/.417/.551 slash line. The approach is aggressive at the moment, as evident by his 30.3 strikeout rate, but Gerardo also drew walks at a solid 15.1% rate as well.

This was Jośe Gerardo’s 9th homer of the DSL #Marlins season. 17 year old who is already putting up some nice numbers. pic.twitter.com/KPYbsi62T8

With Gerardo, the hit tool is the aspect of his offensive profile that receives the most questions. There’s no doubting his strength and athleticism, or his cannon on an arm from the outfield. Gerardo has already put that strength and athleticism on full display during his first professional season, and he still has projection left on his frame to add additional quality bulk. In time, we could be looking at a 60-hit, 55-speed outfielder if he’s able to make strides with his pitch recognition and as a pure hitter. If he begins making those strides in 2023, it wouldn’t shock me to see Gerardo’s name within my top 50 overall by the end of 2023.

Another Name to Monitor/Target: Antony Peguero (OF)

If we hop in our time machine and go back a year or two, many, myself included, thought it was going to be Mick Abel being ranked where Andrew Painter currently is. That’s not to say that Abel has been bad in his two seasons, but it hasn’t quite been the level of dominance statistically that you’d expect from someone with his stuff.

At this point in time, a bit of prospect fatigue seems to be entering the picture when it comes to Abel in dynasty leagues. He’s still a back-end top-100 prospect for me right now, but the upside remains to vault much higher in 2023. Don’t let the last two seasons lead you to believe that this isn’t an elite arm talent. Because he 100% is.

Abel sits in the mid 90’s with his fastball, touching higher with a relatively flat vertical approach angle. He’ll sometimes even turn that over into more of a 2-seamer with slightly lower velocity, and will mix in a plus slider and a changeup that has the potential to be an above-average offering as well. Abel just needs to continue refining his pitches and strike-throwing ability, which should help him find more consistency and yield better results. While everyone is going gaga over Painter (as they should), now is your time to swoop in and grab Abel for a discount.

Matt Allan was my pick for this organization last season so why not go back to this well again this year? Without question, Allan is the riskiest name on this list. However, he also might represent the best price-to-ROI ratio on this list as well.

After being taken in the 3rd round of the 2019 draft, Allan quickly showed that the Mets got a steal with that selection. The loud stuff was apparent from the get-go and Allan began flying up prospect lists in 2020 after only 10.1 innings in 2019 and an impressive showing in fall instructs.

But the big problem here is that Allan’s career innings pitched total still sits at 10.1 innings. After missing the 2020 season due to the Covid shutdown, Allan then was forced to undergo Tommy John surgery and a subsequent follow-up procedure. But don’t worry too much about the follow-up procedure. It’s the same procedure that Jacob deGrom had to have many years ago, he just didn’t have it so shortly after TJS.

As for the stuff, we unfortunately have zero idea what he’s going to look like when he finally (hopefully) gets back into game action this upcoming spring. But before the layoff and injuries, Allan displayed an electric three-pitch mix of a mid-90s fastball, big curveball, and fading changeup. At this point, the upside and potential ROI compared to probably cost makes Allan very intriguing in dynasty formats.

While he was one of the lesser-known names in the Juan Soto return at the time, Jarlin Susana has the upside to become a household prospect name in even the shallower dynasty leagues. The big 6’6 right-hander tossed 45 innings this season between Complex Level and Lo-A, compiling a stellar 2.40 ERA, 1.07 WHIP, and a 36.9% strikeout rate. There was a bit of wildness as well, but an 11.2% walk rate for an 18-year-old in his first professional season is hardly what I’d consider worrisome.

Outside of his frame, the first thing that sticks out when watching Susana pitch is his electric fastball. As you can see above, he’s hit as high as 103 mph, can tough triple-digits regularly, and will sit in the upper 90’s. This is from a fairly clean and smooth delivery as well without much effort. Outside of the heater, Susana will mix in a low-90s changeup and a slider that often will sit in the low-90s as well. The changeup still needs refinement, but the slider is a filthy breaker with tight, late break. It’s a big swing-and-miss offering already and Susana can miss bats with his fastball as well.

In addition to his bat-missing ability, Susana recorded a 50% groundball rate in 2022 which is certainly encouraging. If he can continue to refine his changeup and overall command, Susana strong rise could turn meteoric in 2023. Don’t be surprised to see him well within many top 100 overall prospect lists by this time next year, maybe even my mid-season.

Another Name to Monitor/Target: Jeremy De La Rosa (OF)