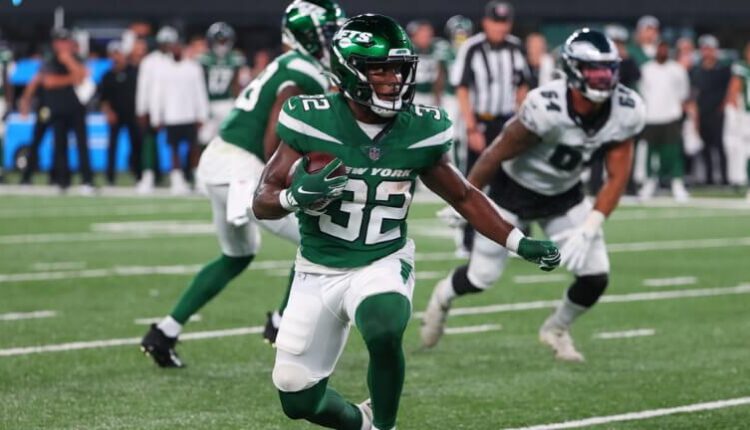 There are now three games behind us already for Week 12. Following Thanksgiving Day football, players from the six teams that took the field yesterday are no longer available to fantasy football managers. Given the increase in action on Thursday, managers have more information to base Sunday start/sit decisions on. If you find yourself in need of a boost given the outlook of your matchup, let our weekly bold predictions assist you in getting a much needed victory in Week 12.

Colin’s Breakdown: Consider this bold prediction for Week 12 an extension of my Love/Hate column. If I knew Jets quarterback, Zach Wilson, was going to get benched, when writing that column, Michael Carter would have led the way on the Love List. Instead, I’m making it a point to mention him here because my bold prediction is that he has his best fantasy performance of the season in Week 12.

Mike White is set to start under center for New York this Sunday. With a winnable home game versus the Chicago Bears on tap, I’m happy to see White get the chance to get a win. In three starts last season, White averaged 286 passing yards on an average of 40 pass attempts per game. More importantly, in those three starts, Michael Carter averaged just under 24 opportunities (carries + targets) per game. That includes nearly 10 targets per game.

The Bears are allowing the fourth-most points to running backs this season. Most of that is from rushing production, so James Robinson should have an okay day, as well. However, I think with the quarterback change, Carter’s familiarity with the quarterback, and his reputation with the Jets coaching staff that he is the running back to start from New York this Sunday. I’m starting Carter with the bold prediction he easily finishes in the top-10 at the position.

Lauren’s Breakdown: If you’re looking for a big-play threat this week, look no further than Jahan Dotson.  Dotson has a smash matchup against the Atlanta Falcons who have allowed the most receptions, targets, and receiving yards to wideouts this season.  They’ve also surrendered 13 touchdowns to the position, tied for second-most.  Dotson has a prime opportunity to make some noise in Week 12.

Dotson has two games under his belt since returning from a hamstring injury he suffered in Week 4.  The production hasn’t been great – he combined for two receptions, 27 receiving yards, and zero touchdowns – but his playing time has steadily increased.  It’s also worth noting that Dotson faced Philadelphia and Houston in those matchups.  Both defenses are top-eight against wide receivers, with Houston allowing the fewest receptions to the position.

Dotson doesn’t need many targets to make an impact.  He scored four touchdowns in his first four games of the season.  In every game Dotson found the end zone, he saw five or fewer targets.  The Falcons are the second-leakiest unit against wide receivers and Dotson should have no trouble scoring this week.  For my bold prediction, I expect Dotson to find paydirt for the first time since Week 4.

Bradlee’s Breakdown: Sherfield is a player that’s rostered in less than 1% of leagues right now. Probably rightfully so, but he continues to heat up as of late. The Miami Dolphins are 13-point favorites vs. the Texans this week. If they give Houston a beat down like that, it’ll be doing what they do best: Throwing the ball.

Waddle and Hill have been a two-man show for most of the season, but the way Tua has been playing, there’s enough love to go around. In the past four games, Sherfield has 13 targets, 159 yards, and one touchdown. That touchdown is from his most recent game, too. He’s trending in the right direction, and frankly, if I told you that you could have the WR3 for an MVP candidate QB (off of the waiver wire), you’d say I was crazy. He’s not a sure thing by any stretch, and this a one of my bolder predictions, but he’s in the right position to hit a home run in Week 12.

Michael’s Breakdown: When White has had his opportunities, he looks efficient, something Leonard Fournette has struggled to be this season. When Fournette exited in their last game, White took over with 22 carries and 105 yards. I expect White to win the split this week against the Browns.

The Browns’ defense is second-worst when it comes to fantasy points given up to running backs. So even if Fournette plays, White will still have his opportunities. He has shown he is efficient with them and going against this defense, he will have a field day. My bold prediction is another 100-yard day from White, but this time, adding a touchdown.

Reese’s Breakdown: This season has been a whirlwind for Latavius Murray. He started the season without a team, bursting onto the scene, scoring a pair of touchdowns for the Saints in relief duty. Then, an injury to Javonte Williams forced the Broncos to try their hand with the savvy veteran.

Murray hasn’t disappointed. Upon arrival, it was clear that the Broncos were willing to roll with Murray over Melvin Gordon. Odd, considering the latter’s familiarity with the scheme and system. Nonetheless, this backfield belongs to Murray now. Melvin Gordon is a free agent following his release. Additionally, Chase Edmonds is now on the Injured Reserve with a high ankle sprain. So, for the next four weeks at least, Murray will be afforded as much work as he can handle.

Murray is coming off a decent performance in which he ran the ball 17 times for 49 yards and one touchdown. Murray commanded a 50% snap count last week. We should see that number climb into the 80’s making him an intriguing volume-based play when the Broncos take on the lowly Panthers this week. With a heavy dose of volume, my bold prediction is a season-high in fantasy points when he gets into the end zone twice on Sunday.