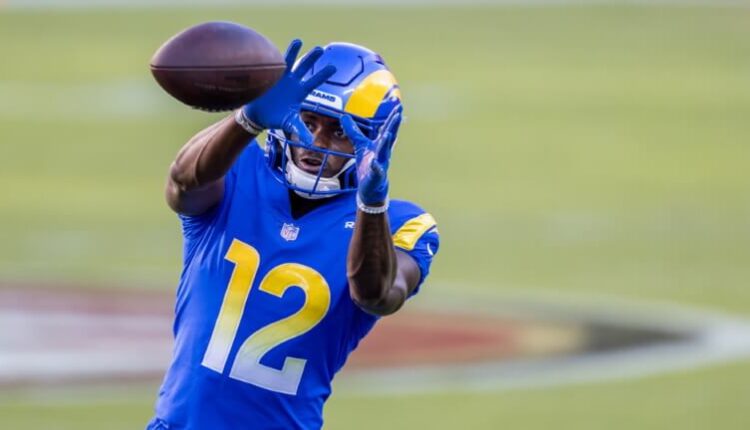 Week 9 was a dream for those who love to make bold predictions. James Conner scored 40.3 fantasy points at running back and rookies Elijah Moore and Pat Freiermuth finished as the top wide receiver and tight end respectively. That’s just scratching the surface of a wild week in fantasy football.

Our Fantrax staff writers made a few good calls of their own of players to have in your lineup in such a crazy week. Now, we move on to Week 10 and try to do it again. The fantasy football playoffs are right around the corner. If you need to roll the dice and cash in on a bold prediction to make a playoff push, look no further.

Colin’s Breakdown: At first glance, the rushing line I have here for McKissic leaves something to be desired. I’m not expecting much from the Washington Football Team run game against the Tampa Bay Buccaneers defense. I know Washington is coming off of their bye, but the Bucs run defense is one of the best in the league.

On the other side, given that Washington allows the most passing yards per game, and they’re set to face the MVP front-runner in Tom Brady, I expect the Football Team to be playing from behind most of this game. That should provide an opportunity for McKissic to get heavily involved as a pass catcher.

McKissic, even having had his bye, is still the seventh-most targeted running back this season. In his last three games, he’s averaged eight targets per game. The Buccaneers’ defense allows the fifth-most number of receptions to opposing running backs, likely because teams have so much difficulty running against them. My bold prediction is that McKissic records his highest reception total of the season and finds the end zone. Sure, he doesn’t crack the top-100 players in the Fantrax rest of season rankings. However, Week 10 will be his best fantasy performance of the season yet.

Mike’s Breakdown: This is probably the biggest bold prediction of the week. Bryan Edwards saw four targets in Week 9 and did not record a single reception. That’s 0.0 fantasy points for those keeping score at home. So, to have a bold prediction with the expectation of 20+ points should turn some heads.

I have Edwards going off this week in a pivotal AFC West showdown when the Kansas City Chiefs travel to Las Vegas. The Chiefs are allowing over 25 points per game. Especially if Mahomes and that offense start clicking Sunday, I expect the Raiders to throw the ball to keep up.

Prior to two low-scoring wins against the Giants and Packers the last two weeks, the Chiefs have allowed seven different wide receivers to score at least 19 fantasy points in six of the first seven weeks of the season. The includes players such as Marquis Brown, Mike Williams, Devonta Smith, Emmanuel Sanders, and AJ Brown. I boldly predict, but fully expect, Bryan Edwards to be the next player added to this list on Sunday.

Ahaan’s Breakdown: The Rams just played on national television when they got demolished by the Tennessee Titans’ on Week 9 Sunday Night Football. In that game, several Rams put up relatively disappointing fantasy performances for the standard they have built for themselves in 2021. However, Van Jefferson’s volume remains a bright spot and an underrated fantasy storyline headed into Week 10.

The Rams get to bounce back against the 49ers, who rank a weak #25 in pass DVOA but a stellar #6 in rush DVOA as a defense. Tack on the fact that this could be a heavily competitive divisional matchup and the Rams will likely be heavy in the passing game. Over the last three weeks, only three wide receivers in the NFL have more red-zone targets than Van Jefferson (two of which are his teammates, Cooper Kupp and Robert Woods). Jefferson can win you a matchup in your starting lineup on Monday Night Football. I’m calling a fantasy showing that features him nearly matching season-highs in receptions and yards while also finding the end zone. This bold prediction won’t let you down in Week 10.

Lauren’s Breakdown: Marvin Jones Jr. hasn’t exactly set the fantasy football world on fire this season.  In fact, since Week 2, he only has two games with more than 40 receiving yards, to go along with one touchdown.  Yuck.  But, I think Jones has a prime opportunity to produce this week in a juicy matchup against the Colts.

The Colts defense has recently struggled, with both the Titans and Jets scoring at least 30 points on them in consecutive weeks.  Additionally, they’ve allowed a league-leading 15 receiving touchdowns to wideouts this season, as well as the fifth-most fantasy points to the position.  Yes, both Jamal Agnew and Dan Arnold have out-targeted Jones in the past two weeks.  But, we’re here for bold predictions, and I think this is the week the veteran steps up and shines.

Mick’s Breakdown: While much of the chatter surrounding the Kansas City Chiefs has revolved around their offense, their defense continues to have its issues containing running back production. Last week, the combination of Aaron Jones and AJ Dillon turned 26 opportunities into 143 yards, albeit without a score. Kansas City ranks in the bottom-10 in the NFL in terms of receptions and receiving yards allowed to opposing running backs this year. This is where Kenyan Drake has made most of his noise this season, and where I expect him to do so on Sunday.

Drake had six catches for 70 yards last week. It was his third game this year with at least five catches and 40 receiving yards. For reference, that’s three more than Allen Robinson has. Las Vegas would be wise to continue to highlight Drake as a pass-catcher, particularly in this matchup. If they do, Drake is a solid RB2/Flex option. And if he scores a touchdown, we’re looking at an RB1 for Week 10. My bold prediction suggests the latter.