No Gray Area: These Starters Are Due For BABIP Regression 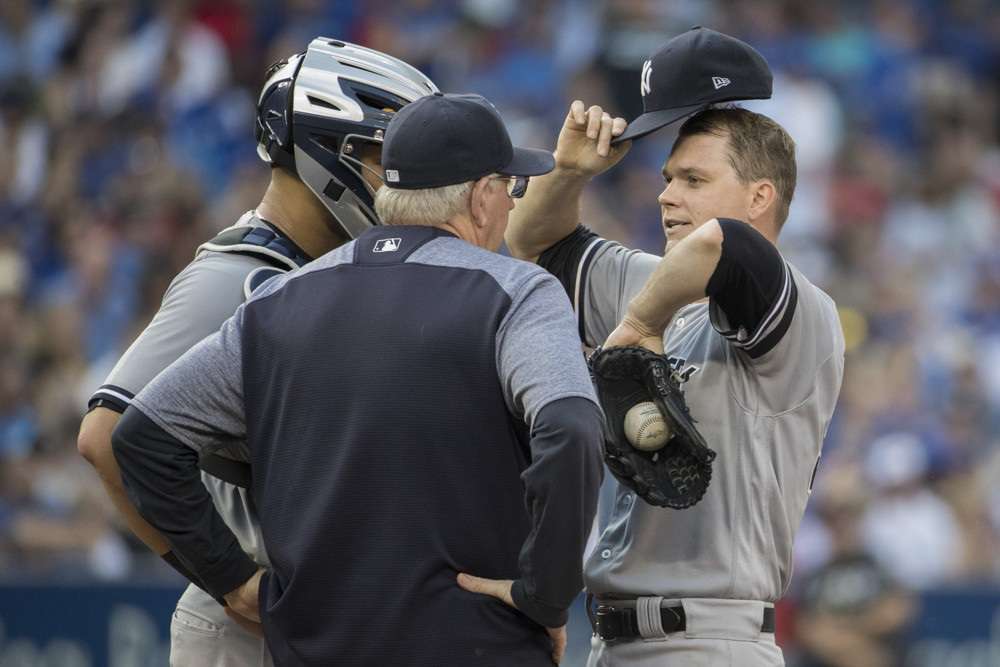 The weather may have been scorching hot throughout much of North America this weekend, but it was a gray weekend for pitching. Much of the discussion over the last few days has centered around the pitching Grays, Jon and Sonny. After giving up five runs to the Giants last Thursday and failing to pitch as many as six innings for the sixth time in his last nine starts, the Rockies sent Jon Gray to Triple-A Albuquerque on Saturday. Sonny Gray still has a spot in the Yankees’ rotation, but he earned the consternation of fantasy owners and Yankee fans by giving up six runs to the Red Sox over just 2.1 innings. Today we’ll try to figure out if BABIP regression can help these pitchers and the Fantasy owners who roster them.

While both Grays had a bad weekend, Jon at least got some support from the Twitterverse. Many observers took note of Jon’s 2.80 xFIP, which is nearly three runs below his ERA (5.77) and is the seventh-lowest mark among qualified starters. Few seemed to be cutting Sonny a similar amount of slack.

As Jim Bay noted in Monday’s MLB News piece, Jon had not been getting good results with his fastball. He had been having much more success with his slider and curveball, but he had been allowing hits on balls in play at much higher rates with all three pitches than he had last year. Jon’s xFIP did not reflect his .386 BABIP, but there are good reasons to expect that it won’t regress enough to make him a useful fantasy pitcher. He was inducing soft contact a mere 15.3 percent rate (as compared to 22.7 percent last season), as he was getting the easiest types of outs — dribblers and popups — at rates below the major league average. Coors Field already put Jon at a disadvantage, as it has the highest BABIP rate of any park this season, but unless he gets better at coaxing soft contact, he won’t have notably better results when he gets promoted.

However, Sonny has a brighter future. So do a couple of members of the Phillies’ rotation who have produced doubts in the minds of fantasy owners. The keys to their turnarounds lie in BABIP regression and a likelihood that they are almost certain to improve.

Sonny’s 5.44 ERA is nearly two runs higher than his 2017 mark (3.55), yet his peripheral stats suggest that he is largely the same pitcher, particularly over the last two months. There is no way to put a good face on his first five starts of 2018, but in his subsequent 11 starts, he has posted strikeout (20.8 percent) and walk rates (7.7 percent) that are right in line with his stats from the previous four seasons. Particularly for a pitcher in the AL East, Sonny has been stingy with homers all season long, compiling a 1.1 HR/9 ratio. Despite what his detractors have been tweeting (or for that matter, what Sonny himself has been saying), there has been much to like from the former Athletic.

“I feel like we’re the best team in baseball four out of five days and then I come out there.” – Sonny Gray.

“I’ve been bad against multiple teams.”

The biggest difference between Sonny’s 2017 and 2018 is his BABIP. Whereas last season, it was a svelte .269, so far this year, it has ballooned to .321. He has allowed fewer grounders and more hard drives, but even so, his xBABIP is a normal .300. His dribbler rate of 28.1 percent is still nearly four percentage points above the major league average (24.5 percent).

Heading into this season, Sonny had been better than average on balls in play with a .277 career BABIP. His long-term track record suggests he could be above-average again on balls in play, and as long as he continues to induce dribblers and limit home runs at his current rate, he should be a useful pitcher in 12-team mixed leagues over the rest of this season.

It was not so long ago that we were talking about what a great season Pivetta was having. I touted him in this very space in late April, and he pulled into June with a 3.26 ERA and .274 wOBA allowed. June was less kind to the 25-year-old.

Some Phillies pitchers happy June is gone. Some not

Pivetta had only one good start in the month, but it was a really good one, as he held the Cardinals to two runs over 7.1 innings with 13 strikeouts. Three of the six starts were absolute clunkers: a four-inning start against the Giants, a six-runs-in-five innings effort versus the Rockies, and his utter meltdown last Friday against the Nationals (seven runs, three home runs, 1.2 innings). Pivetta moderated his flyball tendencies with a 47.5 percent ground ball rate, but the airborne contact he allowed was hard, and he gave up eight home runs over 28 innings on the month.

Fantasy owners should avoid Pivetta until he can slow the deluge of homers, and the first two months of the season showed he is capable of doing that over an extended stretch. The first third of the season also showed that Pivetta can be a normal pitcher in terms of BABIP, as he posted a .303 mark that was supported by a 27.3 percent hard contact rate. In June, Pivetta allowed opponents to bat .330 overall and .423 on balls in play, but his xAvg was just .214. His home run problem is a serious one, but at least he has only one problem to solve. There is nothing wrong with Pivetta’s ability to limit hits on balls that actually stay in play.

Velasquez has been dropped in nearly 2 percent of leagues on Fantrax in the past week, and much of his loss in popularity is likely due to his placement on the 10-day disabled list with a right forearm contusion. Frankly, he should be getting added for the way he threw out Adam Eaton with his left arm after he absorbed a line drive with his now-contused right forearm.

.@vjvelasquezrhp got struck with a line drive on his right arm, so he made the play with his left.

He would leave the game, but not before getting the out. pic.twitter.com/V3xR4M7ult

In any event, Velasquez’s stay on the DL could be a short one, and there are reasons to eagerly anticipate his return. Though he is less than a month removed from a 10-run debacle against the Brewers, Velasquez has been largely consistent lately, posting four quality starts in June. He has slightly moderated his tendencies to issue walks (9.1 percent rate) and allow homers (1.3 HR/9), while striking out batters at a 28.5 percent rate. With a .306 BABIP, Velasquez is giving off the appearance of being a normal pitcher on balls in play, but thanks to a robust popup rate of 23.5 percent, his xBABIP is just .272.

Fantasy owners may be put off by Velasquez’s 4.69 ERA, but if his BABIP shrinks and his 67.5 percent strand rate corrects itself, he could even outperform his 3.67 xFIP going forward.

For more MLB News and Analysis check out our full library of Fantasy Baseball content.

Why not relive Draft Day a second time this season? Head on over to Fantrax where you can draft a team 364 days a year.