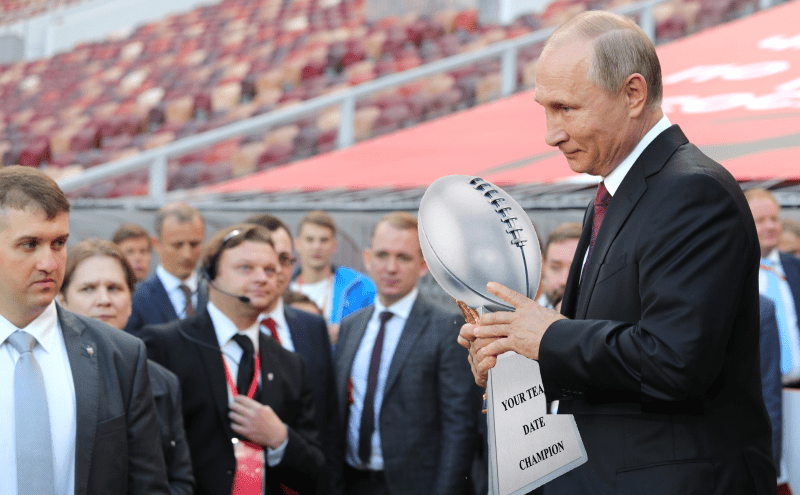 Fantasy owners are inundated with daily information prior to our fantasy draft day. Well, come to think of it, that’s not accurate. With social media, we’re constantly hit with up to the second information. #BREAKING causes us to lose focus. A training camp hype video. Replays from preseason games. Our favorite analyst’s latest tiers and rankings. Mock draft analyzer tool that comes free with a year-long subscription? Sign me up! Wait, what were we talking about again?

By now, you’ve done most of the research and should be ready for your draft. The crew over at Fantrax has got your back.

The information compiled is how you win fantasy leagues, but where’s the fun in all this? Folks will say, “The fun comes after winning your league!” But, can’t we kick off the fantasy season (pun intended) with some entertainment? This is a case of ‘both things can be true’ as fantasy players can enjoy their league from the start and finish of the season. So, it’s party time!

Each carries equal weight along with a common theme: Fun! We can’t all live like the cast on ‘The League’, but there are plenty of ways your fantasy draft party one to remember.

Where to Hold Your Fantasy Football Draft Party

What’s the fourth word in ‘fantasy football draft party?’ That’s right. Party. Regardless of what place is selected, the venue should have the look and feel of a party that’s coincidentally having a fantasy football draft in it. We’ve yet to hear about leagues traveling to Topeka, Kansas or Boise, Idaho for their draft party. They’re going to Miami, Vegas, or Los Angeles. Party places! However, it doesn’t take much to turn even the shabbiest of draft spots into a party zone.

A garage makes for an easy spot to convert into a place for a bunch of people to yell at each other over the value of Alvin Kamara. The group on the left make it look easy. Few tables for everyone to place their notes or laptops. Area for the draft board to be set up. Simple. The league on the right takes it to the next level. Restaurants like Buffalo Wild Wings will provide almost everything you need. The additional space allows for more people to show up and be involved. Kind of like…a party. Bring your family. Bring the kids. The more the merrier! Regardless of the number of people in your league, fantasy football can (and should) extend past the owner to their significant others. The more space, the easier it is to let them be a part of the start of your journey to the championship.

The venue sounds like such a simple aspect of the draft party, but it can be so much more. Notice the common theme in both scenarios. The people. Your leaguemates make it memorable, but the space makes it all possible. It doesn’t require much and the pay-off is hours of enjoyment that will be remembered throughout the season.

Let’s talk about the food for a minute. If you have a photographic memory or using a digital draft board so you can see who’s available, you’re going to need your hands. You’re either crossing off players from your ranking printouts or operating a laptop negating food that leaves residue. Chicken wings or nachos are a common party food, but do you really want cheese on your keyboard? So regardless of whether you’re #TeamDrums or #TeamFlats, you need to save those for later.

If you enjoy beer, then you’re in luck. Your fantasy football draft party gives you enough time to have a couple drinks before the draft starts and plenty of time during the draft to gulp down what you’ve got in the glass. However, a word of caution. Craft beer might be all the rage, but some of the brews can pack a punch. Let’s look at some options you can target.

If you’re not from the Mid-West, these might not be available to you. That’s okay! The simple connection between these two beers is that they’re low in ABV (alcohol by volume). They’ll keep you hydrated, but not intoxicated to the point you think drafting Aaron Rodgers in the second round is a solid draft strategy. Anything under 6% ABV should be safe for the two to three hours the actual draft should take. Pro tip? Suggest to your beer snob leaguemates to have another double IPA and watch the wild picks fly!

The reason everybody showed up. The cause for jokes during the draft. Draft boards become the focus of everyone in the room the moment the draft starts. But again, you’ve got options. There are only two major requirements:

Drafters should be able to easily view the board by names and positions. Frequently used color delineations on fantasy sites help keep positional runs visible to the league and should be used everywhere. However, they don’t need to be a financial sink and there are multiple ways to make the centerpiece of the draft party memorable.

Admittedly, nobody wants to be the guy on the left. There are plenty of pre-built draft boards that can get the job done. Building your own board takes time. Preferably, the right option is available. Projectors connected to online boards make the process much easier and league rosters are automatically saved once the draft is complete. Here’s where venue and draft board collide. With a little planning, this can be the easiest portion of the draft party.

So, there you have it. The keys to the perfect draft party. Fantasy football is competitive. Fantasy football gives us a chance to win the league. But, most important, fantasy football is fun! We spend so much time grinding over stats, watching the games, and pouring over our lines that it takes us away from our daily lives. Draft parties give us a chance to, even for a moment, bring everyone into the mix. Draft season excites us all and having a party brings it all together that just isn’t captured once the season gets underway.

So clean out the garage, throw up some tables, and let’s have a fantasy football draft party to remember!