Auction, Rotisserie, and Category Leagues for the Draft Dedicated 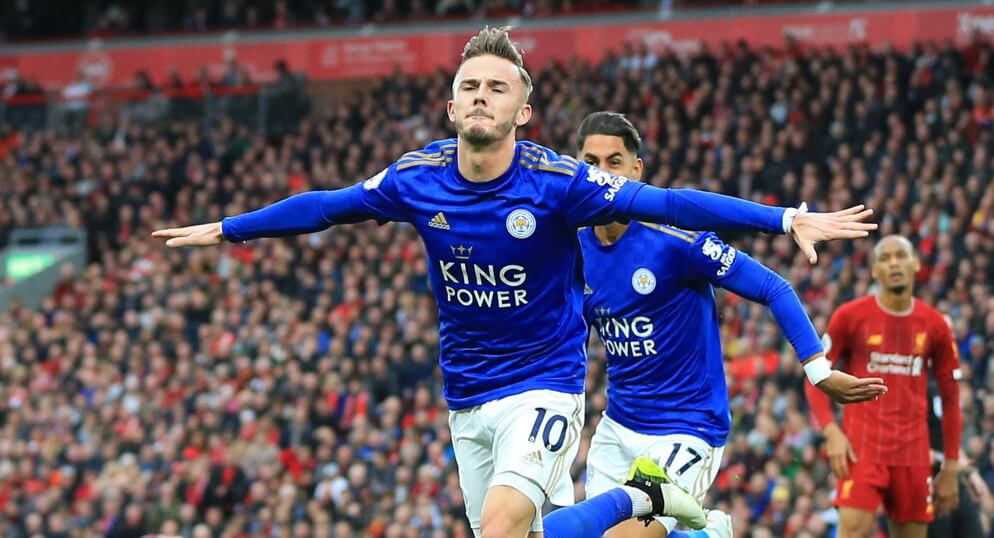 This article discusses Auction, Rotisserie, and Category league setups in Fantrax. There are many league setup options based on the level of commitment, difficulty, and strategy your league desires. Be sure to read the introductory article, “Choosing a Fantasy EPL Setup for Your Fantrax League” in order to gain a better understanding of the various “levels” in a Draft Premier League player’s evolution and the league settings that coincide with each level.

You’re Draft Dedicated. After a season or two, you’ve felt the thrill of the Draft Fantasy Premier League game, and it’s quite possible that you’re wondering how to up the ante for your league. How can you increase the challenge, the buy-in, the competition, and the strategy? Below we describe the specifics of various league setups that ramp up the level of strategy and competition for draft leagues. Read on as we discuss Season-Long Auction, Rotisserie, Head-to-Head Category, and Head-to-Head Most Categories league setups.

As discussed in the Draft Dabbler article, Season-Long leagues can be scored by Head-to-Head matchups or Overall Points. Adding the auction option doesn’t change the way that the league is scored, just the way that the league drafts players. Instead of drafting in a specific order, this setting transforms the draft into an actual auction. Before the draft, all managers receive the same amount of virtual money. Managers then take turns nominating players for auction. If you are interested in owning that player, you’re free to bid as much of your stash on that player as you wish. But keep in mind, you only have so much money. Do you try to buy 3-4 superstars, leaving the rest of your team lacking a bit? Do you try for more overall balance, but potentially lacking firepower? These are choices you have to make during the auction draft!

Whereas auction leagues don’t change the scoring of a league, the next few options definitely will! A Rotisserie league is a category-based scoring method. As an easy example, let’s pretend that your league has four categories (goals, assists, key passes, and clean sheets) and four managers. After the gameweek is over, the below chart shows the amount of each category that each manager’s players’ scored combined: 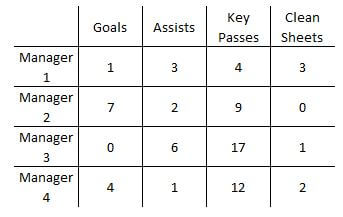 Using these numbers, the managers are then rewarded between 1 and 4 points (because it’s a 4-team league) for the week for each category based on the number their team accumulated compared to the rest of the league. In the case of a tie, you can pick between a number of tie breakers to use. 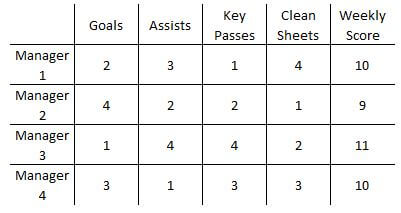 As is hopefully obvious, Manager 3 in this made-up league would be at the top of the table, in #1 position after this gameweek due to their combined score based on the number of categories they won. The season continues this way week in and week out. This format can make certain players quite valuable if they are known for delivering dependable numbers in a certain category. Ready to ramp up the strategy? Give it a shot!

Similar to a Rotisserie league, this league setup uses category-based scoring. However, instead of taking on the entire league every week, you’re facing just one other manager in a Head-to-Head duel. In this scoring setting, each category you win equates to a win or a loss every week. So, let’s use another hypothetical example! Below, we’ve got a similar league, using the same categories as the example above:

As mentioned, each category becomes a win or a loss for each manager every week. So, these two managers’ records would look like this after this made-up gameweek:

Each week, managers are awarded multiple wins and losses, but only based on how they perform against their opponent for that week, not against the entire league. Obviously, your record reflects the number of categories in your league, not the number of weeks played.

As mentioned, wins in each category are added up at the end of the week. The manager who wins more categories wins the week. So, the scoring would look more like this:

In this case, Manager 1 would win this matchup because he/she won more categories. The number of wins/losses is equal to the number of gameweeks played rather than the overall number of categories. All three of these scoring settings make each category valuable in its own way, and heavily influence the team you trot out each week and the players you draft in the first place.

Regardless of which one you choose, Auction, Rotisserie, and Category leagues are sure to add a level of challenge and strategy not present in the leagues chosen by most Draft Dabblers. This is an added level of complexity. And, since your now Draft Dedicated, we’re sure you welcome it.