Andrew Vaughn is slated to join the White Sox young, star-studded lineup soon. Eloy Jiménez, Luis Robert, Yoan Moncada, and Nick Madrigal are a few young hitters who have debuted over the last several years. Andrew Vaughn should join them soon and hit in the middle of that lineup with a ton of talent.

Today, we will dive in on Andrew Vaughn, the White Sox first base prospect who they drafted third overall in 2019. Vaughn went from an overlooked high school prospect to one of the most decorated college hitters in recent memory. He is considered a top-10 prospect by many services both for real-life and Fantasy Baseball. What can we expect in 2021 and beyond? Let’s take a look!

I previously mentioned that Andrew Vaughn was one of the most decorated college hitters in recent memory, and for a good reason. His freshman year at Cal, he slashed .349/.414/.555 with 12 home runs. His sophomore camping in 2018 was so good that it won him the Golden Spikes Award. That season he slashed an impressive .402/.531/.819 with 23 home runs in 54 games. Additionally, he walked 44 times to just 18 strikeouts. His junior year brought his college career to 50 home runs, 163 RBI, 145 runs, and seven stolen bases in 160 games. His career slash line at Cal finished at .374/.495/.688 with 123 walks and 75 strikeouts. All of that earned him a 7.2 million dollar signing bonus from the White Sox as the third overall pick.

Upon making his professional debut with the White Sox rookie ball club, he moved quickly. After three games with the White Sox rookie team in the Arizona League, he moved to low-A Kannapolis. After a solid 23-game showing there, he moved up to High-A Winston Salem. In total, Vaughn played 55 games between three levels in 2019. He slashed .278/.384/.449. While the power output was not what many hoped for, six home runs was still solid. Vaughn also showed great discipline at the plate, walking 30 times and only striking out 38 in his first taste of professional baseball.

If Covid-19 had not messed up the 2020 MILB season, Vaughn would have likely started in Double-A and advances to Triple-A by season’s end. Instead, Vaughn spent Spring Training with the team before the shut down occurred, then faced the White Sox staff in intrasquad games before the season began. He also spent the regular season at the alternate training site, where he stood out and got rave reviews. Beyond standing out on the field, he also received praise for his work ethic. Double-A manager Kevin DeYoung said, “He is a pretty efficient mover. He’s definitely a special personality and a special level of focus. The guy is locked in all the time.”

There are few questions left about Andrew Vaughn and if he is Major League ready. Unless you see the White Sox buy-out Vaughn’s team control, similar to what they did with Eloy Jiménez and Luis Robert, I don’t anticipate him being on the Opening Day roster. But, the White Sox have shown their willingness to do that, so it is a possibility. If not, I anticipate Vaughn to be up in late April or early May.

Let’s take a look at what Andrew Vaughn has to offer and why he is one of baseball’s top prospects.

Andrew Vaughn is a natural hitter at the plate. He keeps things simple and lets his natural hitting ability and power take over. You never see Vaughn trying to do too much. He has a great feel to hit and does not chase pitches often. He seems to be well focused on pitches that he can crush early in counts. There are no real holes in his swing, and he gets great bat speed through the zone. He also hits the ball to all fields extremely well.

At approach, Vaughn had a side set up. He likes his front foot to be right at the front of home plate, while his back foot is at the back edge of the box. He stands with his knees bent, which with his 6’0 frame, really shrinks the strike zone. Vaughn’s hands sit slightly above his shoulder, with his bat starting parallel to the ground.

When the pitch is thrown, Vaughn has a high front leg kick and gets his weight on his back foot. He also loads the bat well, bringing his hands back behind his shoulders. Despite the big load, his hands stay at the same height they began, which helps him keep a consistent plane to the ball. When his front foot plants, he points it toward the mound, torquing his body through and letting his natural strength do the work.

While Vaughn is not the most athletic player on the field, he has an extremely athletic swing, which leads to high contact rates. Eric Longenhagen from Fangraphs stated: “There’s no margin for error for right-handed hitting first basemen, but if there’s one prospect to be confident in hitting as much as is necessary to profile at first, it is someone with this combination of visual evaluation and statistical track record. Vaughn’s post-draft TrackMan data is also supportive and suggests he could be a .300/.400/.500 hitter.”

The tools are there for Andrew Vaughn to be a consistent high-end hitter. He is also disciplined enough to draw walks and post a high OBP. His zone awareness and pitch selectivity are top-notch and only help Vaughn have a high likelihood of succeeding at the big league level. The hit tool is one of the safest bets among all prospects.

It is easy to see Andrew Vaughn as a career .280 hitter with some .300 season sprinkled in. With his elite plate discipline, it would also not be a surprise to see some near .400 OBP seasons out of him.

Andrew Vaughn possesses plus power in his profile, but it is natural power. You never see Vaughn swinging out of his shoes to hit a ball out of the yard. He uses his natural strength and God-given talent to hit home runs. He hits to all parts of the field well and has the power to hit home runs to the opposite field. While all of his professional home runs in 2019 came on the pull side, you can see he got very close to hitting several opposite-field home runs. 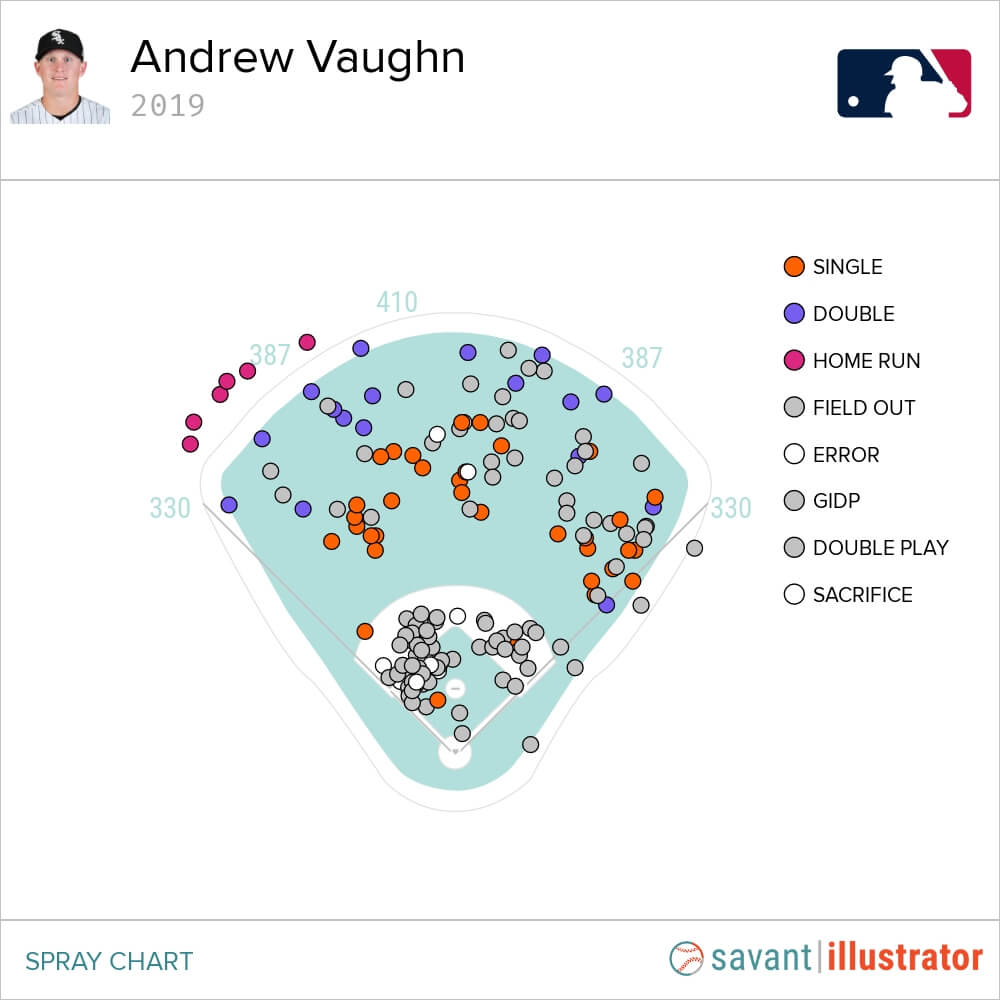 While the power is natural in Vaughn’s swing, he still uses a high leg kick to generate that power. He loads the bat well with his hands and gets great bat speed through the zone. His swing looks effortless, but he uses his whole body to torque through the zone.

There is not much power projection left in Vaughn’s frame as he sits 6’0″ 215 pounds. Despite the lack of physical projection, you know what you are going to get from him. A hitter who has a great feel to hit and hit for power.

Vaughn should consistently hit 25 to 30 home runs perennially, with peak season approaching 35. Pairing that power with a solid batting average and on-base percentage helps give Vaughn both a high floor and ceiling for Fantasy Baseball.

I previously mentioned that Vaughn had a very athletic swing for his unathletic body. The unathletic part likely limits Vaughn to first base. He is a below-average runner but moves well enough around the bags and in the field. Vaughn will not be a threat to steal more than a couple of bases a year, but his bat will play up enough to provide plenty of value. He could be a four-category stud for Fantasy.

Defense does not matter for Fantasy purposes, but it is useful when seeing where he could project for position eligibility. Vaughn is a solid defender at first base, which is his most natural spot. Since he began college, the only position other than first base he has played is pitcher. Vaughn got work at both third base and right field during the 2020 season. I would not expect him to play anywhere except first base or designated hitter at the big league level.

Andrew Vaughn should be an all-star caliber first basemen for many years to come. The White Sox are already building an elite lineup with their young talent, and Vaughn only makes it better. Hitting in the middle of that order should provide plenty of opportunities for both runs and RBIs.

With Vaughn’s contact skills, feel to hit, natural power, and patient approach, he should be an elite four-category producer for Fantasy Baseball for years to come. Think about Freddie Freeman type production at the plate. Freeman is a borderline first-round pick year in and year out, and that is what Vaughn could produce like in peak seasons.

I previously mentioned, but if the White Sox decide to buy out Vaughn’s team control, he should be on the Opening Day roster in 2021. If not, he should debut in late April or early May, once the team gains an extra year of control. He will likely get reps at both designated hitter and first base when Jose Abreu needs a day of rest.

For dynasty purposes, Andrew Vaughn is a top ten prospect in my rankings, right behind Spencer Torkelson at first base. The combo of his ability to hit, plus his proximity to the bigs, makes him a great target for anyone looking for a first baseman in your dynasty leagues. Now is the time to buy because once Vaughn debuts, the price is likely to rise.