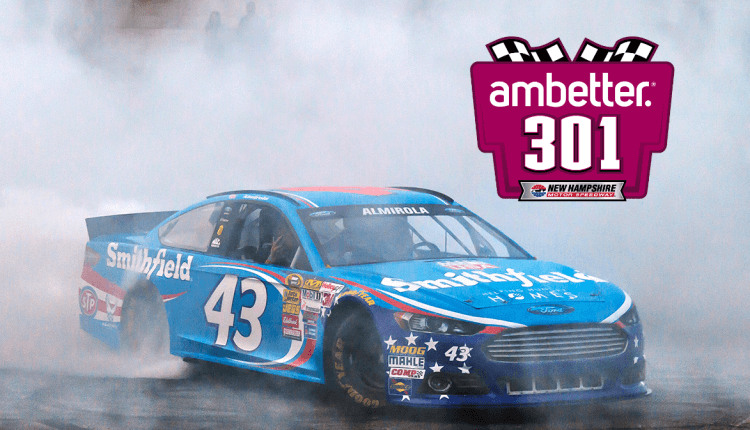 Just seven regular-season races left as we head north for the Ambetter 301.

I was out of town on Sunday, so I didn’t get to watch the race, and the results looked like the race hadn’t even happened when I first glanced at them. Then I learned that Corey LaJoie came exceptionally close to expanding the field of first-time winners and continuing the march toward playoff chaos.

Instead, Chase Elliott became the first driver to win three times on the season, putting some distance between him and the rest of the field in the Cup Standings. He has a 47-point lead on Ryan Blaney, who remains winless after finishing fifth.

Ross Chastain remains third and found himself entangled with his favorite crash partner, Denny Hamlin, late in the race when both were still in the Top 10. The No. 1 car rallied to finish second while the No. 11 slid all the way to a 25th place finish.

Those two are guaranteed their playoff spots, and their feud falls into must-see TV territory.

The drivers take their crews north for the Ambetter 301 at New Hampshire Motor Speedway this week. This track, also known as The Magic Mile, has a long NASCAR history, and some of its most successful drivers also are looking for their first win this year. Buckle up, my friends, because this one could get crazy.

Here is a list of drivers I anticipate rostering in DFS and fantasy-long formats this weekend. I’ll be back Sunday morning with some recommendations based on qualifiers from Saturday and a free DFS contest for us to play. If you have any questions or thoughts, let me know at @thewonkypenguin.

Almirola thrives on fast 1-mile ovals, and it’s his jam, jelly, and peanut butter, per se. With a 106.8 rating in New Hampshire, this is also perhaps his best shot at getting into the playoffs. He is 23 points behind Kevin Harvick for a playoff spot but will immediately be on further outside looking in if another unique driver claims victory. While FanDuel hiked his salary from $5,000 to $7,800, this reflects his proficiency here and is still wildly affordable for DFS lineups.

Much like Almirola, Harvick’s career shows that he, too, might circle all 1-mile ovals at the beginning of each race season and put little heart stickers around them. His 118.8 driver rating in New Hampshire appropriately reflects this, and if we weren’t dealing with NextGen cars, he would be hovering near the top of the betting odds as well. He continues to do enough to sit in playoff contention, but he wants this win for security purposes. I expect him to run well.

What’s a guy gotta do to get a win around here? Blaney has the most expensive salary on FanDuel at $14,000, which might help drive down his ownership percentage. But it also reflects how the books view him in the Ambetter 301. He is in every race and typically provides positive value at any salary, and I remain shocked he has been shut out so far this year.

Hamlin has been so good over his career that 1-mile tracks aren’t even his most dominant, and yet he carries a 115.0 driver rating in New Hampshire. His $12,000 salary remains the same as it was last week, and if he can manage to avoid any kamikaze moves by Chastain, he should finish in the Top 10. He seems to be running exceptionally well of late, so I plan to have a sprinkling of him in multiple lineups.

Truex is also one of the three drivers currently in playoff spots without a win. He historically does quite well on 1-mile tracks and has a reasonable salary of $11,000. While his driver rating is lower than everyone already listed, we’re again discussing the importance of experience and still assessing whether this will eventually play a role with the new cars. Still, depending on the qualifying position, he should be a solid addition to lineups.

Bell’s salary jumped to $9,500 for the Ambetter 301; he finished second here last year. As the bottom guy clinging to his playoff position by 19 points, he has the most to lose if another driver secures his first win of the season. I’m sure he would prefer to take the mystery out of it by winning on Sunday, and he has a reasonable salary to help make this happen for your DFS team as well.

Brad Keselowski’s driver rating in New Hampshire is 131.7. FanDuel even bumped his salary UP to $6,000 to reflect this. Imagine the absolute chaos of a Keselowski win. He did give you 13 positional points last week and finished the race in one piece with no leftover regulation violations. Essentially, this is the best position the No. 6 car has been in all year. His rating and salary combined are like the giant red button on the wall you were told not to push. You know you’ll push it because you must see what it does. Go ahead and roster him. The first one’s free (which is precisely how much money I’m recommending you risk).