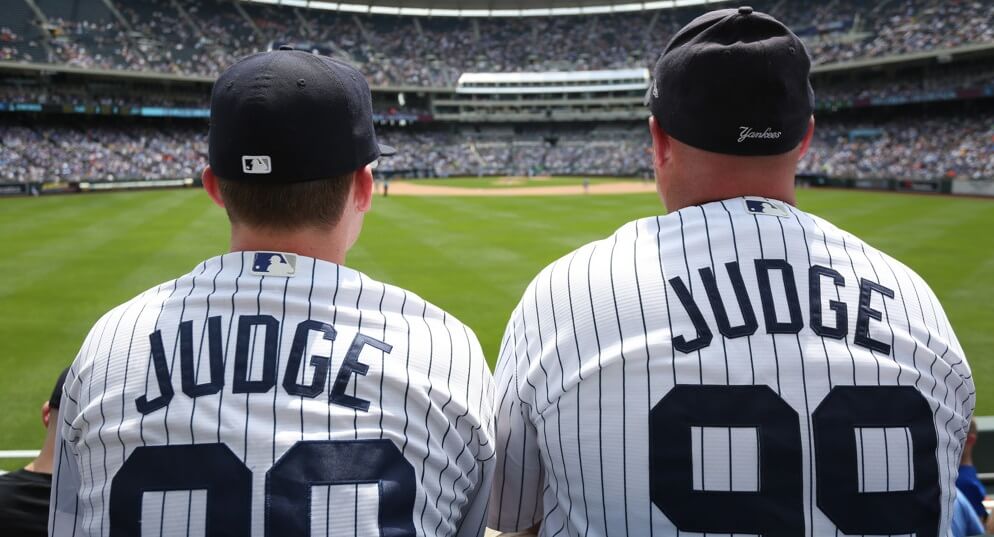 In the last entry of this series, we looked at outfielders who appeared to be a discount according to our Fantrax projections. Well, it’s time to put on our sassy pants and turn the tables. Into the great Realm of Negativity, we wander. Our destination? Truth. Join me on this quest to decipher these potentially over-drafted outfield busts, won’t you?

We begin right up near the top of the outfield ADP with Aaron Judge. While he has been a premier power and OBP option while on the field, his missed time recently has to factor into his projection. Strange as it may seem, 568 PA would actually be the second-highest mark of his career. Judge has played just 112 and 102 games over the past two seasons. Frankly, if you factor in the replacement player value with his OF31 projected line, you would still probably take a loss on his OF8 ADP. I’ll take my chances.

Particularly if the balls remain juiced, he can repeat his 2017 line of 128/52/117/9/.284 over the course of a full season. There is the additional risk that he steals only 3-5 bases, of course. That would make him less desirable in this stolen base deprived landscape. There are plenty of ways to catch up in steals though, and the elite power production is a terrific offensive anchor. I would almost draft Judge just for his Statcast rankings. They’re beautiful. Just look at it! 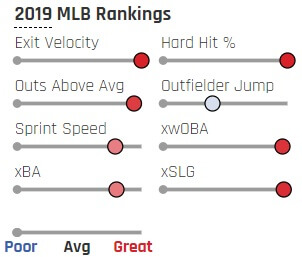 Settle down now, Yankees fans. Yes yes, it’s two in a row to begin this article. It’s ok! It’s just a projection, and (spoiler alert) it doesn’t ruin my odds of drafting him as the 15th OF off the board. The Fantrax projected Score puts him at the 66th best outfielder (!!) due primarily to his injury history. His 508 PA projection is more of a hedge than the likes of Steamer gives him (612 PA) so everything takes a big hit.

While Stanton does tend to miss time, he averaged nearly 700 PA per season over his previous two. As with Judge, you’re banking on health here. If he’s healthy, he stands a very high chance of making it two out of three seasons with 38+ HR and over 100 runs and RBI. He is also 33 picks cheaper than his teammate, so your risk isn’t quite as high. I’m all-in on this ADP, personally. Even in a partial season, he can deliver elite power production and you can fill in with a replacement off of the wire, which the projection doesn’t factor in.

Jorge Soler had a massive breakout in 2019, going 95/48/115/3/.265, accruing 679 PAs by playing all 162 games. The first thing we have to do is chop that playing time projection back quite a bit. Less than 600 projected PAs seems a bit extreme, and maybe it’s a bit too conservative, but the odds of surpassing 675 PAs again seem slim. We have to expect the power production to regress somewhat from his staggering .304 ISO. If he can come anywhere near repeating his upper-crust 16.9% barrel rate though, he will remain a high-end power source.

Soler is far less proven than the likes of Judge and Stanton, of course. Even though you’re not quite paying the price for Soler that you paid for the Bronx bombers, you aren’t getting the same assured production either. Not to mention that it’s a bit of a dropoff going from the Yankees lineup to the Royals. I think this is a very good projection. It only stacks up as the 34th best OF option, substantially behind his OF17 ADP. I’m going to pass at that price even if he doesn’t exactly fit the outfield busts label.

The fantasy masses simply cannot wait for Kyle Tucker to arrive, and who am I to blame them? In spite of his distressing .206/.278/.374 slash line at the major league level, it is still only 144 PAs and he is barely 23 years old. On top of that, he hit 34 HR with 30 SB over 125 games at Triple-A Round Rock in 2019. Just gloss over the fact that he only hit .266 even in the extremely hitter-friendly Pacific Coast League with the juiced MLB baseballs.

Also, apparently, gloss over the fact that he currently has nowhere to play with the Astros. His primary opening is in right field, where he could potentially beat out Josh Reddick in training camp. If he doesn’t, you’re looking at inconsistent playing time until either injuries or poor performance from teammates allow him more playing time. He is the 36th outfielder off the board, but just the 81st OF according to the given projection. He’s clearly an upside pick, and now that Dusty Baker is at the helm, he’s more likely to steal 20+ bases over a full season. This is still awfully early to be banking on the upside, though. While I wouldn’t let him slip as late as the 81st OF, I would need him to fall a good 30 picks from his current 148 ADP before I’m drafting him (barring an early announcement that he has won a starting OF gig).

Another year, another draft season chock full of people drafting for a full season of David Dahl. Another year of him being one of the bigger outfield busts? At least this year you aren’t paying a top 25 outfielder price. Heading into 2020, Dahl is your OF37 according to ADP, but OF70 per projections. Even his projected 472 PA would be a career-high by 59 as he simply and sadly cannot stay on the field. He could conceivably play 140+ games and turn a Coors-inflated profit, with a ceiling something like 90/25/90/10/.300. That would be a nice player, but is it nice enough to be worth the gamble with the 151st overall pick? I’d rather take a chance on the likes of Franmil Reyes or Lourdes Gurriel, Jr., who are each 10+ picks cheaper.

Got a beef with Nathan’s take on potential outfield busts? Let us hear about it in the comments below.