ADP Risers: How a Shortened Season Has Changed ADP

Baseball is back, and it’s time for Fantasy Baseball players to get back to work on draft preparation. For many players, strategy for a 60-game season will be completely different than the usual 162 game grind. Fantasy Baseball in 2020 will be a sprint to October, rather than a marathon. The changes to the MLB Season have also led to many changes in Fantasy. One of those being the Average Draft Position (ADP) for some players.

Jesus Luzardo is just one example of the many innings-limit starting pitchers who have seen their ADP rise significantly since the shutdown began on March 13th.

This article will address players who have seen a significant surge in their ADP and if those players can still provide value at their current ADP. It is important to note that all ADP’s listed in the heading are since May 1st on NFBC. When studying data, May is when we started seeing a significant change in ADP.

ADP Risers Since May 1st

Jesus Luzardo is one of the most talked-about ADP risers since May. From the beginning of the Fantasy draft season until April, Luzardo was going at an average pick of 119. Over the last two months, that number has jumped by nearly 50 picks.

Luzardo is the perfect example of an innings-limit pitcher seeing a bump due to the shortened season. It makes sense due to the fact Luzardo would likely not throw more than 120 innings over a full season. Last season, Verlander led the league with 223 innings pitched. Now, Steamer projects the league leader for the 60-game season to be Jacob deGrom at 76 innings. Luzardo will likely be much closer to the league leaders as Steamer projects him for 60 innings.

There are concerns that Luzardo will not go deep enough into games to provide value at his ADP. He has thrown six innings in a start ONCE in his minor league career. It will take time for a young pitcher like Luzardo to build up arm strength. With a likely max of 12 starts, Luzardo will not have the time he needs to build up and go deep into games. Zack Greinke would be a better option at his ADP because he consistently goes deep into games and provides quality innings. Don’t take this as a knock on Luzardo as he is an ace in the making. For 2020, the innings concerns are enough to make me pass at his current draft price.

Rich Hill sees a massive boost in value due to the delayed season. After having elbow surgery in October of 2019, Hill was going to miss over half of the season. Now, he is fully healthy and ready to begin the season. The Twins, unlike the Dodgers, will need to get everything they can out of Hill to make a run in the postseason. When he is on the mound, Hill has been dominant! Over the last four seasons in 465 innings pitched, Hill has pitched to a 2.92 ERA with a 1.09 WHIP and 10.66 strikeouts per nine innings.

If Hill can prove to be healthy, he can be a great value even though his ADP is nearly 200 spots higher than it was in early draft season. I have seen him go as high as 134 in a mock draft, which seems high. But, if you can get him in the mid-to-late 200’s, he is worth the pick.

Spencer Howard’s ADP has risen over the last few months as many expect him to grab the fifth spot in the Phillies rotation. Howard was dominant in 2019, pitching to a 2.03 ERA in 71 Minor League innings pitched. Couple that with a .831 WHIP and 94 strikeouts, and you have the makings of a great pitcher. Howard’s pitch mix features a plus-plus fastball that can reach triple-digits. His slider also devastates hitters and is a big reason he puts up big strikeout numbers. Add in an improving curveball and changeup, and Howard has a solid four-pitch mix.

The Phillies are in a stacked division and will need to put their best pitchers on the mound to win. It seems like a given that Howard will beat out one of Eflin or Velasquez for a spot in the rotation. Despite how far he has moved up drafted boards, if he gets a rotation spot, Howard is still a good value even at pick 280. Owners should not expect ace-like numbers from the rookie this year, but he should provide solid stats to help your fantasy team.

The CJ Cron hype train is officially leaving the station! Cron has been a favorite target among some Fantasy writers for most of the offseason. The hype is now catching up across the board. Cron hit 25 home runs with a .253 batting average in 499 plate appearances last season with the Twins. He was noticeably better in the first- half of 2019, hitting .266 with 17 home runs.

Cron fell off in the second half due to a thumb injury that hampered him for a couple of months. He landed on the injured list twice but played through the pain for most of the second half. Despite the injury, Cron still had a solid 2019 season and showed that he has more in the tank for 2020.

Cron’s Statcast data is quite appealing, as he excelled in the majority of hitting categories. Some are concerned about his move to Comerica Park, generally known for being pitcher-friendly. You can see Cron’s’ batted-ball chart from 2019 overlayed in Comerica. It looks like he will be just fine hitting in his new home park. Even with the rise in ADP, Cron is a good value considering first base is a shallow position. Cron will finish the year as a top-five first baseman, mark it down! 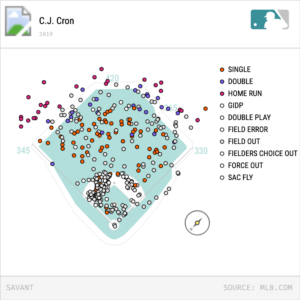 Franmil Reyes has been a favorite target of mine for 2020. Reyes flaunted his power last year, hitting 37 home runs in 548 plate appearances between San Diego and Cleveland. With the Padres deep outfield, Reyes did not play regularly for the first month of the season. He showed his worth but was ultimately traded to Cleveland in the deal that sent Trevor Bauer to Cincinnati and Taylor Trammell to San Diego. Reyes did struggle upon being shipped to Cleveland, but he did not forget how to hit for power.

Now, Reyes is settled in with the Indians and is projected to hit fifth in a solid lineup. He mashed baseballs, as you can see in his Baseball Savant profile. Both his exit velocity and hard-hit percentage were both 99th percentiles among all hitters. Reyes exit velocity on fly balls and line drives was also a staggering 98.2 miles-per-hour, good for fourth-best in baseball. He has the makings to lead the league in home runs during a shortened season if he starts the season strong. Over a full season, he has the potential to hit 50 home runs.

At his early draft price, Reyes had a lot of room to profit. Now, Kyle Schwarber seems like an excellent option to put up similar stats and is going nearly 30 picks later. I still love the potential breakout for Reyes, but it looks like the market is catching up, and he is not the value that he once was.

Nick Anderson is a trendy reliever that many expect to grab the Rays closer role. The concern is that the Rays have not committed to Anderson as their closer. In 2019, 11 different players recorded a save for the Rays, and Nick Anderson was not one of those players.

Despite not recording a save for the Rays, Anderson was one of the Rays best relievers. He was good for the Marlins before being traded, but Anderson took off in Tampa Bay. Anderson pitched 21 innings and recorded a 2.11 ERA with 41 strikeouts in 21.1 innings pitched. His season-long stat line ended at a 3.32 ERA with 110 strikeouts in 65 innings.

Anderson is a dominant pitcher and resembled Josh Hader with his dominant outings. The concerns are the lack of track record and the lack of the Rays commitment to one closer. If you want to draft a closer in this ADP range, Ken Giles feels like a safer option going ten picks early. I prefer to wait on saves until the late 100’s and target players like Keone Kela and Joe Jimenez.

Mauricio Dubon is the last ADP riser this article will examine. He is a popular breakout pick and a personal favorite of mine. Last season between AAA and the Major League, Dubon hit .302 with 20 home runs and ten stolen bases in 537 plate appearances. After being traded to the Giants, Dubon played 28 games, hitting four home runs and stealing three bases with the big league club. Dubon has been popular as of late, with has ADP rising nearly 100 spots since early draft season.

Regardless, he is still a good value at his ADP, given the skill set he offers. Second base is a shallow position, and Dubon could provide the value that brings him into must-start territory at second base. He hits the ball exceptionally well to all parts of the field and provides a high batting average. His low walk rate could hurt you in an OBP league, but for standard 5×5 leagues, Dubon’s skillset plays well.  Despite his rise in ADP, he should provide a good return on investment where you can draft him.

Also check out our favorite under the radar pitchers!

National League Hitters That Benefit From the Universal DH