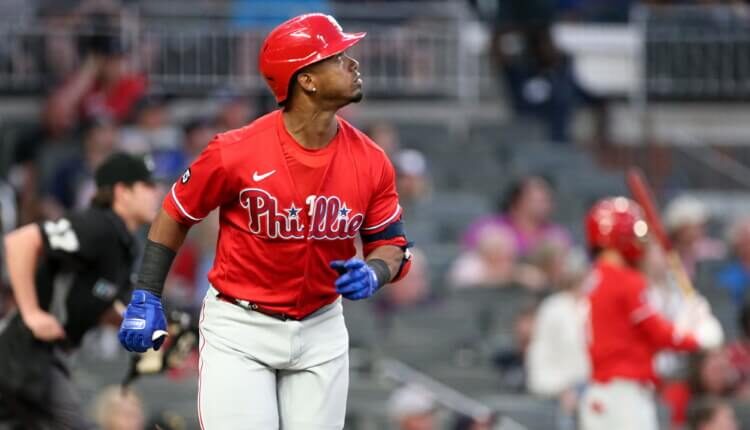 As the draft season ramps up, it is always good to look over the average draft position (ADP) to find some perceived value. One of the best-perceived value forms is finding players with similar skill sets and likely statistical outcomes with ADPs that differ quite a bit. The value is waiting and drafting the second player at a cheaper ADP while using the early draft pick on a different team need.

When combing through the NFBC Draft Champions (DC) ADP, there are a lot of excellent values that relate to similar players. In this article, I will be digging into another one of these values to help you better plan your draft strategy and maximize the best out of your teams as you leave the draft room.

For this ADP analysis, looking into similar players will revolve around the second base position. I will look into a popular multi-position player that most will draft for his second base appeal and compare this player to a veteran second baseman who continues to go underappreciated in drafts. The players being compared are Jake Cronenworth and Jean Segura, so let’s dig in and explain why passing on Cronenworth, as hard as it may be for some, and waiting to draft Segura is an intelligent draft decision.

Positional Flexibility is Not Enough

Cronenworth had an excellent 2021 season for the Padres. He hit .266 with a surprising 21 home runs while scoring 94 runs and driving in 71. Cronenworth hit all over the Padres’ lineup due to injury but spent most of the season hitting second, third, or fourth, and the offensive production followed.

Most would have expected a higher batting average for Cronenworth, and his .280 xBA agrees. Cronenworth’s average took a hit with a 43.1% groundball rate to go with a .283 BABIP. The run production was still great even with the low batting average, thanks to an 8.6% walk rate and a .340 OBP. Cronenworth did a great job getting on base one way or another and made many fantasy managers happy with the 94 runs scored.

The 21 home runs were the most surprising part of Cronenworth’s 2021 season. He hit 21 home runs on 35 barrels, suitable for a 60% home runs per barrel rate, close to the 64% league average. Cronenworth ran very well with a 23.6% fly-ball rate and 12.1% HR/FB. He did so well in the home run department because of a pull rate of 32.9%, and all of his home runs were pulled home runs. 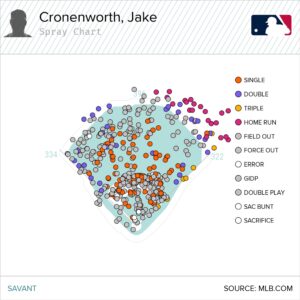 As the spray chart shows, Cronenworth could have had even more home runs but was a bit unlucky. Still, 21 is quite a bit from Cronenworth, and the projections think that is not sustainable.

What is sustainable is his plate discipline and contact quality. He only struck out 14% of the time, ranking in the 90th percentile last season. He was extra patient at the plate as well, as his O-Swing, Z-Swing, and overall Swing% were all well below league average. He made the most with the patience as all of his contact rates were much better than league averages.

Cronenworth did well last season. He supplied more power than most thought. He scored nearly 100 runs. He also showcased excellent plate discipline and contact rates that coincided with some success. There is reason to believe his average could improve in 2022, but the power is tough to sustain with a 7.2% barrel rate and 34.6% hard-hit rate.

Besides the batting average and runs he brings to fantasy managers, he also brings excellent multi-position eligibility. For the 2022 season, Cronenworth will have first, second, and shortstop eligibility. That is valuable in the draft and hold formats, but it is not as important as we look to season-long FAAB leagues. For February, he has an Online Championship ADP of 136.7, which is a bit too rich for my blood. Especially with an option like Jean Segura being drafted much later.

Stop Sleeping on the Veteran

The 31-year-old Segura is coming off a strong 2021 season of his own. Sure he did not hit 21 home runs like Cronenworth, but he did hit 14. He hit those 14 while sporting a solid .290 batting average, scoring 76 runs, and driving in 58. Segura also showcased his legs by stealing nine bases to Cronenworth’s four. So Cronenworth beat Segura in the power departments, but the difference in batting average was very significant, as well as five more stolen bases.

Segura also did his damage in 131 games (567 PA) compared to Cronenworth’s 152 games (643 PA). Cronenworth also had a little more health on his side to go with the power boost. Other than that, though, things were very similar between the two.

Segura will rarely light the world on fire in the power department as he has only hit 20 home runs once, and that was in 2016. The power may not be massive, but he has stolen double-digit bases in seven straight seasons from 2013-19 before only nine steals in 2021. Segura will also hit for average as he has hit .280 or better in each full season dating back to 2016. In a world where stolen bases and batting average assets are hard to find as the draft goes on, Segura should be a much more popular pick than he is at his current 215.5 ADP.

Most will be captivated with the 21 home runs last season from Cronenworth, but I beg you to resist. Cronenworth will be good, but there is a great chance his power and run production numbers are very similar to Segura’s by the end of the 2022 season. The projections agree as well.

The Bat X has Cronenworth playing a few more games with three more runs scored and the exact RBI while Segura has a better batting average (expected) with one more home run, and two more stolen bases. The stat lines are pretty similar, which makes a ton of sense. The stats listed earlier in the article, and if you want to dig deeper into past seasons, are very similar offensive players.

Another plus in Segura’s favor is team context. The Phillies offense is loaded with Bryce Harper, Rhys Hoskins, and J.T. Realmuto hitting behind Segura, who likely leads off. Segura will also have the luxury of hitting in Citizen’s Bank Park, a hitter-friendly park. On the flip side, Cronenworth will be in the Padres’ lineup, which has Manny Machado and Fernando Tatis Jr., but many other questions after those two. He will also hit in Petco, which is not hitter-friendly.

Why take Cronenworth so much earlier than Segura with similar profiles and expectations? The different positions are nice but not worth nearly 80 picks. You can pass on Cronenworth and draft Jared Walsh, Willy Adames, and many other players. If you do not like Segura, you can at least wait for nearly 40 picks for Ryan McMahon or even 100 picks for Jonathan Schoop.