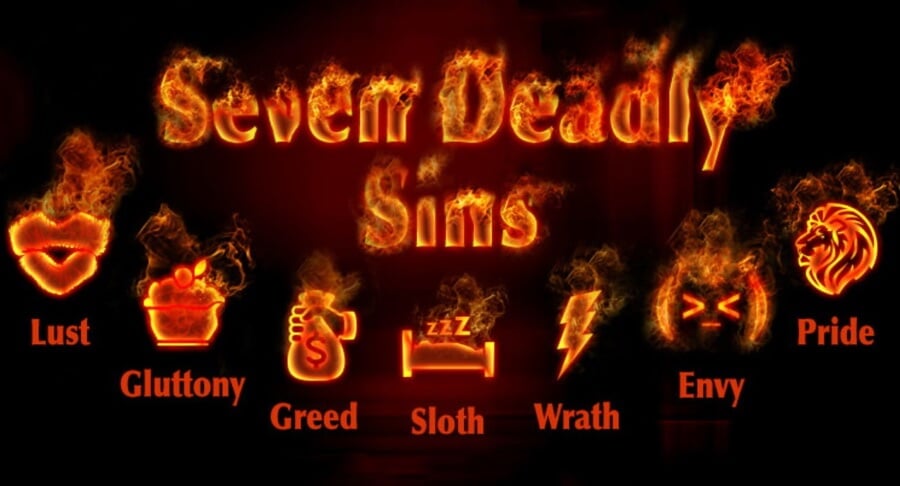 Most of us are familiar with the seven deadly sins. Many of us are even guilty of a few of them on occasion. In fantasy, there are also plenty of things you should and should not do. I covered many of them in my fantasy baseball draft strategy series. The more I thought about my core draft principles, the more I realized that many of the things I have been preaching center around the seven deadly sins. Don’t believe me? Well then allow me to explain how the seven deadly sins closely resemble many of the common mistakes made by fantasy owners. And if you believe that I am being a bit too liberal with the use of the word “deadly”, I will argue that perhaps you, dear reader, need to take fantasy more seriously.

Lust is an intense longing or desire. Last spring, I was guilty of lusting after Jose Alvarado. Not in the more conventional sense of the word (not that there’s anything wrong with that), but I went a little overboard in my appreciation for the would-be closer of the Tampa Bay Rays. I saw the second half numbers from 2018 and the GIFs of him making Aaron Judge look ridiculous and I was convinced that Alvarado would finish 2019 as a top-five closer. It got to the point where I had to have him. I passed on several other closers (including Josh Hader, who I predicted would be the No. 1 closer) and took Alvarado as my RP1 in multiple leagues. Needless to say, that did not pan out. The lesson here is to not get fixated on any one player and take what the draft gives you.

Gluttony is an overindulgence of anything to the point of waste. This is an important lesson, especially for those playing in Roto leagues. You must have balance throughout your roster. A team that has 100 more home runs than the next closest team but is last in stolen bases will earn less combined points in those two categories than a team that finishes fifth in both categories. If you have a massive surplus in one area but are woefully short in another, that surplus is going to waste. Those who draft Trea Turner in the first round do not need to turn around and grab Adalberto Mondesi in the fourth.  Take stock of your roster’s strengths and weaknesses throughout your draft. This will enable you to consider value as well as balance once you have the core pieces that make up the foundation of your team.

The next of the seven deadly sins is greed. I’m not going to lie – I get a little greedy sometimes. Once you win a decent amount of money playing fantasy, it is hard to settle for anything less. When I was competing for an Overall title in football in December, I told my wife that if I won, she could have the money. Well, most of it at least. I’m sure I would have purchased something frivolous. But I really didn’t care about the money. I just wanted another big fake check to put on the wall of my future man cave. I did not win, and I was miserable despite finishing in the 99th percentile of teams in the contest. Now that I re-read that, I am sure you all think I am a huge jerk and are probably glad I didn’t win.

I swear I was going somewhere with this. Ah yes, greed. Well, I can admit that I may not be the person best suited to talk about the evils of greed in fantasy. Then again, I have never created fake accounts or colluded with others to multi-max enter a contest. See, I’m not so bad after all! Besides, I always try to donate a portion of my fantasy winnings to a worthy cause. Wait, yes! That is where I was going with this! If (no, when) you win your league, do not be greedy and hoard your money like Scrooge McDuck. Pay it forward and give it to someone less fortunate. Or, if you are so inclined, you can even pass a slice of that bread my way if you would like. D’oh! There’s that greed again… ok, fine. Just give some to charity.

If you read my fantasy baseball draft strategy series, you should have a pretty good idea of where I am going with this. If you did not read it, please do so. Once you are finished, go to our comments section at the bottom of this page and write a glowing review of my work. Now that my shameless self-promotion is out of the way, let me discuss the next of the seven deadly sins, sloth. Sloth is a habitual disinclination to exertion. Lots of fantasy owners exhibit this trait, often unknowingly so. An owner who enters the draft room without league-specific player values is doing themselves a disservice. Coming up with a value formula that works for you is tedious, especially when you play in multiple leagues with different settings. But it is a critical part of the process if you want to be a serious fantasy player.

I was watching a Kevin Hart special a few years ago, and he and his entourage were huddling up before the show. He kept repeating the same line. “Everybody wants to be famous, but nobody wants to put the work in.” That is pretty good life advice, and it applies to fantasy baseball as well. Simply going off rankings is lazy fantasy, as the esteemed (and hopefully soon to be verified on Twitter) Joe Pisapia likes to say. This is especially true in fantasy baseball. Rankings do not take marginal values into account. The difference between the seventh-best and eighth-best second basemen is not the same as the difference between the eighth and ninth. Nor is it the same as the difference between the seventh and eighth-best shortstop. You must properly quantify each player’s true worth to find values throughout the draft.

Wrath is an uncontrolled feeling of rage or anger. This can happen when the guy who has already had 10 wings at the draft spread grabs the last one. More likely it will occur when you get sniped on a player you had been targeting. It is virtually impossible to go through a draft without missing out on several players you were hoping for. It is the nature of the beast. When this happens, what you absolutely cannot do is let it put you on tilt. You cannot get angry because that will lead to rash decisions. Instead, you need to gather yourself and properly assess what to do with your next selection. Making a sensible pick at every opportunity is of the utmost importance in drafts. Having your player values handy is the best way to avoid making picks out of spite or a thirst for revenge.

Envy is resentful covetousness towards the traits or possessions of someone else. You may become envious when you find out that you have a late first-round pick. That would mean you have no chance to draft Ronald Acuna, Mike Trout, and a bevy of other elite fantasy players. At that point, what’s done is done. You cannot dwell on it or change it. All you can do is draft to the best of your ability. No single player is a must-have in fantasy baseball. Ariel Cohen studied teams who competed in the NFBC Main Event and #TGFBI last season and discovered that the draft slot with the most combined winning teams between the two contests was the 13th slot. The next highest was the eighth slot. So do not fret if you are positioned later in the first round. You may even end up better off for it.

Last, but not least, we have pride. Pride is the OG of the seven deadly sins. It is the father of all sins and the devil’s most prominent trait. Pride is generally associated with the absence of humility. It is in this area where pride has been the downfall of many a fantasy owner, myself included. Most examples of pride occur before the draft even begins and can be a great detriment to even the best of fantasy players.

You must be confident in your ability to outduel your opponents without underestimating them. I have seen plenty of instances where someone just walks into the draft room assuming their mere presence assures them of a league title. An overconfident owner may show up unprepared because he or she thinks that they can outwit their league-mates using sheer knowledge and memory. Even worse, they may show up inebriated under the assumption that they can win at less than 100 percent. Some owners try to play it cool rather than bringing in their research materials. Failure to have proper value formulas or (at the very least) tiered rankings and projections leave these owners susceptible to those who have put in the time and effort.

Pride can kick in during the draft as well, especially after a good start. I have been guilty of believing that the room is not smart to one of my sleepers. Instead of taking my target where I valued him, I tried to stretch an extra round or two of “value” out of it. Then, undoubtedly, somebody else took him. I ended up missing out on a great value not because my evaluation of the player was off, but simply because I underestimated my fellow drafters. There is no limit to the amount of knowledge nor the number of sharks at a draft table. Just because you may be smart does not mean that others aren’t. Remember that pride comes before the fall. Do not just blindly believe in your abilities. Outwork your opponents and impose your will against them. That is how you achieve success.