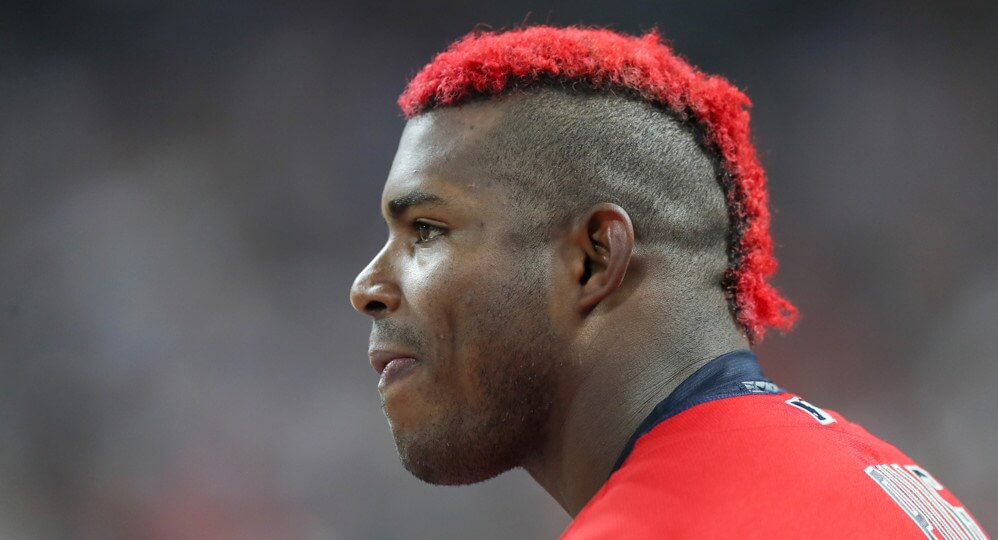 Folks, we officially have less than a week to go until we have real professional baseball! With an obscene amount of drafts in the coming days, I figured there would be no better time to divulge a few of the players I feel strongly about. Things change with a 60-game season in mind. These are a dozen players whose value has changed with the shortened season, for better or for worse. Just to be equitable I’ll break down six players to target and six to avoid.

Allow me to preface a few things before I list the players. First, there will be no relievers here. Closer values have shifted dramatically across the board. The guys with locked down jobs are skyrocketing, and deservedly so. Since I could write a whole article just about that, I’ll avoid them here. Secondly, part of my strategy is to throw batting average to the wind. Crazy things will happen over the shortened season, including wild BABIPs and averages.

A primary example is Adalberto Mondesi. Whereas over the course of a full season I’d be worried about the K’s and average, over 60 games I’m willing to say screw it. I snagged Mondesi at pick 51 in our recent Staff Mock, and I’d take him even higher. In fact, according to NFBC ADP, over 45 drafts since July 1st, Mondesi has an ADP of 30. Would I snag him there? Hell yeah, I would. His steals can win you the category, and over 60 games he could BABIP his way to a .280 average.

Just as a quick example, I pulled a totally random date range from 2019 to look at batting average. I also have to confess that picking a random date sample rather than looking at first half/second half splits, monthly splits, etc was curiously liberating. From May 21 to July 12, 2019, Mondesi hit .246 over 32 games. Paul Goldschmidt, who has a career 292 average, hit .247 over his 42 games in that span. I’m not going to totally punt average, but it will be among the least of my concerns.

Alright, so those who have been reading me this year might be aware that I have a thing for Montas. I wrote about him here. And here. Drafted him here and here. How is he still so cheap?! I’m doing everything I can to raise his ADP, but just like my ex-wife, nobody listens to me. His biggest issue heading into the full season was a lack of prior workload. That is of no concern now. Montas can give you ace-caliber numbers over this short season, and he can easily be your SP3.

We all know the song and dance with Hill, so I won’t belabor this bit. He hopefully can stay healthy for 60 games, and if he can, he can provide very, very good production over limited innings. The Twins have the easiest schedule in baseball according to 2019 W-L records, so he could even pile up some nice win totals.

I haven’t owned a share of Braun in years. He’s infuriating with his constant random missed time due to nicks and scrapes. He has put up remarkably consistent fantasy production though, and now he has the DH to call his home. He is cheap five-category production who will be less obnoxious to own in 2020. Hopefully. Avisail Garcia also gets a bump for me here, who is going just two picks ahead of Braun and should be profitable from that spot.

Puig is going with the pick immediately behind Braun. His price should soar now that he has signed with the Braves. It’s not the greatest hitter’s park, but it’s a stout lineup. He will probably bat fifth, which would allow him plenty of RBI opportunities. There’s also this excellent tweet from Alex Chamberlain that encapsulates how consistent Puig has been. 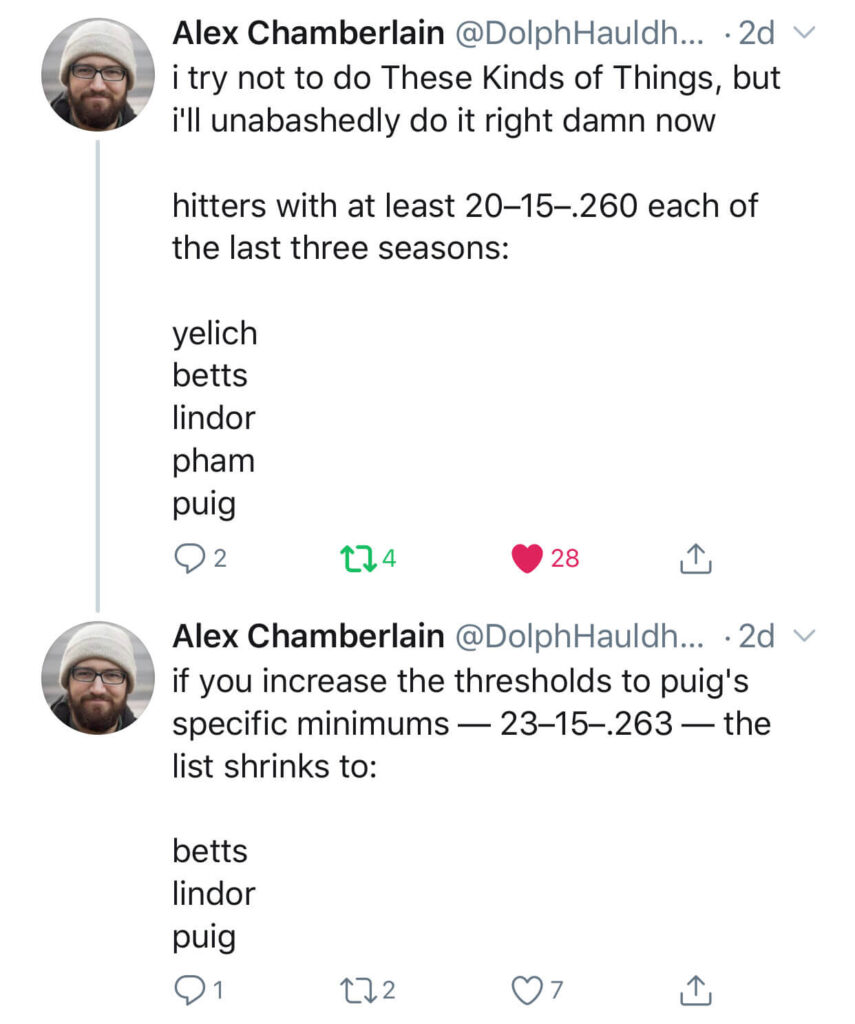 I also considered Dustin May and Ross Stripling among my players to target. I decided upon Wood since he was the cheapest. It’s anyone’s guess at this point who the fifth starter for the Dodgers will be, but these gents are all in position to grab a starting role. Frankly, all of these guys will have fantasy value, even if it comes in long relief. Take a stab at your favorite of the bunch. It’ll be worth your time.

Kendrick weirdly led the league in batting average in 2019, hitting .344 over 121 games. With the DH coming to the NL and Ryan Zimmerman opting out due to COVID concerns, Kendrick is set to soak up plenty of at-bats in 2020. If you decide to eschew batting average throughout the earlier parts of your draft, Kendrick is a nice late-round pick to try and make up some ground. He won’t give you a lot of category juice, though.

No, I’m not a complete idiot…probably. Maybe? Well, my point here is that I couldn’t bring myself to draft Trout at 4th overall in the recent Fantrax HQ mock, nor would I draft him at six. While he’s arguably the best fantasy player in the game over a full healthy season, COVID complicates matters. Trout has a child due during the shortened season, so there is no doubt Trout will miss time for the birth. Due to quarantine restrictions, he could miss two weeks if not more. Even two weeks’ worth of games is around a quarter of the season. That is a ton of missed production. I wouldn’t be able to pass him up if he fell into the second round of a standard mixer, but the missed time puts him a step behind the elite bats and arms for me.

I was already down on Pete Alonso and then he strolled into camp looking more like Eat Alonso. I’ll let you do your own image search for that one. He’s a very good hitter, don’t get me wrong, but at pick 33 I want someone whom I feel more confident in to provide me a strong batting average. I’m looking more at elite pitching or a speed demon at this point in the draft. Considering I can also wait for the likes of Anthony Rizzo or Jose Abreu around pick 74, I’ll pass on the bear this year.

I was also down on Robert coming into the full season relative to his cost. He does provide the stolen base upside I want for this sprint of a season, but the rest of the package is a huge question mark. He is very likely to strike out a ton in what will be his first taste of MLB action. In addition to that uncertainty, he is probably going to hit at or near the bottom of the order, limiting his R+RBI upside. He’s way too risky for this price point.

Who wouldn’t want a 34-year old starter coming off a 5.80 ERA and multiple injuries? I’ll admit that there is upside here for sure, but there is just too much risk for me at this ADP.

With limited innings to work with this year, you need high strikeout starters. Soroka ain’t it. He is a terrific young starter, but he’s more of a bulk inning pitcher with a middling K% who can stabilize your ratios. That’s more useful over a full season.

Brantley is a bit of a compiler, the hitting version of Mike Soroka. You can always rely on him for batting average, but not a lot else. If the BABIP gods decide to smite Brantley this year, he isn’t going to be worth a lot. If it’s the pure average you need, employ the services of cheaper options like the aforementioned Howie Kendrick, or perhaps a nice David Peralta or Luis Arraez.

Got a beef with Nathan’s 6 players to target and avoid? Let him know about it in the comments below.