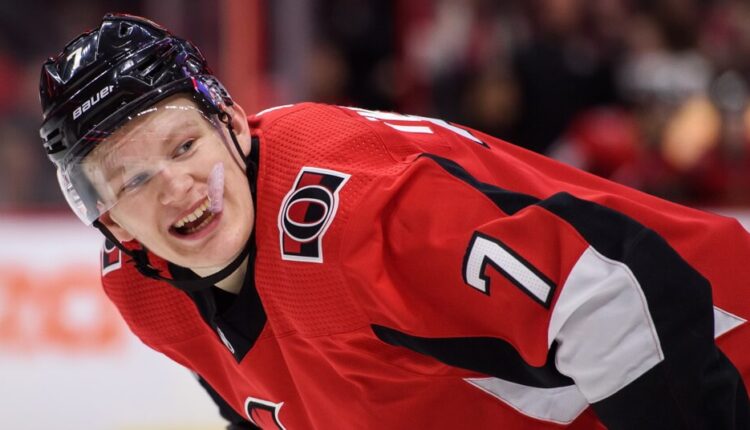 There’s nothing quite like calling and predicting a breakout season. Not to mention the success it does for your fantasy hockey team. Teams that drafted Andrei Svechnikov late or a J.T. Miller were sitting pretty in their league standings. The key to finding certain breakout players comes down to a few different things. Increased ice time? Have good line-mates? These can certainly help in finding that next breakout player so let’s take a look at a few players who are primed for success this season!

Alrighty, I’m going to start off with Brady Tkachuk here and remember breakout players come at all different levels. If you’re in a hits league Tkachuk is probably not really a breakout candidate but I still have very high expectations for the 21-year-old. Tkachuk’s overall ADP ranges pretty drastically from the fifties to eighties but he keeps climbing up my rankings to the low forties. I think he can become neck and neck with brother Matthew and enter next season as a top 25 player.

Tkachuk was top in the NHL last season with an expected goal rate of 32.6 which would put him in the top 13 in the league in goal scoring. Combine that with his elite-level hits (2nd in NHL) and shots on goal (8th in NHL) we’re talking about an elite level fantasy contributor. Tkachuk gets a boost with improved linemates this year as Evgenii Dadonov joins his line, a much better talent than Anthony Duclair. This is pretty similar to the jump Andrei Svechnikov made last year and now he’s an early 2nd round pick. Keep moving Brady up your draft boards.

If Kyle Connor can break out so can Nikolaj Ehlers right? Connor might be the more natural goal-scorer with three straight 30-goal seasons, but Ehlers has impressed himself with goal totals of 25 and 29 in two of the last three seasons. Ehlers is also the one HC Paul Maurice has been talking about more in training camp and finds himself on the no.1 line with Mark Scheifele and Blake Wheeler. Not too shabby if you ask me! Ehlers can also contribute with a couple more hits and blocks than Connor can, and his ADP is three times as low. Ehlers checks off the advance statistics box as well as he was top-10 in offensive zone start%. Another plus? Ehlers 2021 opponents in the new North Division will feature teams that were all in the bottom 16 in goals against last season. Should be plenty of shoot-outs on the way!

I’ll admit I originally had this slot saved for Kirby Dach but a wrist injury ended the young center’s season. Next man up mentality and the kicker, being linemates with point-per-game player Patrick Kane. Strome also enjoyed a mini breakout to begin last season with 30 points in his first 40 games. Part of the reason was enjoying success with his former Erie Otter linemate Alex Debrincat. Debrincat parted for the top line with Toews and the slump coincided for Strome. Now, in his sixth season, Strome is set for career highs in ice-time, PP time, and a massive bargain at his current ADP. What’s that I hear? Que the Chelsea Dagger because this top line in Chicago is going to be buzzing.

The skilled defenseman, Devon Toews, gets a chance of a lifetime here going from the slow-paced and bottom-8 scoring Islanders to a top-4 scoring Colorado Avalanche team in 2021. Toews has been a standout at camp so far and getting hefty praise from teammates. Already paired with one of the game’s new top defensemen in Cale Makar, the arrow is pointing upwards for Toews. In just his second NHL season last year, the Islanders received boosts in expected goal share and shot differential when Toews was on the ice.  Now he goes from a defense-first team to an offense-first squad and a breakout should be on the way.

Denis Gurianov came on the scene in a big way last year and turned it up a notch in the playoffs with 7- and 8-point performances in the first two rounds. Now without Tyler Seguin for a huge chunk of the season, the Stars will rely on Gurianov to lead the way in 2021. Gurianov is a great pick as not only can he score but he laid out 96 hits over 27 playoff games. Speaking of the scoring, he led the stars in goals last season with 20 and played under 13 minutes a game. Fire up the alarm bells because those minutes will sky-rocket and the goals will follow.

Chandler Stephenson hasn’t gotten his break yet, but the stars are aligning in 2021 as he’s set to open up the season on the top line with Mark Stone and Max Pacioretty. Giddy up baby. Mark Stone has been highly complementary of Stephenson throughout camp calling him the fastest skater he’s ever played with. Stephenson showed glimpses of a breakout last season when William Karlsson missed time with injury scoring five points in a five-game stretch in February. He also finished in the top-60 in high-danger scoring chances. Stephenson is checking a lot of boxes for me right now. Great team? Check. Great line-mates? Check. Increase in ice-time? Check. Breakout coming? Check!

Are you buying into these breakout players? For more help in getting ready for next season, check out the Top 10 Fantasy Hockey Rookies of 2021.