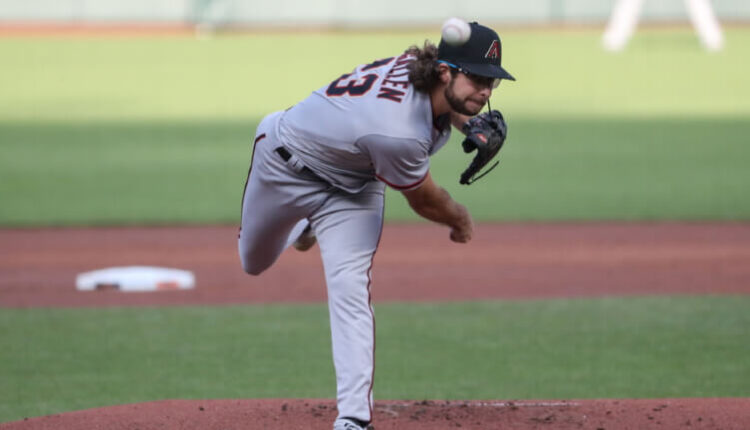 The latest in the 5 Players Who series looks at pitchers who have the ability and opportunity to take a leap forward in the strikeouts category in 2022. Each of these players struck out fewer than 185 batters in 2021 but look poised to cross 200 next season.

5 Underrated Sources of Strikeouts in 2022

A pitcher with 200 strikeouts is actually a fairly common occurrence in our three-true-outcome version of the game of baseball that is played today. With strikeouts among hitters on the rise (along with home runs), it stands to reason the best strikeout pitchers would be racking up more of them.

In 2021, 23 pitchers had at least 190 K’s. In 2019, 26 reached that number, and 2018 gave us 21. On average over the past three full seasons, each roster in a 12-team league could roster two of these pitchers to provide a solid foundation of strikeouts for a roto or points format. But where the fantasy game is won is in finding the non-obvious names who will reach that threshold in the later rounds. Think Lucas Giolito in 2019 or Frankie Montas last year.

Who are the pitchers with the skill and opportunity to get there in 2022? Let’s take a look at five.

Gallen’s 2021 season had more stops and starts than a NASCAR season due to multiple injuries, but he ended on a high note in late August through early October. Over 64.2 innings in August through the end of the year, Gallen posted an ERA around 4.00 and struck out 70 batters to just 22 walks. His K% those two months was over 25% and he posted his lowest BB/9 of the season over the last five weeks (2.4).

What Gallen simply lacked in 2021 was innings on the mound. He ended the year with only 121.1 innings thanks to elbow, forearm, and hamstring injuries. None of these proved to be long-term injuries so the hope is that Gallen can take his career 10.44 K/9 into about 175 innings in 2022 which would put him just above 200 strikeouts on the season.

Also giving Gallen a bump will be the addition of pitching coach Brent Strom who makes his way to Arizona from Houston. Strom took projects like Dallas Keuchel and Charlie Morton and turned them into stars. He turned great pitchers like Justin Verlander and Gerrit Cole into elite pitchers while with the Astros. Gallen may be his next pet project, which means we could be looking at a league-winning ace with an ADP of 148 in early NFC mock drafts.

Rogers may have lost all but one Rookie of the Year vote to Jonathan India in 2021, but that does not diminish the incredible season by a 23-year-old who took the league by storm. He finished the year with an elite 28.5% K-rate in 133 innings with a 2.64 ERA which would have been fifth-best in MLB if he qualified.

Had Rogers pitched in the final month of the season, he likely would have won the award. But he did not miss time with injury, but rather because his mother had a serious case of COVID and he was allowed by the team to be with her during that time. But 133 innings in 2021 gives us hope that he can get to 160-170 in 2022, which accompanied with a 10.6 K/9 rate puts him right at the cusp of 200 K’s next year.

Rogers was 12th among all pitchers with at least 130 innings in CSW% at 30.4%. His swinging strike rate of 14.1% was top-ten in baseball which understandably paired well with the bottom-ten contact rate he allowed (71.3%). All Rogers needs is for the kid gloves to be taken off by Miami and this could be a top-10 season for a pitcher currently drafted outside the top nine rounds.

Often overshadowed by the breakout performance of teammate Kevin Gausman, Webb quietly put together an outstanding 148-inning body of work that will now be front and center in San Francisco with Gausman out of town. Having just turned 25 a few weeks ago, we could also expect that the gains Webb made in the strikeout department could continue to grow.

Webb’s swinging strike rate also jumped from 8.8% in 2020 to 12.4% last season mostly because of increased slider usage. He deployed that pitch 30% of the time in the last three months of the season, leading him to a 5.26 K/BB rate; good for 11th in all of baseball.

Early Steamer projections peg Webb for 189 innings and 189 strikeouts, which seems very reasonable. With just a little bit of luck and earlier deployment of the slider, this could easily be a 200-K season.

Gray is surely ecstatic to have the shackles of Coors Field removed for a couple of reasons. First, he escapes the launching pad that was the park he called him the past seven seasons, moving to Globe Life Field which should play much more neutral. Second, he doesn’t have to worry anymore about adapting his pitches to different altitudes whether home or away. All of the AL West parks are climate controlled or at sea level, so the uncertainty start to start of what his pitches will do should be removed.

Gray’s curveball and changeup should finally be unleashed to move as intended on their way to the plate, which could lead to an uptick in innings for the 30-year-old pitcher.

Two times in the last five full seasons, Gray reached 185 strikeouts, both times in under 173 innings. Except for the fluky 2020 season, he maintained a strikeout rate between 23% and 26% each of the last five seasons, making at least 26 starts in five of those seasons. That is exactly the kind of consistency we need from Gray as he moves to a new home park that ranked bottom-10 in offensive park factor for 2021.

Gray’s swinging strike rate exceeded 10% each of the last four years plus he had a called strike percentage 0f at least 16% every year of his career. Assuming health and career norms in strikeout rate, we can reasonably assume 30 starts for Gray as the Rangers still are in need of pitchers who can consume innings. If it all comes together as planned for Gray in 2022, this will be the first year he crosses the 190 inning and 190 strikeout thresholds.

Drafters aren’t buying in yet, with early mocks placing him as the 108th pitcher off the board and 289 overall. There is nothing but profit potential there and Gray makes for the ideal late-round strikeout target.

McCullers is another in a long line of pitchers who can credit Brent Storm with maximizing their potential while on the Astros but is also the biggest wild card on this list. Like Gallen, McCullers is a pitcher who should have cruised past 200 K’s in 2021, but injury and lack of innings stopped him at 185 for the year. In 2022, he could pitch 190 innings, he could pitch zero, depending on an elbow injury that kept him out of the World Series.

McCullers’ slider and changeup were both graded as top-six pitches by Fangraphs in 2021, and his spin on his pitches (especially on the curveball) ranked in the 94th percentile, according to Baseball Savant. There are, as referenced above, some rumblings that McCullers might not quite be ready to start Spring Training (whenever that actually happens), but right now his opening day status does not seem to be in jeopardy. Perhaps on that uncertain news, McCullers is going pick 133 overall in early mocks, as the 51st pitcher overall. That is simply too low if he is healthy.