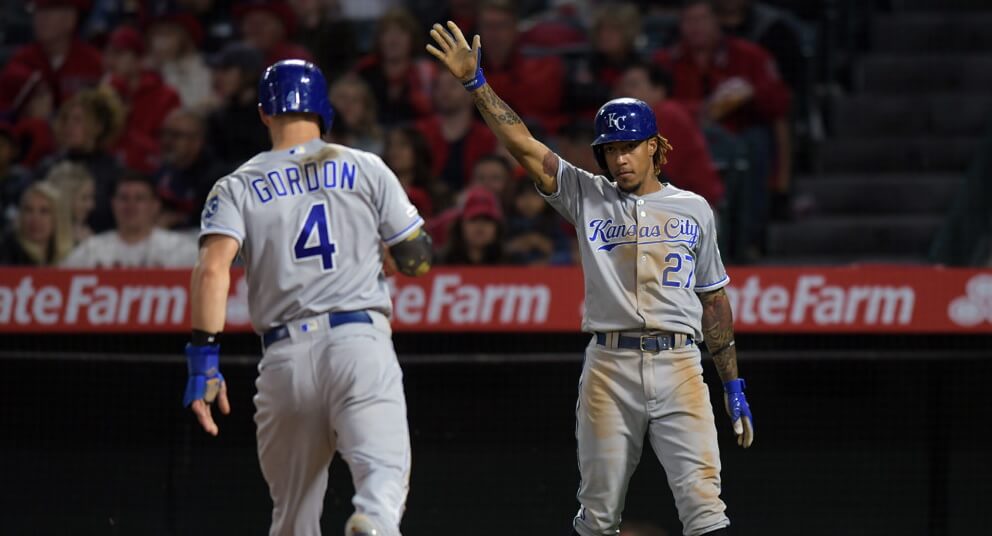 A player’s ability to ruin your fantasy baseball season will depend on several factors. Your expectations and the draft pick you had to burn to get that player are some of those.

It’s not the same to draft, say, Mike Minor, to be your fifth starter, then expecting him to be your ace knowing that he had a very bad second half in 2019 (a 4.93 ERA compared to 2.54 before the break,) and is 32 with a long history of injuries.

Of course, a fantasy season will, almost always, not be derailed by just one thing. However, drafting some of these players will likely put you in a disadvantageous position.

These Players Could Ruin Your Fantasy Baseball Season

If there is one player that can ruin your fantasy baseball season, that’s Adalberto Mondesi. In fact, he would be the poster child of the movie. He’s got that kind of (negative) potential.

Where should I start? He underwent labrum surgery in early October, and reports indicated that he would need about 5-6 months to recover. There aren’t playoffs hopes in Kansas City this year, so expect them to take it really slow with the speedy Mondesi, even if recent reports say that he is expected to be ready for opening day.

Secondly, the injury may linger during the season. You can imagine that shoulders are very important in the science of batting. Mondesi, who usually supplies between 10-15 yearly homers (he was at nine last year when he got injured, after 102 games) could have diminished power this season.

Additionally, Mondesi is a flawed hitter even when healthy. His OBP likely won’t be over .300. A blind Barry Bonds would take more walks! Bad jokes aside, consider that the speedster’s low BB% (4.3 %, compared to a 29.8 K%) and a weak KC offense will also affect his run total.

Mondesi could really ruin your fantasy baseball season because he will require a high pick. Yes, he can almost single-handedly win you the SB category, but at what cost? He has already re-aggravated his shoulder injury, he is a one-trick pony, and he plays for the Royals. Enough said.

Yes, he plays half his games in Coors Field. And yes, he hits for average and has some power and can steal a couple of bases. All true. No argument there.

When it comes to games played, however, Dahl is a lock to disappoint you. He is as injury-prone as they come: in 2017, he only participated in 19 games, all in the minor leagues. In 2018, he played 96 contests between Triple-A and the majors, and last season, he played 100 times.

Last year, I burned a high draft pick on Dahl. And guess what? He ended up missing more than a third of the season. Unless I get him late or at a discount, I won’t be making the same mistake.

Byron Buxton’s second career as a crash test dummy is going smoothly. Seriously. The man can provide a very enticing power-speed combo, but he can also help ruin your fantasy baseball season if you invest a high pick in him because of his tendency to get injured while crashing into the wall or diving in an attempt to make a spectacular catch.

Since we are on that subject, Buxton underwent labrum surgery in September. His status for opening day is in doubt.
Just last season, he suffered a left shoulder subluxation, a concussion, and a right wrist contusion. Over his career, he also had to endure a left wrist strain, a left toe fracture, a left groin strain, a left thumb strain, and several other ailments. No, we are not talking about a 31-year-old veteran. Buxton is 26.

With Buxton, the odds are higher that he’ll break a bone while going against the wall for a leaping catch. I don’t want my fantasy players to break bones. Do you want yours?

Look, I love what Buxton brings to the table as a player. His defense is jaw-dropping and he has advanced with the bat. That last sentence is what matters in fantasy. It’s just that if I see him available, I may look elsewhere due to the fact that he has surpassed 100 games played just once in his career.

Depending on the format, you may find yourself considering Jeff Samardzija to round out your fantasy staff. Let me tell you something about that: don’t. Just… don’t. He can ruin your fantasy baseball season. Things could get ugly in a hurry.

As explained here, his fastball was seemingly good, holding hitters to a .403 SLG. But expected stats, which take defense and ballpark from the equation, tell a different story, as his expected slugging percentage (xSLG) against the pitch was .516.

Maybe if you are in a very deep league and all you need is cheap innings, Samardzija can be your guy. But if you have high expectations following the aforementioned 3.52 ERA in 2019, you will get burnt. There is just no way that a pitcher can consistently pitch to a sub-4.00 ERA with a K/9 of 6.95.

Having read all this, if you draft Samardzija to be a mid-rotation arm for your fantasy squad, you got more balls than… well, I couldn’t come up with anything. You got balls and let’s leave it at that.

Look, he won 16 games! Look, he had a 3.35 ERA! Greeeeat…. well, no. That was sarcasm. While those numbers may look impressive, counting on a repeat for the 2020 season may be foolish. I’ll explain why.

Consider Jacob deGrom’s 11.25 K/9 and 1.94 BB/9. He fanned well over a batter per inning and handed out fewer than two bases on balls per every nine frames.

Dakota Hudson’s K/9 was 7.01, and his BB/9 was an elevated 4.43. He struck out significantly less than nine hitters per every nine frames, and he almost conceded a walk for every two innings. His WHIP was mediocre 1.41. I realize that it’s not very cool on my part to compare Hudson to one of the game’s premier hurlers, but I needed something for you to tell the difference.

Hudson’s fantastic 56.9 GB% and the help of his defense, more specifically his infield defense, helped his ERA to finish at 3.35. But he had a horrible 4.93 FIP and a mediocre 4.55 xFIP.

Hudson wasn’t able to limit hard contact very often. The sinkerballer was in the 30th percentile in average exit velocity and in the 28th percentile in hard-hit rate. That loud contact led to a somewhat elevated 19.8 % HR/FB. In other words, one of every five flies against Hudson left the park.

The Cardinals’ hurler already had quite a bit of luck for someone who relies so much on grounders (.274 BABIP, which should be closer to the .300 neighborhood.) He already showed that he can’t strike out more than the 7.01 K/9 he showed in 2019 and at Triple-A in 2018. He has walk issues. Let someone else invest in him on draft day. You can find cheap innings elsewhere, even with Wins potential. Believe us. Don’t let Hudson ruin your fantasy baseball season.