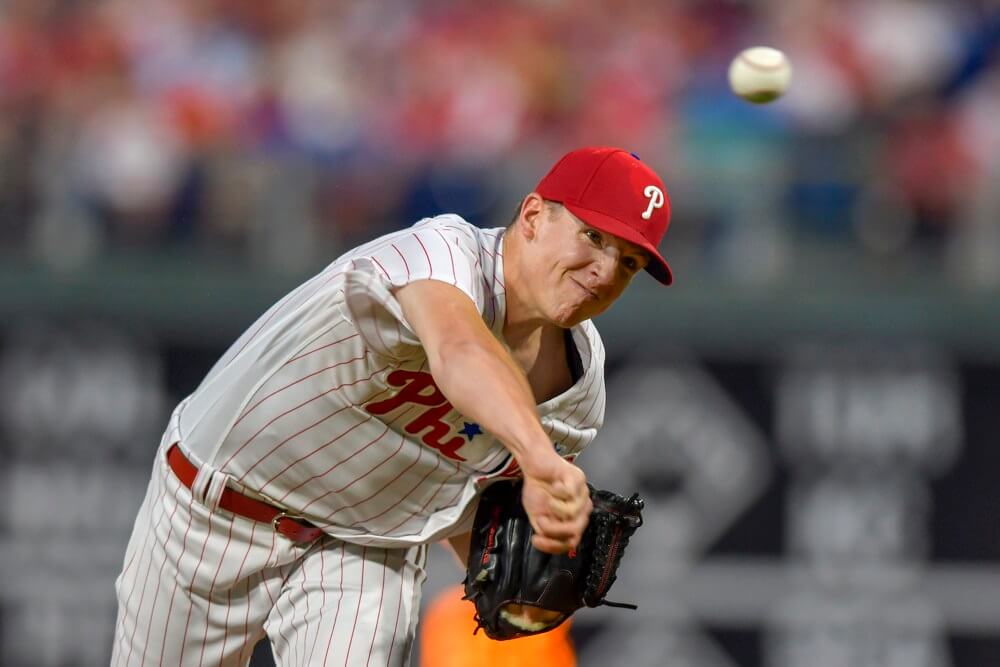 A couple weeks ago I wrote an article entitled 5 Potential Pitching Busts Who Will Be Overdrafted in 2019. In that article, I examined pitchers whose 2018 SIERA’s most exceeded their ERA’s. If we trust the SIERA metric (read more about it in that article), this gave us a list of pitchers who are potential risks to perform at significantly lower levels in 2019. Some of the names on that list included Miles Mikolas, Kyle Freeland, and Mike Foltynewicz, a group of pitchers a lot of people are pretty high on. Shortly after that article went live, I got several requests to show the other end of the spectrum; pitchers whose  SIERA’s were most under their ERA’s. Theoretically this will provide us with a list of potential pitching values for the coming season. So, here we are.

So I’m gonna treat this a little different than the previous piece. Last time, I just showed you the five pitchers I finally decided on including. This time I’ll give you a little more context. In the table below are the Top 10 pitchers in SIERA/ERA differential in a positive way. I bolded the pitchers I’m most comfortable in drafting. The others are also likely to see some level of positive regression, but for various reasons, I’m not on board with in 2019. I’ll hit on those pitchers below the list.

One thing that jumps out at me is the presence of two Colorado Rockies pitchers on this list. Remember, Kyle Freeland was on the opposing list. The difference? Strikeouts. All other things being equal, pitchers who get a lot of strikeouts generally do better. Pair that with the excellent control displayed by both Jon Gray and German Marquez and you see why SIERA seems to favor them. Well, there’s also the fact that Gray ended the season with a 5.12 ERA. That probably makes it a little easier for him to make this list.

Pitchers Who Didn’t Make The Cut

Before I get to the five pitchers I finally decided on here’s a bit of the reasoning I used to filter out the other five.

I like Zack Godley and enjoy watching him pitch, but until he gets that 4.1 BB/9 down, it’s going to be hard for him to make any huge leaps.

German Marquez had a great year, and according to SIERA, it could have been even better. Sounds good, but I have doubts about any pitcher in Coors repeating last year’s numbers, much less improving. Can he be the only pitcher since Ubaldo Jimenez to put together two good seasons in a row in Colorado? Could be, but it won’t be on my team.

I can buy into Porcello’s 3.77 SIERA, but I’m not buying into a repeat of his 8.9 K/9.  It’s almost a full point above his previous best. It’s also unlikely Porcello slides too far in any draft. He’s almost guaranteed 15-plus wins and everybody knows his name.

I need to see Jakob Junis pitch. I’m old school that way. I dig into all the metrics, but I also want to see a pitcher live. I also question whether he can repeat his 8.3 K/9.  It was only 7.3 in 2017 and it was pretty spotty throughout his minor league career. Being on a team likely to lose close to 100 games is also an issue.

Here it is, the moment you’ve been waiting for… or something like that. Before I dig into these pitcher, I need to give a caveat. Yes, I see these pitchers as value picks. That doesn’t mean I consider them anywhere near the top tier of starting pitchers. It just means I think they’ll outproduce the investment it takes to roster them in 2019. If used the right way and drafted at the right time, they can be an asset for your fantasy team. If that sounds half-hearted it’s because it is. Some years the pitching values offer huge upside and can pay off big. This year I think the payoff will be less extreme.

If Bundy were to leave Baltimore for a better team and more pitching friendly division, it would make this recommendation a lot easier. Pitching for the Orioles in the AL East is a tough sell, but I’m buying in on a trial basis. Bundy’s 5.45 ERA is hard to explain away, but much of it can be blamed on a 17.8% HR/FB that is more than six points higher than 2017. His .316 BABIP allowed was a jump of.043 from 2017 while his 69.3 LOB% was the lowest of his Major League career.

Meanwhile with all this bad luck, he put up career bests in K/9 (9.65) and a solid BB/9 of 2.92. An xFIP of 4.28 is leaning the way of SIERA in this battle of metrics. Bundy is never going to be an ace, but he should be an acceptable streaming option in 2018 and if the Orioles deal him away as they might, he instantly gains value.

I am not a fan of using Rockies pitchers in fantasy baseball. I talked about in the previous overdrafted pitchers article. Every few years a Colorado pitcher emerges to produce a solid all-around fantasy season. Almost without fail they fade back into the fantasy mist the following year. In 2018, there were two such pitchers in Kyle Freeland and German Marquez. Gray? Let’s just say he had a bit of a meltdown, even getting sent back down to the minors for a little tuneup.

So I have to see a lot in a pitcher to make a recommendation under these circumstances. That’s A okay because Jon Gray does a lot of good things. A 9.6 K/9 to go along with a 2.7 BB/9? That leads to positive fantasy value in almost every instance. And xFIP agrees with SIERA in the case of Jon Gray. Gray’s 3.47 xFIP is even lower than the 3.94 mark SIERA predicts. Though I’m probably a bit selective in when I use any Colorado pitcher, Gray actually has a slightly better home ERA than road over his career. Gray will never be a fantasy ace in Colorado, but his 2018 struggles were mostly due to an 18.1 HR/FB rate that jumped seven percentage points from 2017, and a 67.9 LOB% that fell almost that same 7.0 percent. Coors will always be a factor, but if you’re considering using Freeland or Marquez in 2019, then Gray should be in that same conversation.

It seems like there’s been a little back and forth between Pivetta and Zach Eflin over the past couple of years about which one is going to really break out. On the surface, it appears Eflin won the battle in 2018, though he still didn’t quite get over the hump. With a little luck things could have ended very differently for Pivetta who shaved a full walk per nine from his 2017 rate.

If he maintains that improved control and gets the long ball under control (15.8% HR/FB) the ERA will look much better and an improving Phillies team is going to help win him a lot more games. This is another case where xFIP (3.42) is even more optimistic than SIERA (3.51). Pivetta has not been entirely ignored in early drafts as he’s being taken within the top 50 starting pitchers according to Fantrax ADP, but there’s plenty of room for profit at that cost.

Luis Castillo? Haven’t we heard this story before? Wasn’t he supposed to already be an ace posting huge strikeout numbers and winning our fantasy hearts? Why yes, yes he was. Some of that luster got lost along the way and almost all of it is due to the long ball. Obviously, The Great American Ballpark has a lot to do with it, but Castillo has back to back years of HR/FB rates over 17%. He has to make adjustments.

The good news is he’s shown signs that he can adapt. While Castillo’s strikeout rate dropped to 8.75 in 2018, so did his walk rate. He brought that down from 3.22 in 2017 to 2.60 last season. Again, good things typically happen when you pair solid strikeout rates with excellent walk rates. Second half stats are not the Holy Grail, but Castillo seemed to really put things together in the second half of 2018 with a 2.44 ERA (5.49 first half) and a 9.36 K/9. Of all the pitchers on this list, Luis Castillo may be the one most likely to enter fantasy ace territory. A better team and more friendly home ballpark would help, but he’s capable of being a solid Fantasy No. 2 starter as it stands now.

We always knew Heaney had potential and I knew he had a solid season in 2018. What I did kind of forget about though, was his strikeout potential. Yeah, the K/9 look gaudy in 2016-17, but that was in a combined 27.2 innings. The last time Heaney threw more than 50 innings he struck out a measly 6.64 batters per nine innings; and that was in the National League getting to face opposing pitchers a couple times a game. Heaney posted exactly a strikeout an inning in 2018 and this time it came in 180 innings.

Why the shaky 4.15 ERA then? Like many of the pitchers on this list, it was mainly due to the long ball, something Heaney has had issues with throughout his career. The good news is that while his 15.2% HR/FB rate is not good, Heaney did allow a career-low 35.1 FB%. Heaney has been around awhile now, but let’s not forget that prior to last season’s 180 innings, he’d pitched a total of 162 innings. He’s basically entering his third MLB season. The home run may continue to be his bugaboo, but he’s still learning what works and made huge gains in 2018. I see at least another small step forward in 2019.

There you go. That’s the counterpoint to last week’s list of over-drafted pitchers based on SIERA. The pitchers on this list are not my absolute favorite pitching sleeper for 2019. In fact they’re a quiet and unassuming bunch. These pitchers are however, some of the better pitching values you’ll mostly be able to pick up later in your drafts. I’ll break down my favorite pitching sleepers a little later this spring and I promise they’ll be of the more exciting variety.