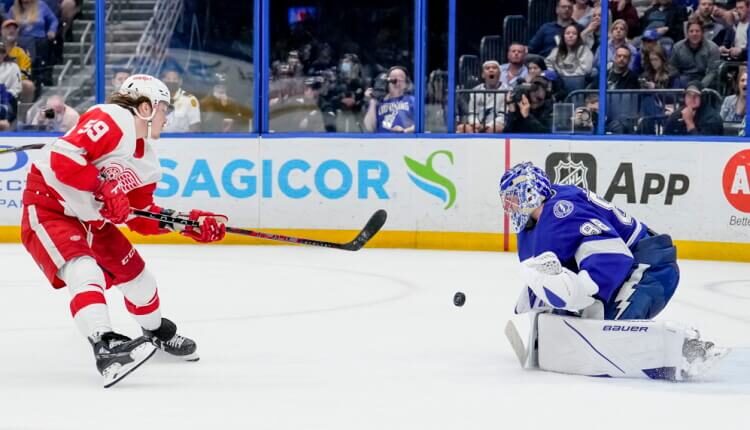 In every draft, in every sport, there are the late rounds where sneaky fantasy players will have their eyes set on some players that others either (a) don’t know about or (b) don’t believe in. Honing in on the fantasy hockey late-round bargains is no different. You aren’t going to necessarily rely on these guys to carry you to fantasy hockey greatness, but you can rest in smug satisfaction that at some point, one of your league mates will scour the waiver wire looking for a player that you drafted. Sometimes, they even let you know about it.

What is considered a “late round” will obviously change depending on your league format and host site. For the purposes of our article here, we will go with a Fantrax standard league: 12 teams, a 16-round draft to fill five starting forwards, three starting defensemen, and two goalies with a six-man bench. This means 192 draft picks. If we consider Round 12 to be “late round,” then we’re looking for players with an ADP of 144 or higher.

One of the “watermarks” to consider when looking at skaters to round out your squad is a 60-point season. Last year, Bertuzzi reached 62 in only 68 games after having played in only nine games the year before. I am high on the Red Wings this year as a team that improved greatly in the offseason and welcomes back players who have put some experience under their pads. The 27-year-old Bertuzzi will be on the top line for both full strength and on a power play, and there is no reason for him not to score frequently, possibly getting to the 70-point mark. If you can get that in the 12th round, you take it.

In 2021, the young Mr. Dahlin began to show why he was the No. 1 pick in 2018. He reached a career-high of 53 points as well as hits (121) and blocked shots (91) while averaging 24 minutes of ice time. He is on the top line in all scenarios, and now that the Jack Eichel drama has passed, the Sabres may be able to develop a personality as a squad. Dahlin is a talented scorer who can fill the stat sheet for fantasy managers. He may not reach the 60-point mark, but he is also the one in the 13th round with the best shot at soaring past it. He is a fantasy hockey late-round bargain.

Caufield ended his season with a hat trick against the Panthers, which wrapped up a stellar second-half campaign. Unfortunately, the first half of the season also existed. He was a popular sleeper/rookie pick during drafts last year and was available on waivers shortly thereafter. One of my favorite draft plays is buying the discount that fantasy managers apply to the previous year’s darling when that darling doesn’t work out. Montreal will give him increased playing time (upwards of 20 minutes per night) on the top line. With Caufield, we’re aiming for the 50-point mark on a Habs team where he is at the base of its identity and should still be available in Round 13 or 14.

Once we get to the 15th round, we’re really focused on filling out our rosters, especially in category leagues. Enter stage right: Tanner Jeannot. The 25-year-old left wing will stuff your Hits category to the brim and then some. Last year, he racked up 318 hits and 64 blocked shots. The hits were second to only Radko Gudas (who is currently going undrafted), and Jeannot is projected to play on the third line for full strength and the second line for power plays for a good Predators team. If he duplicates his 130 PIM as well, he could be a fantasy hockey late-round bargain without question.

As I discussed in my fantasy goalie rankings last week, Husso lands in the Top 24 heading into the season. Fresh off a year where he toppled Jordan Bennington to be the No. 1 goalie in St. Louis, the 27-year-old netminder signed a three-year deal in Detroit. He tallied a 2.56 GAA and a .919 save percentage; these are numbers that seem repeatable for the 2022-2023 season. As I mentioned above, the Red Wings have made a number of moves to tighten the lines in front of Husso, which should help him be an absolute bargain in the 15th round of your drafts, particularly in two-goalie setups.

If you have any thoughts or additions to this, please feel free to contact me on Twitter at @thewonkypenguin or shoot me an email at [email protected] I am stoked for hockey to return, so keep checking back for more info in our Fantasy Hockey Draft Kit as well. And, as always, good luck!