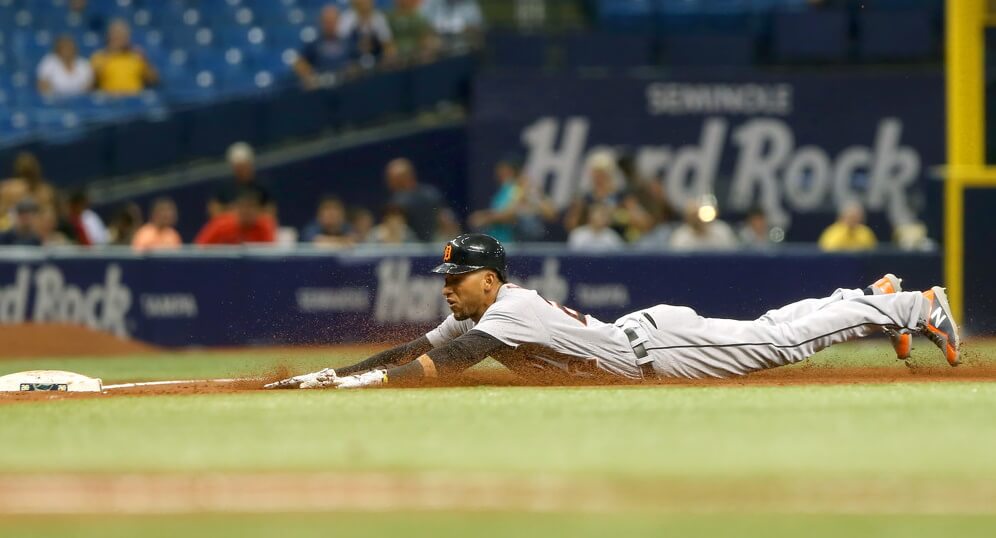 Every single year I feel it’s the same issue. Steals seem scarce and people tend to reach way too early on speed in drafts. This makes most fantasy owners feel they’re leaving drafts with already a huge hole in their lineups. Well, you’re in luck! I will highlight five steals sleepers you can target at the end of drafts in 2020 to help fill a void if you miss out on steals early in your drafts.

Keep in mind, rosters will change from what they currently are. Don’t worry, I’ll be updating and adding to this list throughout the offseason and into next season. Heck, this is just part 1! I have quite the list of names to write up but don’t let me get ahead of myself. Let’s focus on this first list of five.

The ultimate goal is to give you a head start and give you names to store away for a rainy day.

With that said, let’s get to it.

Nick Solak was traded to the Texas Rangers mid-season and flourished with his new club. He came up and played 33 games this season. Within those 33 games, Solak amassed 5 home runs, 2 stolen bases and a triple slash of .293/.393/.491. He has always flashed the batting average and on-base skills all through the minors.

His walk rate of 11.1% and K-rate of 21.5% during his quick stint falls in line with what he has shown in the minors as well. With sprint speed in the 89th percentile and the on-base skills he is flashing early on in his career I believe 20 stolen bases is definitely a realistic outcome. The on-base potential is backed in the metrics as well with an above-average chase rate of only 26.3% and a SwStr% of only 8.5%. That patience will take him places.

Unfortunately, Nick Solak only stole 7 bases total in 2019 but he has flashed the speed previously with a 21-steal season as recently as 2018 in Double A. That was only in 126 games. He is mixed league relevant and has a sneaky 20 plus steal upside.

Anyone who knows me knows I’ve been on Carlson since he began breaking out in Double-A midseason. I can’t get enough of this guy and he’s not even on the MLB roster… YET! There have already been reports that he will have the opportunity to compete for a starting spot in the Cardinals outfield in 2020 and I believe the talent is there to earn said spot.

He’s another player where the walk and K-rates stand out. Not to mention the on-base skills. Other than rookie ball in 2016 where Carlson posted an OBP of .313, he’s never posted an OBP less than .342 at any stop after that. In 2019, He broke out in a big way in the power and speed departments.

If the on-base skill holds up as I anticipate, and you pair it with the speed tool he’s flashing, I think you can bank on 20 steals. He managed 20 steals between two levels of minor league ball this year. Those 20 steals came in only 126 games. I would say a 30 steal season is his ceiling but there’s a chance he doesn’t start with the big league club and if that’s the case, then 30 won’t occur. Regardless he’s a lotto ticket I’m taking with a final pick in all drafts next season as of now and hoping to cash it.

Victor Reyes is the projected leadoff batter for the Detroit Tigers and offers upside in batting average and stolen bases. You will likely be able to grab Reyes at the end of most 2020 drafts and maybe off your waiver wire in shallower leagues.

Victor Reyes stole 19 bases in 2019 when combining his Triple-A numbers and his stint with the big league club. He is on a team in full rebuild mode with not much around him so it should lead to a green light on the base paths to assist in manufacturing runs. He has sprint speed in the 91st percentile as well. The speed is real. The high BABIP may be sustainable in part due to the said sprint speed. If there is one flaw in his profile, however, it’s his chase rate.

Reyes has higher chase rate than you’d like to see but you can’t ignore the rest. His plate discipline profile is otherwise great. If he is a bit more patient, with the amount of contact he makes I expect the production across the board to increase. Victor Reyes will be someone I will watch throughout the offseason and will almost always grab with a final pick in drafts.

Sam Hilliard came on strong to finish the 2019 campaign. He actually had a breakout as a whole in Triple-A this season with 109 runs, 35 home runs, 101 RBI and 22 SB. This was accompanied with a triple-slash of .262/.335/.558. He came up and continued the hot season and was a nice addition for teams down the stretch.

Outside of rookie ball, Hilliard has produced at least 23 steals every season in his career. It isn’t too much of a surprise with sprint speed in the 93rd percentile of the league. He also walks at about a league-average clip.  He has an above-average O-Swing rate at 28.8%. If he improved his contact rates that would cut down on the strikeouts. This would all go toward improving the OBP, which would ultimately lead to an increase in stolen base opportunities.

Playing time will likely be the main concern with the likes of David Dahl returning. Not to mention having to fight off the likes of Ian Desmond and Garrett Hampson. It is a crowded situation that will play itself out. If Sam Hilliard can hold onto a starting spot entering 2020 he is a great steals sleeper with all-around upside as well. It also never hurts to have Coors to call home.

As if the last few players weren’t deep enough names to discuss, I now present to you Magneuris Sierra of the Miami Marlins. This is the deepest of all the steals sleepers on this list. This kid can straight fly on the base paths. He has sprint speed in the 98th percentile and has a 30-plus stolen base season in the minors. The Marlins are another team that has nothing to play for and may just let these young kids play their game. Well, Sierra’s game is stealing bases.

He came up for a cup of coffee and stole three bases during that span this season. Sierra had 36 stolen bases when combining his minor league and major league totals. He profiles similarly to Victor Reyes. Another player with high contact rates on pitches inside and outside the zone, who barely walks but also rarely strikes out.

His walk rate routinely sits around 4-5 percent and his K-rate is 16-17 percent. He offers little outside of speed. He’s only relevant in NL-only formats at this time and your deep draft and hold formats.

Got more steals sleepers for 2020 fantasy baseball? Drop them in the comments below. Don’t worry, we can keep a secret. No one in any of your leagues will ever know.