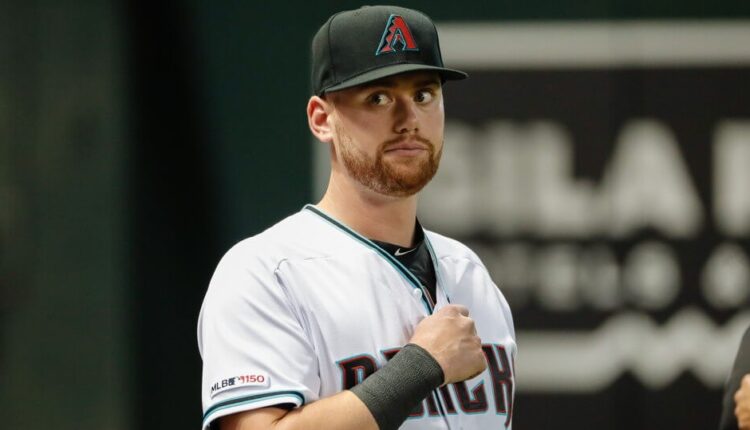 The catcher position is annually one of the tougher positions to figure out. Although I think the catcher pool feels deeper this year than most, there is still a big drop in potential and production at the position. The other issue is finding value at the position based on ADP. For lack of a better term, today I’m looking at my favorite catching sleepers for 2020.

These are five of my favorite catching sleepers to target entering the 2020 fantasy baseball season. Let’s get to it.

Carson Kelly is one of my personal favorite targets at the position this year. I have targeted him a number of times and really like the potential to break out this year. He showed us glimpses of the upside in 2019, and now with no competition for playing time and a clean bill of health I expect a good year out of him.

Carson Kelly has really good plate discipline and it jumps out at you right away. He has really improved the walk rate over the last few seasons and in 2019 it was at 13.2%. He may have become a bit too patient because the K-rate also took a jump compared to what his track record suggests it should be. It was 21.6% which was still league average.

What backs up the good strikeout and walk rates are the plate discipline metrics. Here is how they line up against the league average.

You can clearly see he is very selective at the plate. His swing rate is below average but so are the O-swing rate and the swing strike rate. He may be someone who benefits from being a bit more aggressive. The plate discipline is impressive and what also seems to be a tangible change in the profile is the power production.

Kelly lifted his launch angle last season to a career-high 14.3 degrees. That is an increase of 8.9 degrees from 2018. With the increase in launch angle, came an increase in both FB rate and pull rate. These are changes you like to see and help support the power breakout.

Lastly, you can see the improvement in barrel rate as well with a 6.5% barrel rate in 2018 that improved to 8.9% in 2019. There is a lot of underlying reasoning to buy into the power gains and when you pair that with the good plate discipline, it should add up to a solid overall hitter.

Take everything I said about Carson Kelly and his plate discipline and picture the complete opposite. That is what you’ll see when it comes to Jorge Alfaro. So the question is, why do I like him? Well, although he strikes out too much (33.1% K-rate) and lacks in the walk department (4.7%  walk rate), he offers a lot of upside and potential in the power and speed department.

Yes, I said speed. Check out the speed for yourself.

Alfaro has a sprint speed in the 90th percentile. He has the same sprint speed as Cody Bellinger and is ahead of names like Tommy Pham and Tim Anderson. I too find that very difficult to accept but the numbers don’t lie. He also stole 3 bases in 2018 in just 108 games and 4 bases last year in just 130 games. This suggests 5 to 7 stolen bases over a full season is possible. That may not sound like a lot but getting a handful of steals from your catcher slot can make all the difference in the category.

The BABIP is often cited as unsustainable. I agree to a point. Alfaro posted a .363 BABIP in 2019 and has a career mark of .385. The high ground ball rate of 52.7% and that sprint speed lend itself to the BABIP. That ground ball rate is atrocious but it is something a swing change would help with.

Not to mention he hits the ball pretty hard with a hard-hit rate of 44.8%, which is good enough to be in the 83rd percentile. This rolls right into my next point of the 20 home run potential. He put up 18 last year and that was in just the 130 games he played.

Unfortunately, his launch angle dipped to 4.7 degrees last season which was almost half of the previous 2 years. If he can correct the launch angle, the batting average and home run potential both could see an increase. But as I stated, the BABIP can be somewhat sustained  due to the hard contact and speed.

Another factor in his favor is the lack of competition for playing time. I do not see Cervelli being more than the rest day backup. There are no playing time concerns which is a big deal for catchers. With all that said, I like Alfaro this year and I think we have yet to see the best from him.

The Detroit Tigers quietly signed Austin Romine to a one-year deal this offseason. That should come with no competition for playing time. Well, at least for the first half. There is a strong possibility if Romine gets going they may seek to deal him at the halfway point so they can get some form of return to assist in their rebuild. You cannot exactly count on a player being traded but there is a good chance of it in this situation. I digress, the fact is there is solid value to be had here even if it is truly for just the first half.

There is 20 home run potential in this bat. He actually increased his launch angle to a career-high mark of 10.4 degrees. With it, he also increased his pull rate to a career-high mark of 31.1%. The changes did not stop there. He posted his lowest strikeout rate since 2016 at 20.8% and had a career-best barrel rate as well at 6.7%. The changes in the strikeout rate likely are due to the change in his overall approach. Romine increased his swing rate so being more aggressive paid off.

He increased overall contact rate with the biggest jump coming in O-contact gaining 7 percentage points from 2018 to 2019. There were changes all through the profile that allow for some optimism entering 2020. Romine should only be drafted in AL-Only formats or two-catcher formats as of now. It would not surprise me at all if he is a streaming option early in the season.

I love this move for both the Los Angeles Angels and Jason Castro. This is a team going for it and although it is only a one-year deal, I believe he will be the starter all year depending on his performance. Castro may not be much for batting average but with a walk rate of 11% or better in each of the last three seasons and 10% for his career, there is more appeal in OBP and points leagues.

The strikeouts do put a ceiling even in those formats though. Ultimately, he is a cheaper version of Robinson Chirinos which has value in your deeper formats. He may actually have more batting average upside than Chirinos as well. Again, we are talking AL-only and deeper, two-catcher formats.

This is just a true deep-league dart throw. The Pirates have moved on from both Francisco Cervelli and Elias Diaz and that only really leaves Jacob Stallings for playing time in Pittsburgh. He has shown us good plate discipline in his limited opportunities. This past season he had a K-rate of 19% to back that up. Outside of there being some batting average floor, the rest is underwhelming but he does offer 10 or so home run potential and is a starter with no playing time concerns. He can be your third catcher in two-catcher formats or a fallback number two catcher. He has NL Only appeal as well.