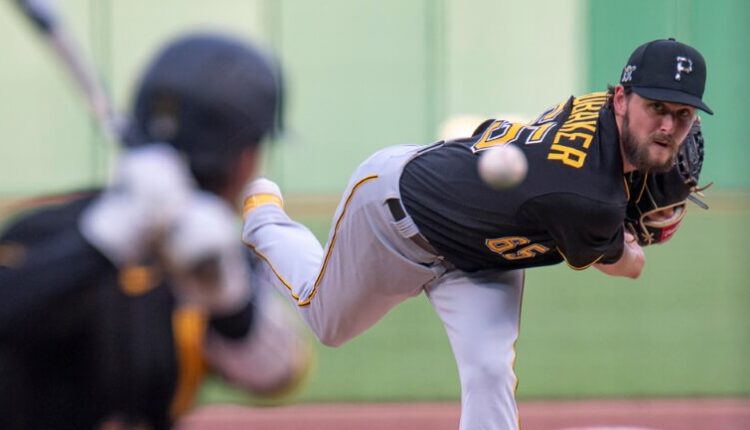 Sometimes we’re passionate about the players we analyze. Other times, we find players that look like potential sleeper pitchers to break down. That’s the case with the following trio of Bailey Ober, Joe Ryan, and J.T. Brubaker. Throughout the 2021 season, all three provided streamer-worthy value, especially in 15-team leagues.

With Ober and Ryan, we have smaller samples, but Ryan came in with the most hype. Can Ober and Ryan build on their 2021 season? Are we considering a Pirates pitcher? We’ll break down all three players to find out if they’re potential sleeper pitchers in 2022.

During my in-season buy or sell installments, I discussed Bailey Ober in early September. Admittedly, I hadn’t heard of Ober before the 2021 season. However, the 6-foot-9 righty burst onto the scene down the stretch like a regular streaming pitcher in 15-team leagues. In eight games started, Ober finished with at least five innings pitched with two or fewer earned runs. Unfortunately, Ober only notched one quality start as the only appearance with six innings in 20 total starts.

Bailey Ober relies heavily on the four-seamer (58%) with a 92.3 mph velocity. The four-seamer remained his best pitch with a -8 Run-Value. Ober sprinkles in the slider (18.4%), changeup (13%), and curveball (10.6%). He doesn’t blow hitters away with velocity or filthy stuff, but he relies on command and control.

Interestingly, Ober boasts three pitches with a double-digit swinging-strike rate, except the changeup with a 9.4% SwStr%. Ober also pitches to contact with an 85-87% Z-Contact% with every pitch while using the four-seamer and slider to elicit fly balls.

Ober uses the slider against same-handed hitters with 234 of 272 sliders thrown. Meanwhile, Ober throws the changeup as a weapon for lefty hitters with a .300 wOBA allowed – the best amongst all four pitches. Interestingly, Ober’s changeup boasts above-average horizontal movement with two inches more than the average. However, we know that horizontal movement typically elicits weak contact. That makes sense since the changeup results in the lowest swinging-strike rate.

Is Ober a Potential Sleeper Pitcher?

Although Bailey Ober’s arsenal doesn’t wow us, Ober relies on control and command. However, Ober possesses three pitches with a double-digit swinging-strike rate that he throws in the zone around half the time. Ober lives on the edges and thrives in the shadow area.

Early STEAMER projections have Ober with a 4.51 ERA, 1.27 WHIP, 23.3% strikeout rate, and 6.4% walk rate in 158 innings pitched. STEAMER regresses the 79.8% LOB% to 71.9%, with the .295 BABIP allowed remaining almost identical. Unfortunately, the Twins rotation isn’t great, with Ober projected as their ace pitcher.

That said, the Twins should let Ober throw 150-175 innings, but he only reached six innings once in 2021. Overall, Ober boasts a decent arsenal, K-BB%, and above-average command and control that warrants a mention as one of the potential sleeper pitchers.

Joe Ryan uses a similar arsenal to Bailey Ober with the fastball-heavy approach. Keep in mind that we’re dealing with a tiny sample of five games started. Ryan uses the four-seamer 65.8% of the time with a 91.2 mph average velocity. Interestingly, Ryan threw all 66 sliders to right-handed hitters at 16% of the time with a 35.3% whiff rate.

On the flip side, Ryan tosses a changeup 10.4% of the time, primarily to lefties. Unfortunately, the changeup doesn’t appear like a helpful pitch as it finished with a .600 SLG, .358 wOBA, and 14.3% whiff rate. But again, it’s a small sample of 43 changeups thrown. Overall, none of Ryan’s pitches stand out movement-wise.

Is Ryan a Potential Sleeper Pitcher?

As noted earlier, the Twins have a depleted rotation after trading away José Berríos and Kenta Maeda on the injured list. That said, early STEAMER projections have Joe Ryan throwing 166 innings with a 4.05 ERA, 1.24 WHIP, 24.6% strikeout rate, and 6.8% walk rate. That takes into account the BABIP rising to .290 and LOB% positively regressing to 72.2%.

STEAMER appears to have slightly more optimism for Ryan than Ober from an ERA standpoint, with the other metrics looking similar. However, in the small sample of 2021, it’s hard to have a ton of confidence in Ryan, given the arsenal and profile. Both Joe Ryan and Bailey Ober intrigue me, but we don’t want to over-invest in the Twins rotation.

When sorting the FanGraphs Leaderboards, J.T. Brubaker popped out with a 16.9% K-BB%. Although it’s hard to like anyone pitching on the Pirates, Brubaker possesses an intriguing profile with a slider that elicits a ton of whiffs. In 2021, Brubaker finished with a 5.36 ERA, 1.29 WHIP, 24% strikeout rate, and 7.1% walk rate in 124 1/3 innings pitched. On a positive note, Brubaker tossed seven quality starts with four additional appearances with five innings and two or fewer runs.

Brubaker struggled with the home runs with 22.4% HR/FB% and 2.03 HR/9. It’s hard to compare with the career average of 20.4% HR/FB% and a 1.78 HR/9 since Brubaker only compiled 171 2/3 innings pitched over the past two seasons. In the minor leagues, Brubaker induced a ground ball rate around or above 50% in two seasons at Triple-A, which coincided with a lower home run rate. Brubaker’s 4.00 xFIP takes the league average home run rate into account. Although Brubaker’s sinker that he uses 24.6% of the time resulted in a 55.5% GB%, it’s not an overwhelming amount like Ranger Suárez with a career 68.2% GB% on his sinker.

Although Brubaker’s slider elicits a 39.6% O-Swing%, 23.8% SwStr%, and 42.5% Whiff%, it doesn’t stand out movement-wise. Brubaker’s slider doesn’t have above-average vertical or horizontal movement. However, one reason to explain the improved effectiveness from the 2020 small sample where it elicited a 16.5% SwStr% and 36.9% Whiff% involved Brubaker increasing its usage and lowering the sinker usage. Brubaker also pinpoints that slider down and away to righties. Most of the whiffs on all pitches occur in that area, where he locates the slider. 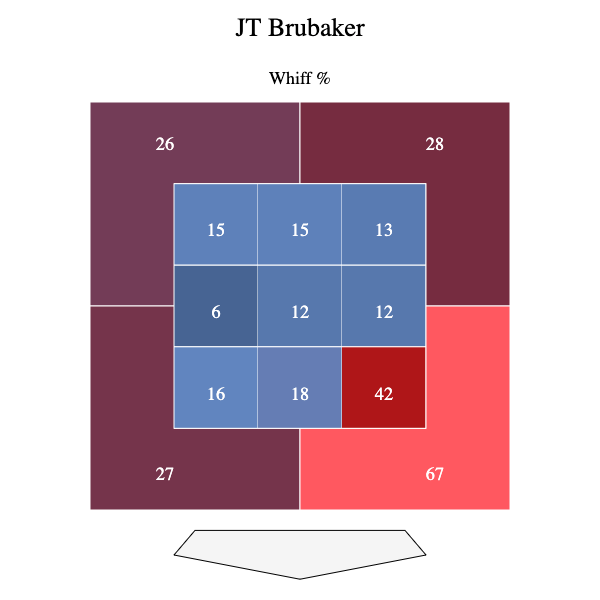 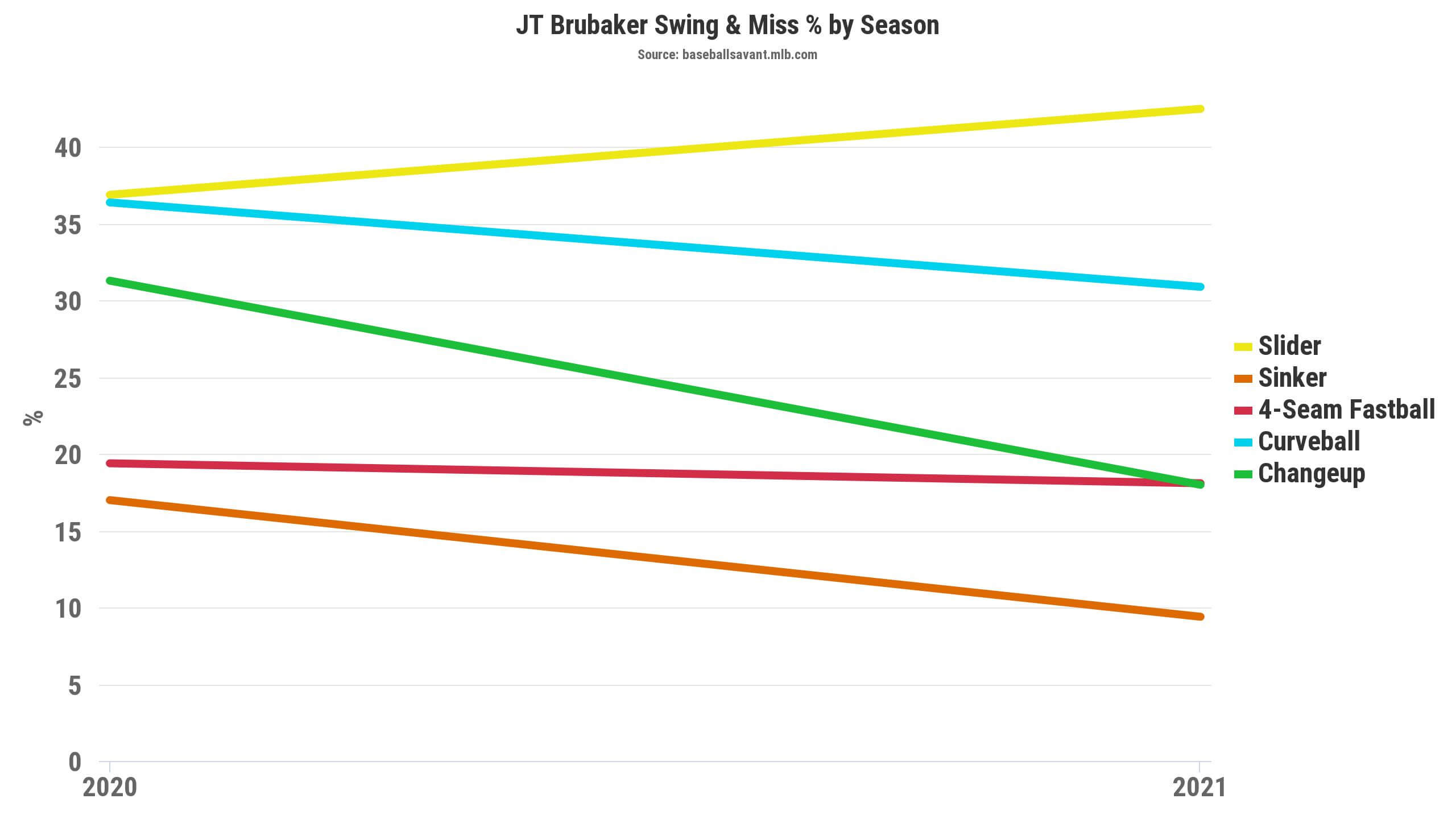 There’s a possibility that Brubaker could increase the curveball usage with a 30.9% Whiff% and .315 wOBA allowed. Although the curveball boasts a spin rate in the 88th-percentile, it again doesn’t stand out movement-wise. Outside of the slider and four-seamer, Brubaker’s whiff rates on the three other pitches decreased.

Is Brubaker a Potential Sleeper Pitcher?

Sometimes we start the research with a hopeful mindset, and then it turns into less optimism. That’s the case with J.T. Brubaker. The team context, one effective pitch, and unexciting profile doesn’t lead us to consider Brubaker as a potential sleeper pitcher in 2022. Like the Twins rotation, the Pirates will roll out the likes of Steven Brault, Dillon Peters, Mitch Keller, and Bryse Wilson.

One final reason for optimism in 2022 involves Brubaker’s ability to thrive in the shadow area. If Brubaker can improve the Run-Values in the zone and maintain success in the shadow area, he could leap forward in 2022.