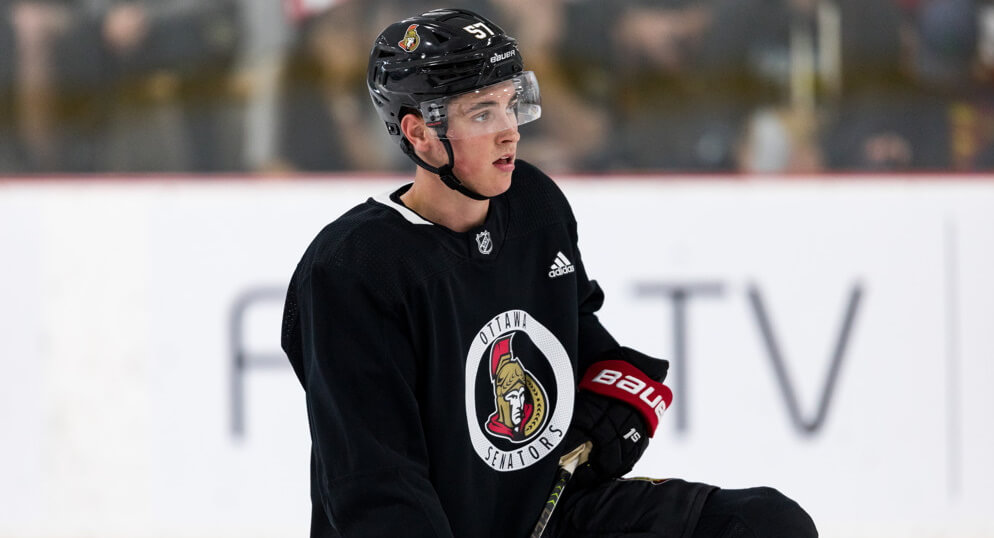 Every year it seems that NHL teams miss on a few players in the 1st round. It is a realistic expectation. At no fault to these organizations, players develop at their own pace. In lieu of this, fantasy teams have an incredible opportunity to rectify that by swinging for the fences in the 2nd round. It’s always smarter to pick the boom-bust than it is the safe choice. With the data available today, it’s a lot easier to understand who the BEST boom/bust potential players are for your dynasty squad. Using our own platform Fantalytica, we have gathered five forward prospects taken outside of the 1st round that have boom/bust written all over them. Fantalytica is a platform dedicated to helping fantasy dynasty owners research and anticipate the best prospects for their unique leagues. After sifting through the top players in the platform, I’ve landed on these 5 prospects who are worth the most consideration. 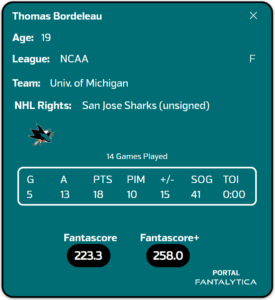 Taken in the 2020 NHL Draft, Bordeleau stands at a mere 5’9, but don’t let that fool you, what he lacks in size he makes up in cerebral processing. Bordeleau skates with uncanny confidence and stature. He has a unique way of mitigating error on the ice, whether it’s of his own doing, or his teammates.

A staple on Michigan, his IQ and skills are a significant reason why Michigan has found massive success this year. Don’t let the news headlines fool you, Bordeleau has impacted this team more than Owen Power and Kent Johnson, two perennial prospects headed for the 2021 NHL Draft.

If you’re in a bangers league (Hits + Blocks), you may consider acquiring him. For dynasty leagues who depend on points more, a guy like Borderleau could thrive for you in the coming years. He attempts 5.5 shots a game and always finds himself shooting from the top circles and in. A key reason why he’s mentioned in this article is because of where his future lies – San Jose. They seem to be a few years behind their California neighbors (LA & Anaheim) in their respective rebuilds, so Borderleau should have a relatively easy time finding his way to the NHL. I’d say its quite unlikely you’ll miss on him if you choose to snag him.

Why you want him:
Shoots a lot, operates under a weak organization for prospect depth, has a real chance to be an impact player.

Why you don’t want him:
Doesn’t provide many hits or blocks, you’re skeptical of his potential (for whatever reason that may be) 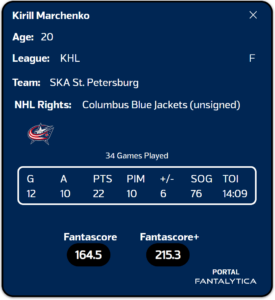 When Marchenko was drafted, many naysayers thought it was a completely wasted pick. His draft year was statistically unimpressive, and his physique implied he could have trouble keeping up with the speed of professional hockey in Russia.

Boy was that ever wrong. Marchenko has steadily superseded his draft position year over year over year. Despite being taken in 2018 (49th Overall), Marchenko has been a solid contributor on one of Russia’s best teams this year. Hes what you would call a typical power forward – strong on the puck, gets dirty in the corners to retrieve the puck, and usually finds the back of the net from up close.

But there’s an element to his game that falls outside of that category. Incredible puck handling. Marchenko rarely gets bumped off the puck and always finds a way to transport from the neutral zone to a shot on net. His transition game is addictive to watch, and soon he’ll be addictive to watch for CBJ fans.

Why you want him
He’s the complete package for a full scoring dynasty league (Hits Blocks etc…). He has found ways to succeed at every level.

Why you don’t want him
His game could potentially not translate well to American ice. 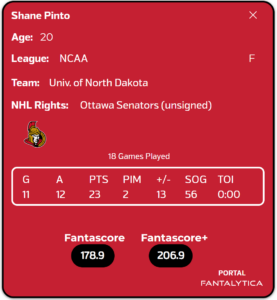 Boy was he a head scratcher of a pick in 2019. The Senators traded up to choose Pinto for the 32nd overall pick. His draft day evaluation by analysts suggested he could top out as a competent high energy 3rd liner. His current development seems to trend more towards a 2nd line winger with incredible straight-line speed and a knack for capitalizing on opportunity. Pinto currently plays for North Dakota in the NCAA.

His story is incredible, he started his journey playing for a 18U AAA team, and after a surprise season in 18-19 in the USHL, he became popular within the scouting community. Prior to this, he was generally unknown. He’s what they call a ‘fast learner”, and it’s quite evident this year. Not to denounce his success from last year, but Pinto has found a new gear after 18 games. He is without a doubt the engine for North Dakota, and could soon be a complementary winger for Ottawa (as early as next year).

He is tall and rather skinny, but his peripherals suggest his potential is sky-high for dynasty owners. I would not have recommended drafting Pinto in 2019 due to his eye-test being an eye-sore. His stats were indicative of an NHL future, but stats are only half the battle. He’s in the infancy phase of what could be a fantastic NHL career, nonetheless, and his eye-test has drastically improved since his draft.

Why you want him:
Like Marchenko, he’s a complete package for any dynasty owner. He finishes checks and could easily find himself stapled next to any of Stutzle, Tkachuk, or Norris for years to come.

Why you don’t want him:
Its reasonable to assume he could take a few years to get the hang of the NHL’s pace. I would expect at least 2 full years in the NHL before his kit starts shine. 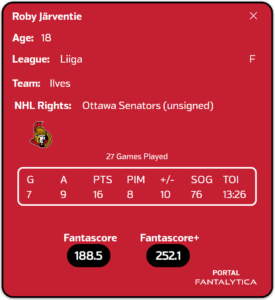 The Senators are on the board here again – this time with the Pinto of 2020! Jarventie was a surprise choice this year after he was projected to get drafted later in the 2nd. Senators felt it was a no brainer to take him as high as 33rd in 2020. The first thing anyone would have said about him last year was that he obliterated Finland’s 2nd tier league (Mestis). Regardless of the competition there, putting up 23 goals and 38 points in 36 games was surely impressive.

Jarventie came out of the gates with a will to prove the doubters wrong. Sitting at an impressive 16 points after 27 games is great. People are forgetting he is still an 18-year-old.

It’s not ironic to think his comparable is Shane Pinto 2.0. Same height, same type of game (basically), and was taken earlier than expected, by the same NHL team. The future is surely bright for Jarventie. He has a great shot, great hands, solid work ethic, and most importantly, has been performing against men as an 18-year-old. It’s already starting to look like some teams missed the opportunity to take him later in the 1st round. Don’t be them.

Why you want him:
Potential to be a 30/30 guy (30 goals 30 assists), part of an organization that prioritizes youth and development.

Why you don’t want him:
Has some trouble with the rigors of a men’s league, physically. If he is not put into situations to score, he has trouble carving out his own plays. 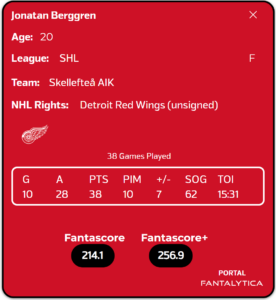 Lo and behold, the prospect who’s talked about most on #HockeyTwitter, Jonatan has FINALLY evolved from a caterpillar to a butterfly. It’s taken a few lasting injuries and opportunities to get there, but Detroit has got to be excited for this one. Jonatan was taken in the 2018 NHL Draft by Detroit at 33rd overall. To ex-hockey players, he stands out for an obscure skating posture. He hunches over a bit too much while skating, which can bother the viewer – but that is truly the only downside he has.

He has turned the SHL upside down this year after producing 38 points in 38 games thus far, good for 4th in SHL scoring. Jonatan has a fascinating skillset that absolutely translates to the modern NHL. After watching multiple clips of Berggren on the powerplay, it’s safe to assume he thinks the game like Mat Barzal. No, he won’t be a Barzal-esque player, but he shows glimpses when flying around the perimeter of the offensive zone a few times before finding a seam to launch the puck towards.

Berggren is quite methodical on the ice. He does the heavy lifting for his linemates more than not, which usually signifies creative thinking and dominance. Red Wing fans can surely expect a play driving 2nd line center/winger in Berggren, which means dynasty owners can relish in the idea of having Berggren play a role on their squad.

Because of the nature of Berggren’s game, one can expect his hitting and blocking to increase as his TOI increases. So far he hasn’t quite knocked the doors off with his peripherals, but as I said, he will get there. His performance this year tells me he has the potential to be a point-per-game player in the NHL – he’s found ways to dominate every league he’s played in.

Why you want him:
You should want him for your dynasty team.

Why you don’t want him:
His hunchback bugs you.

For more help on the fantasy ice, check out this week’s Fantasy Hockey Waiver Wire!