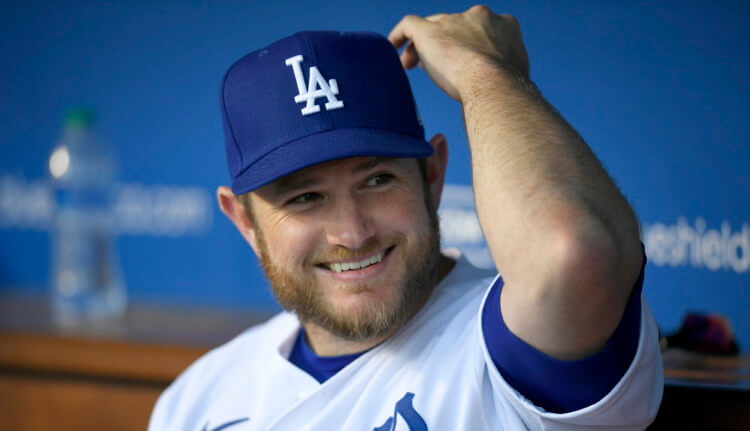 Over a long season, a player’s injuries can impact their output. It’s important to remember that there are factors that come into play before deciding if someone’s performance is injury-related. A player’s track record, for one, is something to look at, since having “done it all before” shows that they could probably “do it all again”. Injury reports and updates are essential as well because knowing how a player is dealing with their ailments can help decipher why they may have struggled in the first place. Finally, playing time is key in determining if they were getting the opportunities to produce, or if they were sitting out games to rest up and heal.

Below I break down three hitters from the National League who were injured in 2022 but are in line for bounce-back seasons in 2023.

Max Muncy played through an injury that significantly hurt his production this season. Late in 2021, he tore his UCL, and the impact of that injury was something that lingered into the 2022 season after a premature debut. Over the first 76 games of the season, Muncy hit just nine home runs and batted .156 over 309 plate appearances. Then, he and his coaches made adjustments to simplify his swing, realizing that he was over-compensating for what his body was doing in the healing process.

"It's good to do something to help the team win.. seeing a direct result tonight felt really good." @maxmuncy9 on his 2-run homer in the second. pic.twitter.com/ewgBETcGR0

The results were outstanding, as Muncy was producing at a rate somewhat similar to that of his previous seasons. Unfortunately for him, he later suffered knee irritation, which hindered any chance of him feeling at 100% all season. Thus, his overall numbers this year were injury-related setbacks.

Looking ahead to next season, his Steamer projected numbers look to have him back on track to his previous success. Alongside his ADP of 156 and his multi-eligible positioning at second base and third base, it’s at this price that he is worth a shot to see if he can replicate his most successful seasons’ numbers. This, alongside position scarcity, makes him an intriguing bounce-back candidate…

Ke’Bryan Hayes scuffled through the 2021 season with wrist injuries, leaving a bad taste in fantasy owners’ mouths after a 2020 breakout. Still, the opportunity to bounce back was there, but Hayes did anything but in 2022. He posted a low batting average with minimal power over most of the season. So why is he being listed here?

First off, he continues to hit the ball hard, which is always a plus. He also demonstrates good speed and an ability to know when to run, as he was 20 for 25 on stolen base attempts this year. That being said, after the season Hayes revealed that he has been battling back ailments all season long. It was those problems that led to his swing being affected in a negative way. And while he did what needed to be done to stay on the field (strengthening work before and after games to keep the injury from getting worse), he still couldn’t completely recover from it. This would lead one to believe that extended rest could have been the answer all along. 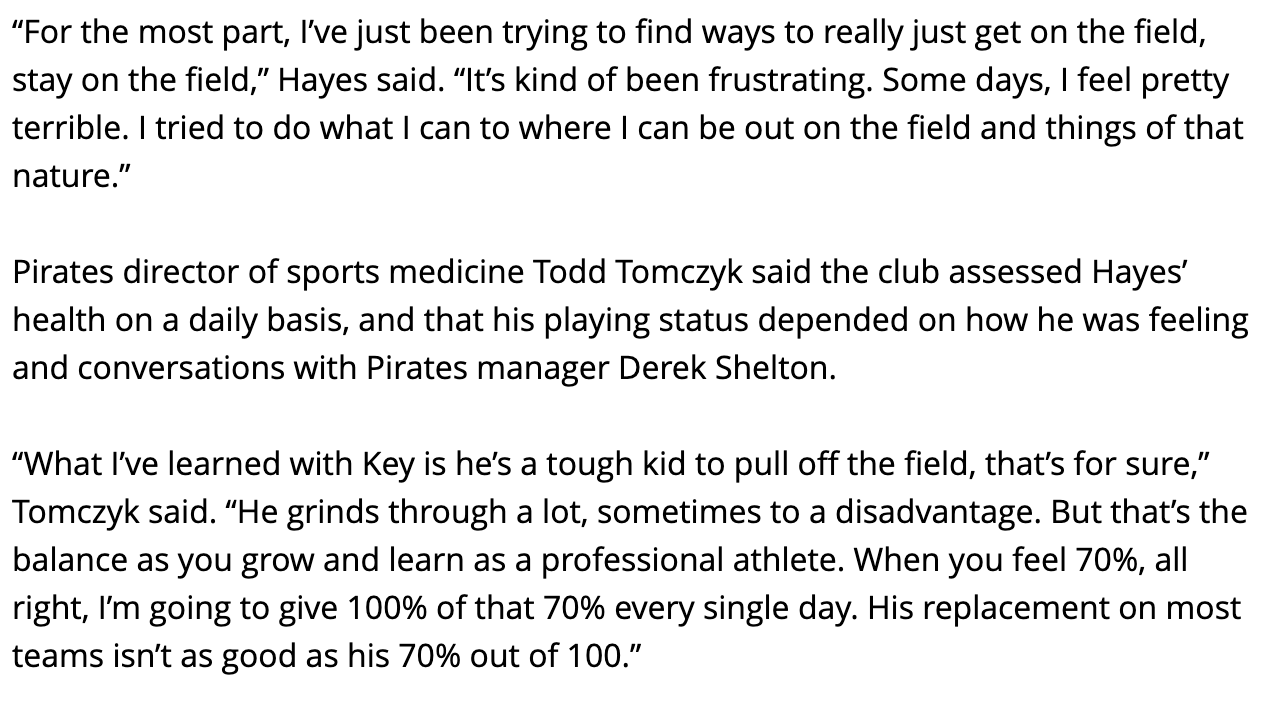 Despite this, he finished the year with near-elite bat-to-ball contact with regard to how hard it was hit. He was able to hit the ball hard while spreading the ball all over the field. Unfortunately for him, it was his exceptionally high 49.6% ground ball rate and low 17.7% flyball rate that caused a lot of those hits to be groundouts. There’s definitely some potential here. 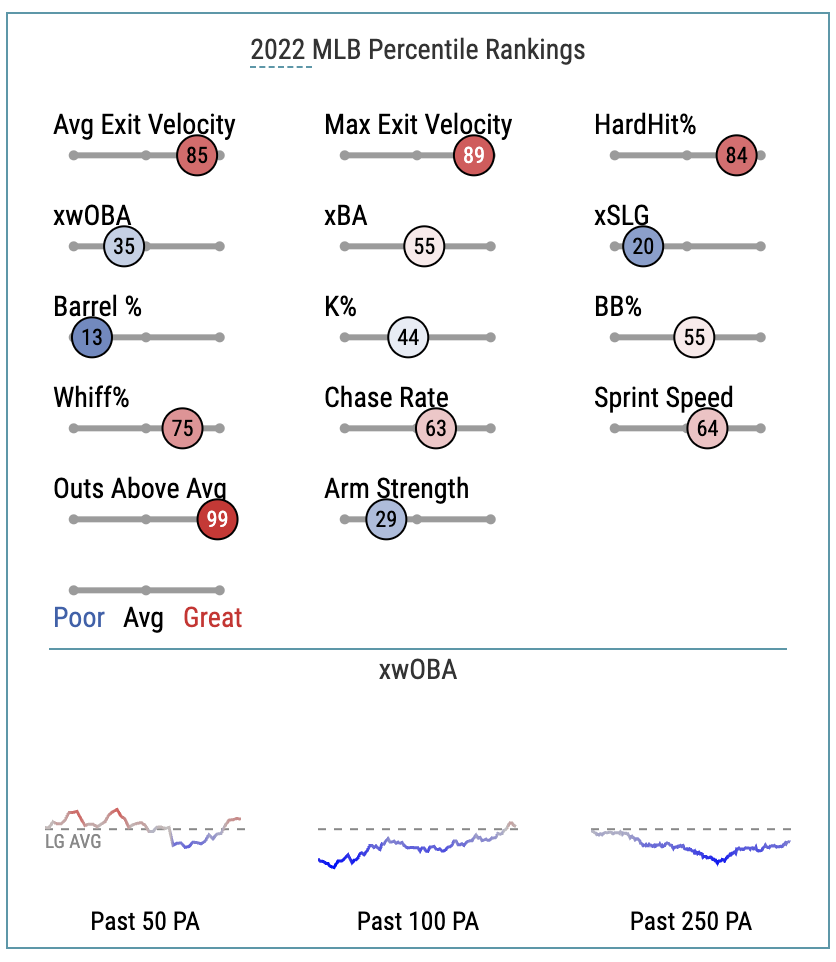 Heading into next year, there’s a real opportunity for success. In order for him to take the next step, he first, needs to get himself healthy over the offseason. Whether that be through surgery or a change in routine, it has to put him at 100 percent health come next April. Secondly, he needs to understand that he cannot play every day if he is not near full strength. Occasional rest is what’s good for the body to help manage a long schedule and be available for the long term. Finally, he will need to elevate the ball off of the ground. It’s possible that this year’s struggles were back-related, but whatever the case may be, that should be his off-season priority. In doing so, his very-friendly ADP of 153, alongside his Steamer-projected growth of 14 home runs and 17 steals, could become a reality.

The Colorado Rockies rarely make a big splash in the free agency market, but when they do, they go big. The expectations were huge for Bryant entering the 2022 season, due to the money spent and his home-field advantage. In true and unfortunate Rockies’ fashion, their plan failed miserably, as Bryant missed most of the season due to lingering injuries that just wouldn’t go away.

After struggling to return from back injuries that sidelined him, Bryant would return to the team and begin to be the player that they had envisioned when they signed him long-term. Over a 25-game stretch, he managed to hit five home runs, and bat .330 over 108 plate appearances. Everything seemed to be turning around and trending in the right direction.

Kris Bryant homered again yesterday, his fourth home run in his last five games. Since being reinstated from the injured list on June 27, has hit .341/.383/.682 with three doubles, four home runs, six RBI, three walks and three strikeouts in 11 games.https://t.co/6u3fimocJJ

Unfortunately for everyone involved, Bryant would miss the rest of the season with a bone bruise on his foot and plantar fasciitis. Compounded together, both injuries became impossible to manage. He himself said that the higher altitude made it more difficult for him to recover. This resulted in a walking boot and additional PRP injections. The most promising part of all of this was that he was resuming baseball activities near the end of the season.

Heading into next year, the cost of drafting Bryant comes with some potential for a bargain. With an ADP that low, he comes with a track record of producing far beyond the numbers that are projected for him. Thinking more about it, the aforementioned 25-game stretch is what should be remembered when drafting.