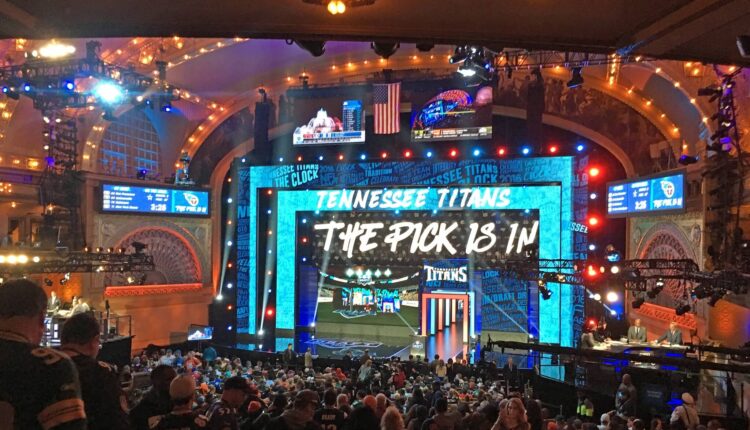 Everybody with the bird app has noticed that the Twittersphere is abuzz with countless pro-day videos. That can only mean one thing. The NFL Draft is right around the corner. The first round selections will soon be taking the long walk (or griddy) across the stage, sporting their finest suit and shoes. They’ll shake hands with the Commish and just like that, their professional football careers will begin. From blockbuster trades, releases, and signings, this off-season has been one that we won’t soon forget. We’ll highlight some of these notable transactions AFC South teams have made thus far, and reflect on how they can further address their top needs in this year’s NFL Draft.

The Texans have finally washed their hands of Deshaun Watson and can look toward the future. I could have been extremely rude here with the team needs and just said “everything”. While I technically wouldn’t have been wrong, it must be noted that this team does have some pieces to build around. QB has been left off this list as the Texans are reportedly okay with Davis Mills as their signal-caller. Why shouldn’t they be? Mills quietly threw for 2,664 yards and 16 scores in only 13 games played. Of course, 1,037 of those yards were racked up by top WR, Brandin Cooks, who is in desperate need of a running mate. Seriously, I’ll Venmo a whole dollar to anybody who can name another receiver on the roster. Unfortunately for the Texans, the defense was so putrid last season, that they’ll have to wait to draft a WR.

As it stands today, the Texans are the proud owners of two first-round draft picks. You can bet your bottom dollar that one of those selections will be a difference-maker on defense. It would not be a shock to see two defenders selected with the 3rd and 13th pick. There was only one team that allowed more yards per game than the Texans last season and that was the New York Jets. Anytime you’re being mentioned in the same breath as the Jets defense, you know that you need to make a change.

With the 3third overall pick, this team could benefit from an elite pass rusher. Oregon’s Kayvon Thibodeaux fits the bill exactly; 49 tackles, 7 sacks, and 2 forced fumbles this past season paired with his freakish athleticism is enough to make Texan fans salivate at the prospect. Putting pressure on a quarterback disrupts timing and accuracy. Houston should take advantage of this and draft an absolute ballhawk at pick 13. LSU’s CB Derek Stingley had an impressive first year in Baton Rouge totaling 6 picks. But we would see his stats drop off significantly in subsequent seasons as teams became reluctant to throw his way. This, coupled with some minor injury concerns, may be enough for the Texans to land the top steal of the 2022 NFL Draft.

Indianapolis scouts are going to earn their paychecks this year as the team is currently without a first-round draft pick. Luckily, this team has the roster to win the South and make a deep playoff run. RB, Jonathan Taylor carried this offense to the tune of 1,811 rushing yards and 18 TDs. It is a dangerous thing to be one-dimensional in this league, which is likely why the team chose to upgrade their QB position.

Over his career, Matt Ryan has shown that he can support two top 24 WRs. It is crucial for the Colts to provide Ryan with another reliable pass catcher. Ryan and TY Hilton may form some sort of weird veteran bond, but it is unlikely that Hilton suddenly becomes a difference-maker once again. The offseason is still young and they may elect to sign a veteran free agent with a proven body of work. But if they choose to fill this need in the draft, they’ll have to wait until the 10th pick of the second round to do so.

One wide receiver that could be available to draft at 42 overall is Penn State’s, Jahan Dotson. Reliability is the name of the game for Dotson. He did not drop a single pass over 20+ yards (54 targets) in his four years at State. In 2021, Jahan amassed a ridiculous 91 receptions, which he manufactured into 1,182 yards. His 12 TDs last season also proves that he has a nose for the end zone. This crisp route runner and separator would be a dream to line up across from Michael Pittman.

A quick show of hands, who thinks that the Jags will be taking Aidan Hutchinson with the number one overall pick of the 2022 NFL Draft? Yeah, I thought so. This team needs an identity on defense. The addition of Hutchinson, who will undoubtedly be the favorite to win DROY, will give the Jaguars just that.

It was a struggle for the Jacksonville Jaguars to protect their rookie QB last season. In 2021, Trevor Lawrence was the 12th-most blitzed quarterback with the 7th most hurries. 32 times the pressure was too much and the defense came away with a sack. We won’t see Trevor’s true potential in the league until this team puts the right bodies in front of him. There might not be a bigger body in the draft than 6’8″, 384 lbs. OT, Daniel Faalele. Yes, you read that correctly, we are talking about one mammoth of a man here! In the final 8 games of his career, he allowed only 1 pressure. He only began playing football five short years ago, which speaks volumes to the potential upside he possesses. This makes him a top candidate to be selected at pick #33.

The Jags’ defense was scraping the bottom of the barrel in search of LB production. Which is why the signing of new LB Foyesade Oluokun was a great start to filling that need. According to Next Gen Stats, Oluokun has made a tackle on 16.6% of his defensive snaps. This ranks highest in the NFL amongst all linebackers. Who better to pair him with in the draft than Wisconsin LB, Leo Chenal. The Badger was a complete force in 2021, recording 55 solo tackles and 8 sacks. Chenal is a densely muscled inside defender who wakes up every morning craving contact. His all gas, no brakes approach to the game would make the Jaguars LB corps begin to look formidable once again.

As the #1 seed in the AFC, it must have been tough for Titan fans to watch Bengals kicker, Evan McPherson boot his team into the AFC Championship game. Thankfully, the Titans have already addressed their main areas of concern this offseason. It appears that the team now has a legitimate receiving threat at TE, sorry Firsker truthers. Austin Hooper can still ball. Do yourself a favor and erase Hooper’s Cleveland Browns tenure from your memory. The TE should absolutely thrive in Tennessee. Things never got going for WR, Julio Jones, who, stop me if you’ve heard this before, missed seven regular-season games. The search for a new WR2 didn’t last long, as the Titans convinced Robert Woods to put ink to paper. But do not be surprised if they don’t stop there and select another wideout in the draft.

It must be noted that the Titans only have two picks in the top three rounds of the draft. That means that there is a decent probability that if they’re not in love with a player at pick #26, they’ll trade it away for additional picks. It’s no secret what Tennessee wants to do on offense. All aboard the Derrick Henry express! This is a team that lives and dies via the run game. The retention of center Ben Jones was a key offseason transaction for the squad. However, the loss of Rodger Saffold will be felt at the guard position. If the Titans do address this need in the first round, Boston College’s Zion Johnson could be that selection. Johnson is an extremely versatile offensive lineman who can play guard and tackle. He’s a smooth athlete, who shines especially bright as a combo blocker.

The Tennessee Titans could also address a serious need on defense, the secondary. The Titans were the stingiest team in the league with a paltry 83.5 rushing yards allowed per game. Opponents had much better success through the air. The Titans were ranked 25th out of 32 in passing yards allowed per game. As it stands now, UTSA CB, Tariq Woolen is certainly fair game at pick #90. At 6’3, Woolen ran a blazing 4.26 official 40-yard dash in the NFL Combine. That combination of height and speed makes for a very enticing prospect.