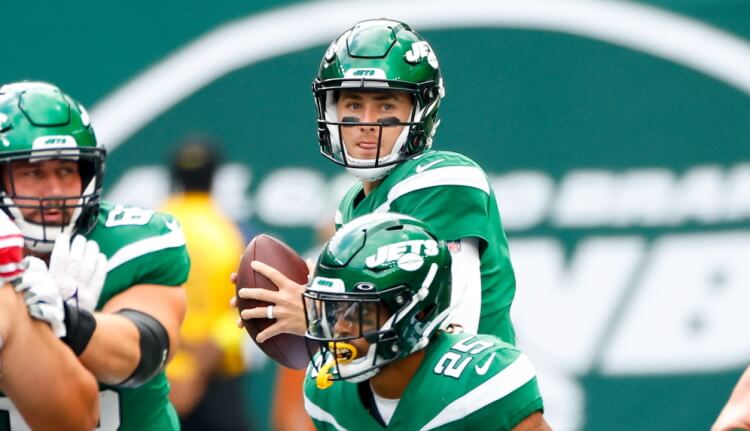 For Week 11, I recommended Marcus Mariota against the Bears, Jimmy Garoppolo against the Cardinals, and Davis Mills against the Commanders. Mariota had a useable QB14 fantasy finish helped by a rushing score, and Garoppolo exceeded all expectations with four passing touchdowns en route to a top-5 fantasy finish. Unfortunately, Mills continued to play poorly despite a fair matchup and threw two interceptions with no passing touchdowns, barely salvaging an otherwise miserable performance with a late garbage-time rushing score.

Overall, Week 11 was a success for fantasy GMs who eschewed drafting a quarterback early and have been streaming the position. If you drafted Patrick Mahomes or Lamar Jackson early or managed to snag Tua Tagovailoa or Geno Smith later on in your drafts, this article probably isn’t for you. But if you’ve been streaming quarterbacks this season, here are some viable Week 12 quarterback streamers with good matchups to target.

Note: The below quarterback streamers are the “best of the rest”, meaning that they’re generally rostered in less than about 50-60 percent of major fantasy football platforms at the time of this writing even after waivers have run on Wednesday.

Despite subpar passing production, Marcus Mariota has scored double digit fantasy points in all but two games this season, and a large part of that has been due to his average of 34 rushing yards per game. Through 11 weeks, Mariota ranks fifth among quarterbacks in rushing attempts, sixth in rushing yards, and fourth in rushing touchdowns.

The Commanders’ defense has struggled to stop mobile quarterbacks as well, having allowed a rushing touchdown to opposing quarterbacks in each of their last two games. The loss of Kyle Pitts to a torn MCL downgrades the Falcons’ passing offense as a whole and limits Mariota’s passing ceiling, but his rushing production gives him a strong floor and solid upside, keeping him among the top quarterback streamers for Week 12.

Since Matt Ryan was reinstated as the starter, the Colts’ offense has improved. Ryan scored 23 fantasy points against the Raiders in Week 10 en route to a top-5 fantasy finish, and though he struggled against a stout Eagles defense last week, he still managed over 200 passing yards and no turnovers in the near upset. This week, he’ll face a Pittsburgh defense that has allowed the most passing yards per game in the league to opposing quarterbacks and the seventh-most points per game to opponents through 11 weeks.

The Colts’ offensive line is a major concern, ranking second-worst in the NFL in pass block win rate, especially with TJ Watt back in the lineup for the Steelers. Still, without many strong quarterback streamers to choose from this week, Ryan remains among the top options. He has a dangerously low floor, but Ryan has a fair fantasy ceiling as well playing at home on Monday night.

It’s a tough week for quarterback matchups, so Mike White makes the list of quarterback streamers even in his first start of the season. The Bears rank just 25th in DVOA against the run, so there is concern that the Jets could continue with a run-heavy game plan. However, if they trust White to pass the ball, Chicago’s defense also ranks third-worst in the league at stopping the pass and has allowed the sixth-most points per game to oppenents thus far on the year.

White is a relative unknown, but the former fifth-round draft pick did at least show some flashes in his three starts last season with the Jets. Although he struggled against the Colts and Bills last year, White also managed to pass for over 400 yards and three touchdowns against the Bengals in his first career start last season. While a risk-reward play, White could bust but has also shown that he has top-5 fantasy upside in a good matchup, which he has this week.

In deeper leagues, if none of the above-recommended quarterback streamers are available, Jimmy Garoppolo is still available in some leagues even after his big four-touchdown game in Mexico City. He’d be among the top-3 quarterback streamers above were it not for his roster percentage. And if you’re desperate, Taylor Heinicke hasn’t thrown a touchdown over the last two weeks, but he still has upside facing an Atlanta defense that ranks 28th against the pass and has allowed the fourth-most passing yards per game to opposing quarterbacks and the fifth-most points per game to opponents this season.

Fantrax was one of the fastest-growing fantasy sites over the last few years, and we’re not stopping now. We are the most customizable, easy-to-use, and feature-rich platform in the industry, offering the greatest fantasy experience for your dynasty, keeper, redraft, and best ball leagues. Fantasy sports doesn’t sleep, and neither does Fantrax, with seasons running 365 days a year. Take your fantasy leagues to the next level now at Fantrax.com!
2022 Quarterback Streamers
Share