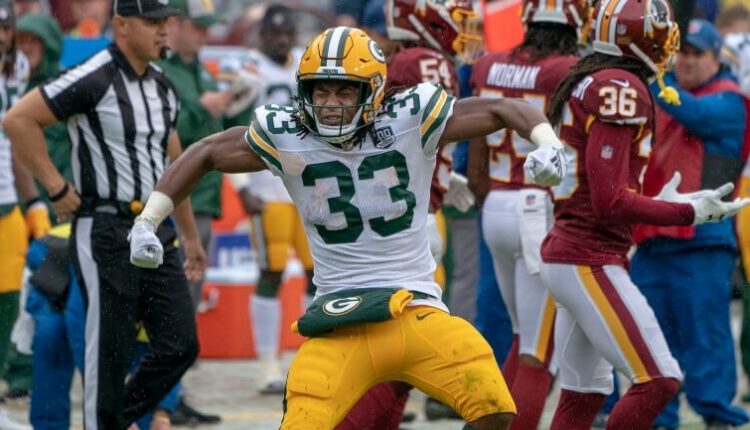 Looking at the basic counting stats, AJ Dillon and Aaron Jones appear to have had a similar workload in 2021:

After adjusting for red-zone and passing-game usage, Jones ended up with 14.6 wOpp per game and Dillon 10.4. Here’s why:

The point here is, according to current ADP, Jones (3rd round) is available at a discount, and managers have to pay a premium for AJ Dillon (5th round). 14.6 wOpp per game is the floor for Jones in this new look Packers offense, as the expectation is for them to run the ball more often in 2022. A key component to success on fantasy draft day is securing value, and if Aaron Jones remains at his 3rd round ADP, he could be a league-winner.

Aaron Jones will finish as a top-10 fantasy running back in 2022, on a per-game basis.

Make no mistake about it, the Packers will not roll into 2022 without adding an impact player in the passing game. They recently signed Sammy Watkins, who has evolved into a great underneath, catch-and-run player, though has struggled with injuries. The Packers have two first-round picks and are a great bet to use at least one of them on a receiver if a top player falls to them.

Allen Lazard has the most upside of any player in this pass-catching group, given his relative youth and chemistry with Aaron Rodgers. He got 7.0 wOpp per game last year with Davante Adams in town, so that is his floor in 2022. After that, the remainder of the 40% target share left behind by Davante Adams and MVS should be split fairly equally between the Packers receivers, and an increase in targets for both running backs. Here are the target splits from the one game Davante Adams missed in 2021:

The dispersion is pretty random, though the 11 targets for Aaron Jones stands out. The takeaway from the departures of Davante Adams and Marquez Valdez-Scantling is two-fold:

Darnell Mooney had a 27% target share in Chicago last season and was the clear top target for QB Justin Fields. Most of his work was done outside of the red zone, though the Bears didn’t spend much time in that area of the field in 2021. Mooney should see some additional red-zone targets in 2022 assuming an increase in offensive efficiency, and 8.2 targets per game is a good median projection for him, prior to the NFL Draft.

The second receiver in this offense averaged a 13% target share in 2021, and newcomers Byron Pringle and Equanimeous St. Brown should battle for that spot in training camp. Unless we get some insight into the new Bears offensive game plan during the preseason, these players are best suited as in-season waiver-wire pickups. Chicago is a candidate to select a WR in the upcoming NFL Draft.

David Montgomery was the focal point of the 2021 Bears offense, averaging 17.3 wOpp per game across 13 contests. He has one of the most secure workloads in the NFL but has struggled with injuries. This offense is likely to feature the RPO, which generally boosts value per carry for running backs, especially in the red zone. Montgomery belongs in the third-RB tier, but injury concern must be a consideration before drafting him in 2022.

Chicago Bears HC Matt Eberflus told @CollinsworthPFF that Justin Fields is very comfortable in the new offense. "This is his football team."

Matt said they will "certainly look at the draft for offensive line." Believes they can draft starters with their 3 picks inside 71.

The Bears tight end room has plenty of skill, but not much opportunity. Bears TEs combined for 7.6 targets per game in 2021, most of which were handled by rookie Cole Kmet (5.5 per game). Jimmy Graham and Jesse James are both gone, but the team signed Ryan Griffin and James O’Shaughnessy to replace them. This TE room is crowded, so Cole Kmet is best suited as a dynasty-stash, based on his athletic profile.

Justin Fields has the best chance of all the QBs drafted in 2021 for a breakout campaign in 2022. He ran the ball six times per game in 2021, a number that should rise in 2022. Managers can assume new OC Luke Getsy will incorporate the RPO into Chicago’s game plan as they did in Green Bay, where he coached last season. Fields has a ways to go as a passer in the NFL, but running quarterbacks don’t need to throw for 300 yards a game to have fantasy value. Fields should finish as a top-16 QB in 2022 with the increased rushing volume and could provide nice value in 2QB and Superflex drafts.

Check back tomorrow for a look at the NFC South, starting with the Tampa Buccaneers and the New Orleans Saints.