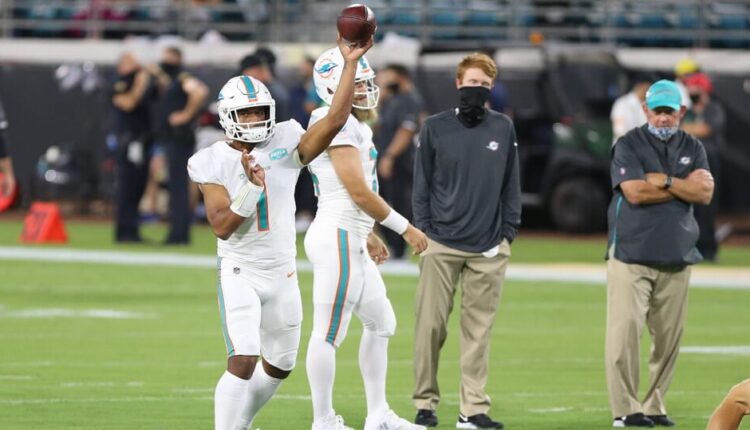 Tyreek Hill brings a new dimension to this Dolphins offense with his speed. He and Jalen Waddle are both great route runners with speed and should headline this Miami passing offense in 2022. The Dolphins hired Mike McDaniel away from the 49ers to be their new head coach, and he says he is bringing many of the Niners’ offensive concepts to Miami. McDaniels wants Hill to play the “Deebo” role in this offense, which could be fantasy gold for Tyreek. Tyreek will see a slight reduction in wOpp per game, as this role produced 14.6 wOpp per game in 2021, down from Tyreek’s 15.9 in Kansas City. Using this preliminary range of opportunities, Tyreek projects as a mid-range WR1.

Jaylen Waddle averaged 14.4 wOpp per game in 2021, which is likely not sustainable for 2022, though the chemistry he has built with Tua Tagovialoa will carry over. The next closest receiver for San Francisco in 2021 averaged 8.2 wOpp. This creates a wider range of outcomes for Waddle, but if the upside is last year’s role, managers can justify the current price of a 4th round pick.

The Miami backfield looks muddy at first glance, but following the money shows that Chase Edmonds will get the first crack at lead-back duties. The Dolphins gave him a six-million-dollar deal, while Myles Gaskin and Raheem Mostert are both on $2+ million contracts. This role produced 13.3 wOpp per game in 2021, and most of the production came outside of the red zone. Edmonds possesses pass-catching upside, but still only profiles as a mid-range RB2 in this role. Mostert is the handcuff, assuming full health.

Mike Gesicki seems like the odd man out in this offense, on paper, but don’t forget that George Kittle was the 49ers’ top receiving threat in 2021. Kittle regressed somewhat in 2021, but some of that was due to injury. Gesicki inherits a role with a presumed 11 available wOpp and a 19% target share. Gesicki has shown an ability to make athletic plays in his young career. I expect Mike McDaniels to make an effort to get him the ball, especially in the red zone, where Kittle was most effective throughout his career.

UPDATE: The Jets selected Ohio State WR Garrett Wilson and Iowa State RB Breece Hall in the first two rounds of the NFL Draft. Wilson should see 8-11 wOpp per game, given the role he is taking over, and I expect Hall to take the 60% role mentioned below in this backfield, and Carter will be the handcuff.

Michael Carter struggled with injuries in his first season but still handled a decent-sized workload. He averaged 12.6 wOpp per game in 2021, a number that could have been higher, had the Jets been more competitive. The Jets’ 60-40 snap split from last season should remain the same. Carter has the most talent of anyone in this backfield, so if there is any inkling that Carter will see a larger workload, he will provide value on draft day. He is currently a mid-range RB2. Ty Johnson is the handcuff.

The Jets had a clear agenda to upgrade the tight end position this offseason. They replaced both their pass-catching and blocking tight ends with players who can do both. Tyler Conklin was a red-zone specialist in 2021 for the Vikings, and CJ Uzomah grew in his role as the season progressed in Cincinnati. Neither player is draftable currently, as the Jets offense has not proven to be efficient yet, and we need upside from the lower tier of tight ends.

Elijah Moore led all Jets wide receivers with 11.7 wOpp in 2021, closely followed by Corey Davis (10.5) and Jamison Crowder (9.9). Crowder’s departure opens up a solid role in an offense that is trending upwards. Crowder lined up in the slot 85% of the time in 2021, which Elijah Moore will do in 2022, leaving one outside WR spot open for a solid workload. All Jets WRs will be under drafted this season especially Corey Davis as an intermediate target with natural red-zone ability.