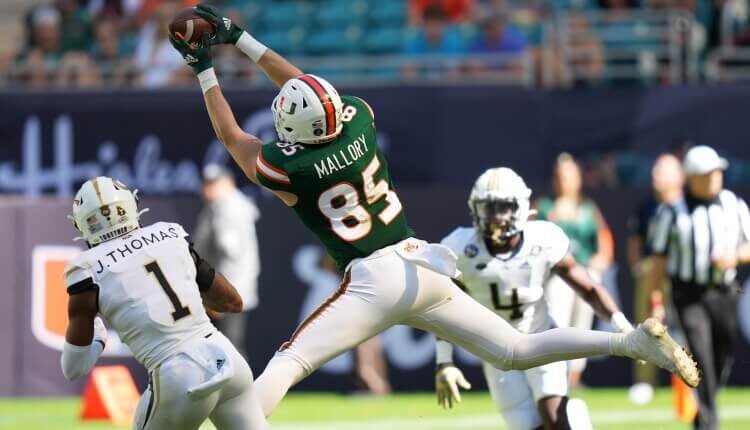 What is a sleeper? To me, a sleeper is someone who is forecasted lower in the position rankings but can provide tremendous value relative to ADP. It is time to uncover some sleepers for you to keep an eye on come draft day. Uncovering these hidden gems might be the difference in making the playoffs in your league. Each position has a handful of candidates that can be game changers for your team amid breakout seasons. In this series, I will be taking an in-depth look at two potential sleepers per position.

His numbers may be underwhelming to some, which is why he tops my TE sleeper list. Sam LaPorta was the leading receiver for Iowa last season and was targeted 24% of the time. Iowa’s QB room was absolutely disgusting as both Spencer Petras and Alex Padilla severely underperformed, leading to reduced production across the board for the Hawkeye’s receivers. LaPorta defines consistency as he recorded at least 60 yards in six of Iowa’s 13 games. However, Laporta did struggle to impact the box score against Iowa’s two toughest regular season games, combining for two receptions and 29 yards vs No. 4 Penn St. and No. 9 Iowa St. This can be pinned on the poor QB play however, those games significantly impacted his fantasy output.

Yes, the Hawkeyes still showcase the same QB room; however, there is a buzz on the improvements of Petras and the presence of redshirt freshman Joey Labas, which can lead to an uptick in production for Petras. Another appeal to draft LaPorta is Iowa lost two wide receivers as they transferred to Purdue. Their receiver room is rather unproven, making Laporta the clear No. 1 option in the receiving game. When working in the red zone, LaPorta had a big presence, and I expect that to repeat itself this season leading to more TDs for this sleeper.

There is no reason to reach for LaPorta in your draft, however, it is important to keep an eye on him whenever you feel there may be a run on TE’s. Though I think Laporta is the best TE in the nation this year and will be the tight end No. 1 drafted next year, I think his numbers will be slightly less than Brock Bowers (UGA) and Jaheim Bell (South Carolina). If Iowa can get a little consistency from the signal callers, expect big things from this sleeper.

Mallory finished fifth on the team in yards and third in touchdowns. He broke out in Miami’s key upset over No. 17 Pitt, posting 66 yards and a score. He followed that up with a solid performance against Florida State with 72 yards and a touchdown. Following Van Dyke’s transition into the QB No. 1 role, Mallory began to see more production and became a downfield option for Van Dyke.

There are two reasons to expect big things from this sleeper: the Hurricanes welcome in two solid offensive minds, coach Mario Cristobal and offensive coordinator Josh Gattis, and they are losing their top two receivers from last season. Miami does bring in Clemson wide receiver transfer Frank Ladson Jr., but I still expect Mallory and receiver Xavier Restrepo to be the big two for Miami. Gattis also values his tight end role in the receiving game: In 2021 Michigan’s second-leading receiver was tight end Erick All (15% of targets). Mallory will be the second-leading receiver this season and will be a huge red zone presence for this much improved Hurricanes’ offense. Expect this sleeper to reach the 600 yards and six-touchdown mark.

If you read my QB sleepers, you will have seen Miami QB Tyler Van Dyke on the list. If you plan on targeting him, Will Mallory adds a significant amount of value for your team. I believe this will be a very successful stack for your team and the best part is, if this duo is your plan, you can focus heavily on running backs and wide receivers through the first 7-8 rounds. You can wait on Mallory till the later rounds, and he may be a top-six fantasy producer.

LaPorta is the clear TE1 and “WR1” for the Hawkeyes and you can expect consistent production week in and week out, while Mallory comes with great value in the later rounds and can end up being one of the best fantasy TE in the nation. A few others who could be considered sleepers are, Payne Durham (10), Ryan Jones (13), and Marshon Ford (4).