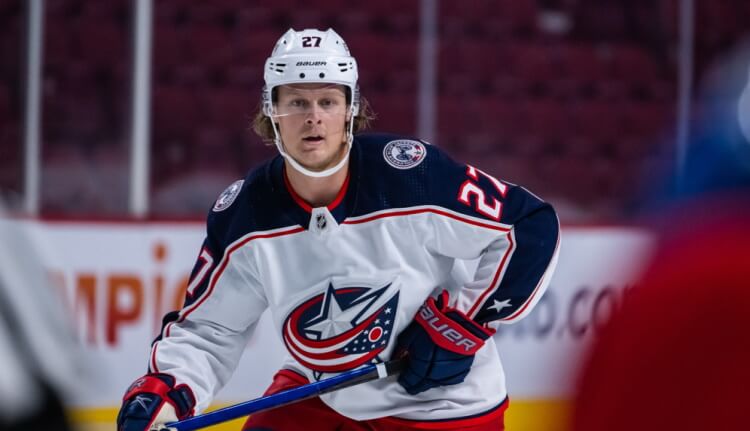 Earlier this month Fantrax published our preliminary top 50 defensemen rankings, but some talented defensemen who can contribute to your fantasy team were left off the list. Here are some sleeper defensemen who can help you in a variety of different ways in fantasy hockey that you should be able to get late in drafts or off of the waiver wire during the pre-season.

Forsling had a stellar offensive season for the Presidents Trophy winning Panthers in 2021-22, putting up 37 points in 71 games.

With the departure of MacKenzie Weegar, the 26-year-old Forsling is poised to take over his role on the first pair, his offensive upside and the high-flying pace the Panthers tend to play at make him worthy of a roster spot.

Last season Boqvist got the leeway to play the offensive, roving style that suits him under new coach Brad Larsen and it yielded promising results.

With a Blue Jackets team that has improved their forward group on paper, Boqvist’s skills have the chance to make him relevant in any fantasy league.

The 22-year-old appears to be locked in as the backbone of the Bluejackets’ second power play unit, and is in line to take over duties on unit one should anything happen to Zach Werenski.

The 20-year-old Drysdale is a must-have in any dynasty league, and would have been a shoo-in for our top 50 list had Anaheim not signed John Klingberg.

Drysdale was the sixth overall pick in the 2020 entry draft and has already played 105 NHL games, racking up a promising 40 points.

His smooth skating and offensive awareness give him a high upside, especially if Klingberg is injured or gets flipped at the trade deadline.

The right side of one of the best defensive pairs in hockey, Pulock plays a ton of minutes and consistently will contribute enough in all aspects of the game to be fantasy relevant.

While it appears Noah Dobson has cemented himself as the main defense option on the New York powerplay Pulock and his booming slapshot should still get opportunities on the second pair.

Usually a solid contributor in the hits and block categories, Severson had a career-best 46 points in 80 games last season, taking advantage of the 20 games that Dougie Hamilton missed.

Depending on the same kind of production will likely lead to disappointment, but Severson has a high floor and becomes a must-roster player if Hamilton gets injured.

Despite the emergence of Moritz Seider on the Detroit blueline last season Hronek put up a career-best 38 points in 78 games, including seven on the powerplay.

The Red Wings are a better team on paper and Hronek should now have a reliable partner in either Ben Chiarot or Simon Edvinsson, he’s worth a flier if you’re looking for offense.

Ekholm has long been an underrated fantasy player, consistently providing enough in the peripheral categories to warrant being rostered.

The 32-year-old averaged over 23 minutes per game last season for the fifth time in the last six seasons and is worth keeping an eye on if you need defensive depth.

Durzi showed his offensive prowess last year when Drew Doughty went down with an injury, notching 27 points in 64 games, 15 of those coming on the powerplay. His role will likely be diminished with Doughty healthy but his skill ceiling is high. Durzi is worth rostering in deeper leagues if you are in need of points from the back end.

With Charlie McAvoy and Matt Grzelcyk injured to start the season, Lindholm will be heavily leaned on both five-on-five and on the powerplay. He is worth rostering until McAvoy returns.