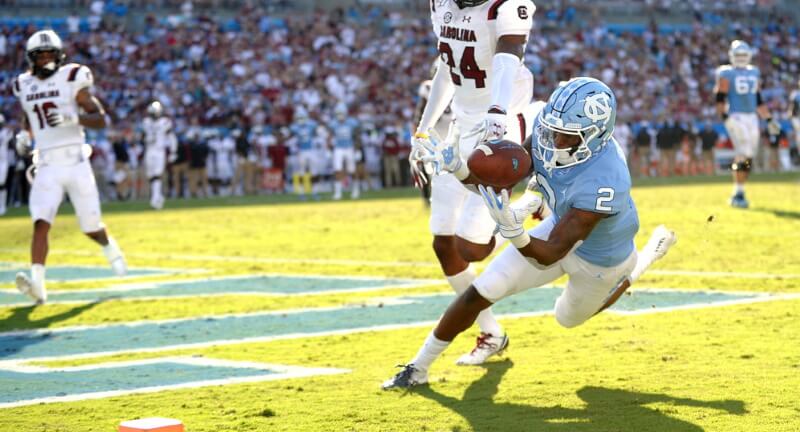 With no NFL Combine this offseason, the 2021 NFL Draft is sure to be full of surprises, perhaps even more so than usual. While landing spot will of course impact these superflex rookie rankings, talent generally overcomes situation in the long term, so pre-draft rankings still hold purpose. Here are my second-round rookies pre-NFL Draft in a superflex and PPR format (you can find Round 1 here).

Overshadowed by Ja’Marr Chase and Justin Jefferson for much of his tenure at LSU, Terrace Marshall finally got a chance to shine in 2020, leading the team in receptions and touchdown catches. With good size and speed, Marshall excelled in his big slot role, winning at the catch point and creating yards after the catch. He profiles as a strong no. 2 receiver for an NFL team and can be solid depth at the wide receiver position for fantasy rosters.

Dyami Brown is a speedy wide receiver capable of making big plays for chunk yardage at the next level. He has a smooth release and great acceleration, though he can be prone to drops at times and runs a limited route tree. Expect an inconsistent rookie season for Brown, much like the one we saw from Will Fuller in his first year in the NFL. Brown will likely haul in long touchdown passes that are worthy of highlight reels some weeks but have quiet games in other weeks, possibly making him better-suited for best ball formats.

Javonte Williams is a powerful runner with good vision, capable in pass protection, and a reliable receiver who creates yards after contact. The concern is that Williams runs aggressively and invites contact, which opens him up to injury risk at the pro level given his lack of bulk. He can play on all three downs, but NFL coaches may not want to expose him to that kind of workload. Often mocked in the first round of superflex rookie rankings, Williams has fantasy RB2 upside as the lead back in a committee but may be overvalued.

In terms of explosive plays, Chuba Hubbard ranks highly among the 2021 rookie class. Hubbard is a patient one-cut runner with breakaway speed but questionable pass protection, not unlike Travis Etienne. Unfortunately, unlike Etienne, Hubbard hasn’t shown much development as a receiver out of the backfield, which limits his floor and ceiling in PPR formats. Still, Hubbard can be a playmaker on first and second downs for an NFL backfield and have weekly upside for fantasy GMs.

There’s a wide gap between Kyle Pitts and the rest of this tight end class in terms of receiving and fantasy potential, but Pat Freiermuth may actually be the best all-around tight end. Cast as an able blocker, Freiermuth is also a competent route-runner, has good hands, and is incredibly tough to bring down after the catch. If whichever team drafts Freiermuth expands his role to include more work as a pass-catcher, he can be a red-zone weapon and sneak into that back-end fantasy TE1 range given his touchdown potential.

Elijah Moore can be a reliable slot receiver at the next level and has the speed to create yards after the catch. Moore leads this tier of three receivers as the most developed route-runner as well as the receiver who made the most downfield plays in college. None of them will be No. 1 wide receivers for their future teams, but Moore can be an immediate contributor and has the most potential to move up rookie draft boards if he goes to a pass-heavy offense lacking a No. 2 receiver.

Many consider Rondale Moore worthy of a first-round pick in superflex rookie rankings, but that seems far too rich considering his profile. He’s a versatile receiver who can generate explosive plays with his speed and ability to create yards after the catch. However, much of his freshman production came from manufactured plays on screens and sweeps, and the fact that he played just seven games over his final two college seasons due to various lower-body injuries creates major questions about durability.

The late breakout age is a looming concern for Kadarius Toney, but it’s at least somewhat mitigated by the fact that Toney was converting from the quarterback position and saw few snaps until his senior year at Florida. Toney is still a fairly raw prospect, but the former quarterback could develop into an explosive slot option in the right offense, as he flashed some ability to make plays downfield in his final season despite relying heavily on manufactured touches to reach his overall production totals.

Trey Sermon has good vision and is a tough runner who consistently breaks tackles to gain extra yards at the end of the play. However, Sermon lacks the speed to make a lot of big plays, and it’s unclear how much he can offer in the passing game given his low usage as a receiver at both Oklahoma and Ohio State. His ceiling is likely capped as an early-down back in a committee somewhere, and he’ll need to see a lot of red-zone touches on an efficient scoring offense to return steady fantasy production.

Last year, Hunter Long led all college tight ends in targets as a prominent piece in Boston College’s passing offense. He’s a capable route-runner, has reliable hands, and adds enough as a blocker to eventually develop into a three-down starter. The only area in which Long is lacking is athleticism, but while he may not stretch the field very often, Long can become a go-to red-zone threat as well as a dependable check-down option who consistently moves the chains.

Brevin Jordan is like Kyle Pitts in that he’s essentially a wide receiver playing the tight end position, though Jordan is nowhere near as athletic as Pitts or as nuanced as a route-runner. However, even without the size of a true tight end, Jordan has the strength to create yards after contact and enough speed and elusiveness to generate some yards after the catch. He can be a viable fantasy option if he goes to a team that incorporates the tight end into their passing game.

Kenneth Gainwell is a strong runner with good vision, elusiveness in space, and enough burst and acceleration to make some big plays. Gainwell was utilized as a runner and receiver in Memphis’s spread offense but may need time to adjust to the pro level. And though he has a well-rounded skill set, Gainwell’s lean frame and lack of size could preclude him from a heavy workload. He may be better suited for a change of pace role or as a passing-down specialist, but he has enough upside to round out the second round of these superflex rookie rankings.