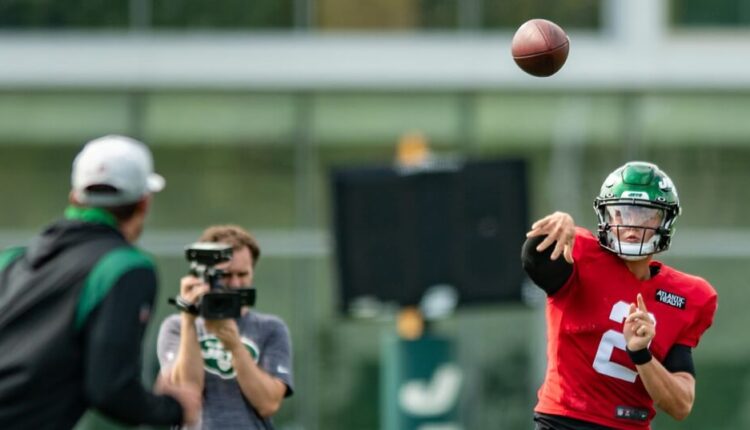 For Week 15, I recommended Tua Tagovailoa against the Jets, Justin Fields against the Vikings, and Taysom Hill against the Buccaneers. As noted in last week’s article, Tagovailoa predictably struggled a bit with Jaylen Waddle out but still had a decent floor and managed a usable no. 14 fantasy quarterback finish. Fields and Hill were both billed as risk/reward plays; Fields came through with a no. 10 fantasy quarterback finish, but unfortunately, as mentioned last week, Hill’s overlooked low floor outcome came to fruition.

It was a bit disappointing that Justin Fields scored just 16.9 fantasy points on Monday night against a Minnesota defense that’s struggled this season, but the silver lining is that the performance was still good enough for a No. 10 fantasy finish despite him having fumbled twice during that game. Fields ran for 35 yards in the loss to the Vikings, and his rushing production keeps him among the top quarterback streamers for Week 16.

He has a great matchup against Seattle this week. Long gone are the days of the Legion of Boom, as the 2021 Seahawks rank 28th in pass defense, and their 274 passing yards per game allowed to opponents is the most in the league. Even in tough losses to Green Bay and Minnesota in primetime the last two weeks, Fields has put on strong fantasy performances and can be relied upon again as a high floor and ceiling fantasy option.

As of Wednesday, Lamar Jackson still was not practicing due to the bone bruise on his ankle. If he were to miss another game, Tyler Huntley has shown to be an adequate replacement as a fantasy starter. Huntley has run for 40 or more yards in each of his last three games while filling in for Jackson, and like Fields, his rushing ability gives him a fair fantasy floor and high ceiling among this week’s quarterback streamers.

While the Bengals’ defense has played well this year, they’ve still allowed the seventh-most passing yards per game through 15 weeks. More importantly, they’ve struggled to stop mobile quarterbacks this season. Cincinnati allowed 88 rushing yards to Jackson when these two teams last met in Week 7, and the Bengals gave up 36 yards and a touchdown on the ground to Trevor Lawrence in Week 4. Even if Huntley were to struggle as a passer, he offers enough as a runner to make him a strong streaming option.

This year has been uglier than most. Reliable fantasy running backs and tight ends have always been in short supply, but even highly-drafted quarterbacks have been inconsistent this season. If your team is in dire need of quarterback help, Zach Wilson offers some upside. The rookie has struggled all year, but the Jaguars’ pass defense ranks second-worst in the league and offers a potential bounce-back for him in Week 16.

Jacksonville has given up the fifth-most passing yards per game, and they rank just 21st in pass rush win rate. Although Wilson has struggled overall, he’s played well when given a clean pocket since returning from his knee injury. On top of that, in his last four starts, Wilson has averaged three rushing attempts per game and has three rushing touchdowns over that span. While it’s a small sample size, Wilson’s willingness to call his own number near the goal line as of late gives desperate fantasy GMs some measure of hope.

In deeper leagues, if none of the above-recommended quarterback streamers are available, the Falcons’ offense has been stuck in neutral without Calvin Ridley, but Matt Ryan has a nice matchup against a Detroit defense that ranks 26th against the pass. And if you’re desperate, on the other side of this matchup, Jared Goff is currently on COVID-IR, but he could be a serviceable option as well if he’s activated in time for Sunday’s game against an Atlanta defense that ranks 30th against the pass.