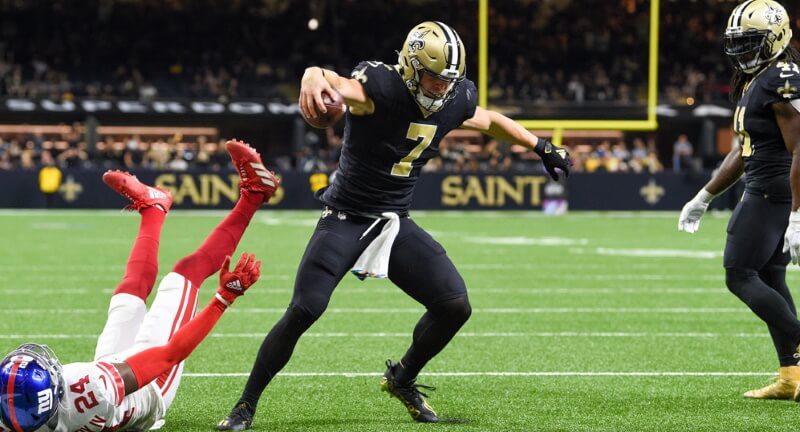 For Week 12, I recommended Cam Newton against Miami, Taylor Heinicke against Seattle, and Andy Dalton against Detroit. Unfortunately, Newton and the entire Carolina offense imploded with Christian McCaffrey hobbled by an ankle injury, and Heinicke didn’t need to do much in a low-scoring win over the Seahawks in primetime. Thankfully, at least Dalton delivered on Thanksgiving with a respectable No. 13 fantasy quarterback finish for the week.

Overall, Week 12 offered some workable options for fantasy GMs who eschewed drafting a quarterback early and have been streaming the position. If you drafted Kyler Murray early or managed to snag Tom Brady later on in your drafts, this article probably isn’t for you. But if you’ve been streaming quarterbacks or have Aaron Rodgers on bye this week, here are some viable Week 13 quarterback streamers with good matchups.

We haven’t seen Taylor Heinicke rush much in recent weeks, which is in part due to Washington’s commitment to the ground game. Washington has been the ninth-most run-heavy offense in the league this season, and they’ve been the eighth-most run-heavy in the red zone. This figures to continue with Antonio Gibson now back healthy from the shin injury that limited him earlier in the year. However, the Raiders are still a vulnerable defense to target this week.

Las Vegas ranks 24th in pass defense, and they’ve allowed the third-most points per game to opponents. And while Heinicke ran for just four yards against Seattle on Monday night, we’ve seen the Raiders struggle against mobile quarterbacks this season. Las Vegas allowed 86 rushing yards to Lamar Jackson in Week 1, 37 rushing yards and a touchdown to Jacoby Brissett in Week 3, and 61 rushing yards to Jalen Hurts in Week 7. Heinicke is atop this week’s list of quarterback streamers given his fairly high fantasy floor and ceiling.

Like Heinicke, Taysom Hill is an adequate passer who’s an enticing fantasy play due to his running ability. In his four starts last season while filling in for Drew Brees, Hill averaged 52 rushing yards per game and ran in four touchdowns. Sean Payton hasn’t yet committed to Hill starting on Thursday night as he recovers from a foot injury, but assuming Hill does indeed start against Dallas, his rushing floor and ceiling make him a decent option among the Week 13 quarterback streamers.

And while the Cowboys rank fourth against the pass thus far, in large part as a result of having feasted on turnovers, they’ve still given up the sixth-most passing yards per game to opponents. It helps, too, that New Orleans ranks sixth in pass block win rate and should be able to keep Hill clean in the pocket for the most part. If Hill can avoid pressure and turnovers, he has a fair passing matchup and can pad his fantasy stats with his rushing production.

While the Colts’ defense has played better in recent weeks, most notably in their 41-15 rout of Buffalo, the secondary has struggled for much of the season. Indianapolis ranks 20th in pass defense and has allowed multiple passing touchdowns to opposing quarterbacks in eight of their 12 games this year. If you’re desperate, Tyrod Taylor has played surprisingly well in 2021. Outside of the disastrous loss to Miami in his first game back from injury, Taylor has averaged 18.6 fantasy points per game.

Taylor is the riskiest of this week’s quarterback streamers, but with the Colts favored by 8.5 points, there’s opportunity for garbage time production. In their recent blowout wins, Indianapolis still gave up 209 yards and two touchdowns to Josh Allen in Week 11 despite his two interceptions, and in Week 9, Mike White and Josh Johnson combined for over 400 yards and four touchdowns with much of that coming in garbage time. Taylor also has some rushing upside, having already run in three scores this year in his five starts.

In deeper leagues, if none of the above-recommended quarterback streamers are available, Teddy Bridgewater gets a Kansas City defense that ranks 21st against the pass, though he’s risky playing through a shin contusion this week. And if you’re desperate, Tua Tagovailoa could be a serviceable option against the Giants. Even with New York ranking seventh against the pass, the Dolphins’ defense could give him some short fields if they turn over backup Mike Glennon.